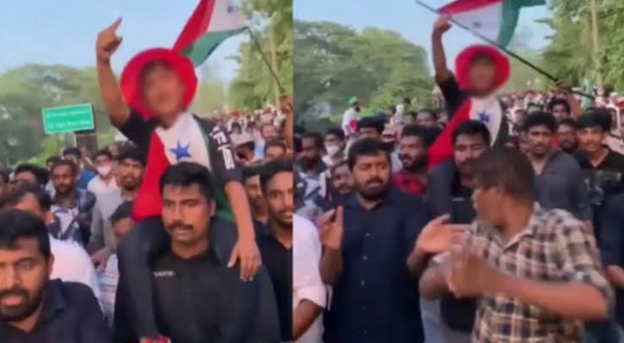 Kerala, the state which is excessively loved for its fascinating beauty residing in the mountains, and valleys accompanied by the undulated terrains inundated with enriched greenery which captivates tourists from all nooks and corners of the world, is rapidly becoming a fountainhead of some distressing things. A state which is intermittently lauded for its progressive, and reformative atmosphere, health, education mostly by the leftists as it’s only state where Communist party of India managed to save its root, is now nothing but a hotbed of hate, terror and ISIS recruitment. Oftentimes, the left ecosystem is aggressive against the central govt, they utilize the well molded image of Kerala, criticizing the BJP for its fictitious failures in providing safety, health and education, however, the claims of 100% literacy, health, employment and education seem to be completely hollow.

At this time, Kerala is unveiling its darkest, scary parts that shows how deadly the virus of hate is spreading in the state. A few days ago, an appalling hate tape of a minor Muslim boywitha flag wrapped around his neck, shouldered by a Muslim man shouting anti Hindu and Christian chants, and threatening Hindus to get prepared for genocide at the people front of India rally widely infamous for its extremism and involvement in violence across the country, went viral which exposed all the flimsy claims of communist party about their secular environment they flaunt in books, newspapers and films. The boy is seen shouting loudly with a crowd of Muslim men cheering with him, “Be ready for your death rituals if you won’t live in our land quietly. Be ready with rice flakes to fill your mouth, if you( Hindus) won’t live quietly. Be ready to burn amber in your home if you (Christians) won’t live quietly. Because we are coming, we are your death. We won’t go to Pakistan or Bangladesh, you have to live here as we say, or else we know how to make you live quietly, we will kill you even if we are attacked. As We take pride in being a martyr, we salute them. If you won’t live quietly, we know how to ask for Azaadi. Be prepared for your death, we are coming,” the PFIfanatics shouted in Malayalam.

The left ecosystem is silent, debunking their claims of zero communalism in the state. It’s expected from them, as its apparent now. They hit the roads with placards only against RSS and other Hindu organizations as their perspective of terror, and hate is riveted to Hindus. Moreover, it is undeniably hazardous for their ecosystem if they outrage against real hate and oppose this hate speech by extremist PFI as aggressively as they do against Hindus even if they fight legally for their temples. All the sophistry which we watch regularly on TV debates, social media where leftists accuse BJP for deviating youths from real issues like employment, education, and secularism, is indeed pernicious, for these people never tell us why Muslim youths of Kerala venture out to find jobs in the gulf, and Middle Eastern countries, if secular govt in Kerala is exceptionally adept at providing secular atmosphere, good education, and employment, besides, when asked these questions they equivocate as they know they can’t possibly hinder the ISIS recruitments in Kerala, instead, they weave lies and disperse them extravagantly in the country.

It’s so effing despicable to see these people with an ancient mentality that bamboozles them about the present time, and believe it’s same ruthless era of Islamic rulers where Hindus were dragooned to be silent even if Islamists destroyed hindu shrines, assaulted their women, creating a religious havoc in the society. As a result, this dastardly mentality that manufactures psychological and religious torture with non believers, has been thriving in this community against Hindus since the decline of despotic Islamic regime, making radical Muslims believe that they are still ruling India. Which is why their religious terror, snobbery and notorious actions of insulting other faiths, are noticeable outright, if opposition occurs, they want to threaten, terrify and torture Hindus on account of their psychological issues which generally stimulates them to behave like a ruler, and stifle the rights of other people, and muffle the voices that question them and demand people to live meekly and fearfully as the abetted minor Muslim boy said in the provocative video under their control like the days of Islamic reign, for they are a majority in the state. And as per liberal logics, this is neither hate they abhor, nor presents Islam, as these radical Muslims are not real Muslims. Arrant tripe! Yes but this is exactly how liberal Secular lobbies defend this rabble of blood thirsty fanatics and whitewash the sins from the hands of Muslims who secretly support such fanatics, and feign secularism until they are exposed.

It is a dire glimpse of hate currently being instilled in the minds of Muslims kids by the Islamic organizations like PFI for the purpose of Gajwa e hind, therefore, Muslims are being fed hate, and malice against Hindus with a nasty tendency of seeing and treating Hindus just like Aurangzeb era, and trap hindu girls for the purpose of love jihad, and torment them sexually, mentally, and emotionally until they convert or are killed. This organization is resurrecting this grisly mentality to start an invisible war against Hindus, they are continually fouling their minds with unbridled hate, enslaving their sanity to understand anything else, except their faith, its monotheism and its Kafirs theory. They are mentally forced to believe non believers are the real enemies mentioned in the Holy book whose plausibility can’t be oppugned, further they are taught to believe that  killing Kafirs is be a pledge of a Muslim, and for it, being killed is considered to be martyrdom. This contagious tendency is poisoning the entire community that follows a book which clearly justifies the murders of Kafirs. That’s explicitly a problem. However, saying anything causes a person to be murdered immediately. It’s because killing non-Muslims is in fact a reward for them, and it’s deemed a direct way to please their God and receive all the revelries after life as declared by Islamists. Consequently, attacks on Hindus for questioning this sheer intolerance and hate of Muslim community have unfortunately increased, and sadly, in these cases, the murderers are not condemned, abominated, or labeled terrorists, instead, they are referred as heroes by their supporters. That too in a country where intellectuals blame majority for communalism, but shove their heads in the sand when they are supposed to be unbiased and recognize this discernable, grosshate growing under the cover of minority status. Nevertheless, the govt is still in manacles of communal allegations to recognize these emerging threats for the nation, cradling the fabricated secularism which they too know, doesn’t exist. The piercing silence ofthe politicians, and biased hateful leftists over this Islamic hate, is evidently either caused by a fear of facing murderous consequences, or their affinity with terror, violence and hatred against Hindus.