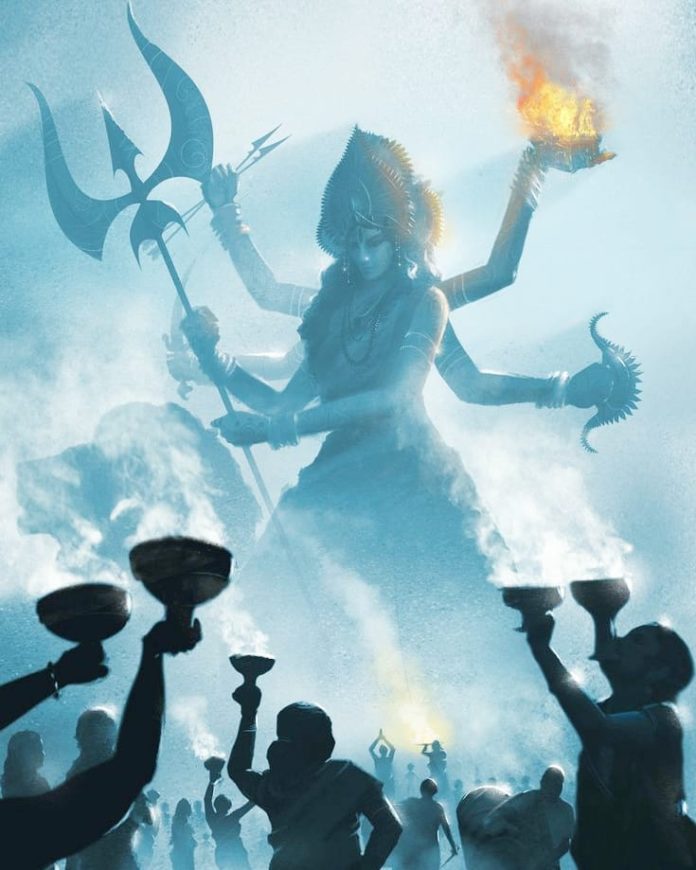 Navratri which means “Nine Nights” is celebrated to honour the Mother Goddess Durga.

There are spiritual, natural and historic reasons why we celebrate Navratri for nine days and twice every year.

At these seasonal junctures, Mother Nature undergoes a major change, and that is welcomed through the Navratris by celebrating Goddess Shakti, who is an embodiment of Nature itself.

Both the Navratris witness temperate weather conditions which is just perfect for big celebrations.

In Ancient Hindu History, it is believed that Lord Rama started the tradition of celebrating Navratri just before winter. He performed Durga Puja before he left for Lanka and returned victoriously.

In both of these Navratri’s devotees invoke Mother Goddess Durga who represents the Supreme Energy of the Universe. She is the inherent energy which propels the work of creation, preservation, and destruction. The meaning of “Durga” is one who removes miseries.

The festival of Navratri celebrates Nine nights dedicated to the nine divine forms of Goddess Durga.  A Hindu festival symbolizing the triumph of good over evil, Navratri takes place at the beginning of October around harvest time and, as the name implies, is celebrated for nine days. On the tenth day is Dussera which celebrates the victory of Lord Rama over Ravana. An effigy of Ravana is burnt; often giant dummies of Ravana stuffed with fireworks are shot with arrows until it blows up. Navratri in Gujarat is celebrated with dandiya, and garba-raas.

Goddess Durga symbolizes the divine forces (positive energy) known as divine shakti (feminine energy/ power) that is used against the negative forces of evil and wickedness. She protects her devotees from evil powers and safeguards them. Goddess Durga represents the power of the Supreme Being that preserves moral order and righteousness in the creation.

There are several mantras for Goddess Durga, but the most simple and easy mantra to remember is “Om Sri Durgaya Namah.” It is believed that by chanting this mantra regularly the Divine Mother will remove the physical, mental and worldly problems in life and shower us with her unlimited blessings.

People worship her with full devotion so that Goddess Durga can remove miseries from their lives and fill their lives with happiness, joy, and prosperity.

Why is Navratri Celebrated for Nine Days?

We worship various forms of Goddess Durga on Navratri with full devotion and dedication.

Navratri honors the three essential aspects of the Supreme Mother Goddess Durga in the form of Kali, Lakshmi, and Saraswati.

On the first three days, the Goddess is worshiped in the form of Kali who is the destroyer of all our impurities.

In the next three days, we adore Goddess Mother in the form of Lakshmi who is considered as the giver of inexhaustible wealth.

In the last three days, the Goddess is worshipped in the form of Saraswati, the giver of knowledge and wisdom.

The eighth day of the festival is popularly celebrated as “Ashtami” and the ninth day as “Maha Navmi” and even as “Ram Navmi” on Chaitra Navratri.