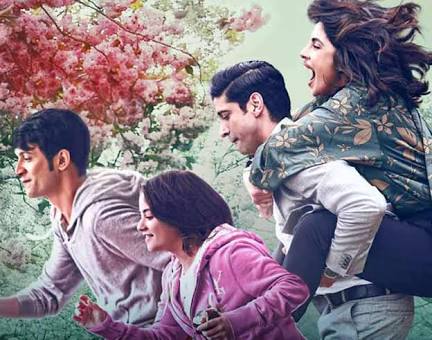 Making a film that deals with death, devastation and loss is as tough as watching it. I still remember feeling numb for days after watching Shoojit Sircar’s October. And when Vicky Kaushal howled in Masaan with his “ye dukh khatam kaahe nahi hota?” I felt vulnerable. But The Sky Is Pink neither takes itself too seriously, nor death. The director Shonali Bose, who surprised us few years back with critically acclaimed Margarita With A Straw, has upped her game with this and she definitely demands major attention. In some of the scenes she makes you uncomfortable and then suddenly she makes you smile like she owns you with a spell. In scenes where we expect dramatic music filled with some haunting background score, there are peppy tunes to lighten the environment. In scenes where we expect characters to cry and faint, they rather stand up and kiss.

This film is based on the true story of Aisha Chaudhary (played beautifully by Zaira Wasim) a high-spirited teenager, who lost her life to Lung Fibrosis aided by SCID. Her parents are at the centre of this narrative and the story moves back and forth continuously as the relationship between the two evolve. One of the many things that this film gets right is the casting choice. Farhan Akhtar as Aisha’s father is effortlessly brilliant. Priyanka Chopra is terrific as Aisha’s determined mother and there couldn’t have been a better comeback for her (If there is something like an actor’s comeback).

When it comes to treatment The Sky is Pink is brave- right from the word go. The characters here talk like humans (sadly but very Indian films manage to have dialogues like this). Their complications doesn’t look fabricated and it often feel like they have a real bare soul. Also, the screenplay is clever and they add to the narrative very well. Troops such a Priyanka’s hairs, or The Pet Dog, or the varied locations are smartly used to easily differentiate between the continuous flashbacks.

The only problem I had with this film was its length. When the audience knows what is coming in the final act of the film there is no point meandering around to create suspense (or should I say- to Bollywoodise it.) One of the scenes involving Christianity Conversion or something like that was hazy and looked underdone.

Nevertheless, The Sky Is Pink is a film to feel. It gives you answers and then lets you frame your own questions. So, what if your sky is not blue? Relax, everyone has their own sky. Every sky has its own colour!