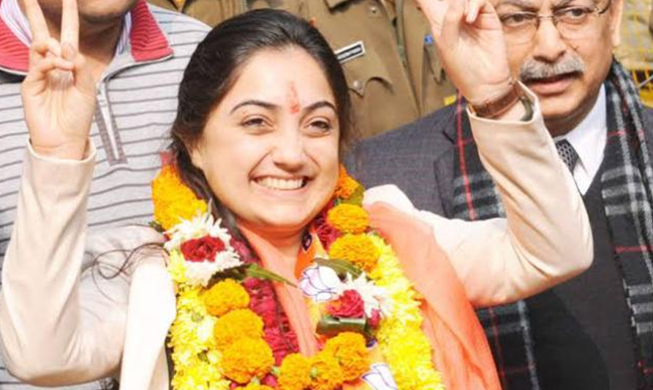 An alleged controversy has elevated the temperature in India faster than the scorching heatwaves, intensifying the current religious matters, specially the ongoing case of disputed Gyanvapi land. A former national spokesperson of the ruling party Nupur Sharmaduring a debate over the claim of Hindu community finding a Shivling inside the present site of disputed mosque, while retorting to a Muslim speaker affronting hindu faith incessantly, she expressed her objection against him, and further reminded him of the Islamic culture, telling him to look at his own religion before commenting on others. On account of being forced to listen to him mocking Hinduism fearlessly, her tolerance diminished. As a result, in a whim, she angrily stated a few hadiths from an Islamic book Sahih Al bukhari and further questioned the nature of marriage between Prophet Muhammad and his wife Aisha, elaborating how a 56 years old man married a 6 years girl, and consummated his marriage when she was 9 years old.

What she said, canbe politically wrong, but factually correct. Provoked, she didn’t enunciate an appropriate word ‘consummation’, instead she whimsically used ‘Sex’, creating an unexpected controversy after a so-called fact checker Muslim journalist purposefully vitiated that video and presented it as hate mongering and absolute insult of Prophet Muhammad, cunningly concealing half truth. Consequently, a bloodthirsty rabble of Islamists from all parts of India began a rumble of death and rape threats against Nupur. The intensity grew up unexpectedly when Islamic countries summoned Indian ambassadors and sought an apology from India which as expected gladdened Indian Muslims and political parties.

Nupur has been suspended from the party, as the ruling party is clearly not willing to be labelled communal, although it’s already known as a communal party by secular lobbies. So, abandoning a party member was certainly the best option Bjpopted for. Despite clear abandonment from the party and the grisly death and rape threats against her and her family, She didn’t choose to bend over. As far as hurting Muslims sentiments was concerned, she took her statement back and offered a satisfactory reason which Islamists are never going to accept. She explained why she had to retort in this way, as she couldn’t tolerate Muslim speaker mocking Shivling repeatedly, which was deliberately cut from the viral video for a propaganda against her, and vented herspontaneous anger.

At this juncture, India is terribly wading through a deep mire of pernicious tendency which fouls the definition of secularism and makes people believe that secularism is respecting all religions equally, but not Hinduism. This is actually ridiculous, but it’s categorically an irrefutable fact. On the debate, Muslim expert was continuously speaking disdainfully against Shivling, reminding Hindus of the audacity which emanated from social media, and nobody was bothered. From politicians to actors, journalists all profusely made fun of Hindu faith, fearing no death threat, or legal action as hindu tolerance is prevalent and quite convincing. However, this time a Hindu boldly stood against their sheer effrontery, and exhibited her spunk to speak for her religion when tolerance is not appreciated by those habitual offenders.

It’s unquestionably amatter of pride that Sanatan dharma is charmingly sane and advises Hindus to respect and have affection for all religions, people, and nature. Unlike Islam, there is no direct beheading theory against people who question or affront the religion. For, it strongly promotes tolerance and allows the compounded curiosity of people hankering for questioning Hinduism, however, it also behests Hindus not to be meek if any attempt to insult hindu deities is made, explaining the importance of action as to why retaliation is also a part of Dharma.

Being encouraged by her own faith, she said what was necessary at the moment when tolerance was tested, attracting a bloodthirsty rabble of Islamists lurking to behead her as intolerance is an inextricable part of their belief system. From young Muslim boys peeing on her photos on the streets to journalists and fledgling politicians urging to hang her publicly, all these disturbing events happened in a secular and democratic India. Initially, Nupur Sharma controversy seemed to be innocuous, but after these threats, it has rapidly enlightened Hindu community about this Islamic menace that’s stealthily growing which promotes intolerance against Hindus on the pretext of blasphemy, and encourages hinduphobia.

From this controversy, Hindus have realized that the tolerance they flaunt, is actually a funny delusion which is not even admired. Instead, it is clearly a false sense of pride injected in Hindus which mentally asks them to take any kind of insult of their faith. Nupur Sharma has unmistakably cleaned this dirt off their minds, and showed how tolerance is just a sign of cowardice if it entertains Muslims who don’t have any respect for Hinduism, but expect Hindus to revere their prophet. She unleashed the reality Hindus turned a blind eye to for centuries that proffering flowers to an armed terrorist is as dangerous as showing tolerance to the intolerant.

As soon as the entire Muslim community assembled, yearning to behead her, it ended up awakening Hindus who are manacled by secularism. The entire hindu community is now standing and supporting Nupur Sharma for her defiance exhibited on debate, standing for her Dharma unapologetically, exposing all secular and liberal lobbies who are avowedly progressive but unbelievably coward when it comes to standing for the right thing.  She debunked all the figments which we are routinely fed by secular politicians that India has democracy, but never tell it’s only for minority. Freedom of express is a privilege for Muslims, but it’s a blasphemy if hindu uses it.

I reckon that the end of the culture of mocking, hating Hindus for unbridled rancor of liberals and Islamists is imminent. Nupur Sharma has precipitated a trouble for hypocrites who will know how insulting other religions tastes like. As expected, Muslim journalists are obsessed with making these shameless, hateful offenders look innocent, and scared with the prevalent narrative of showing Muslims in a hazardous condition that remained intact for centuries. However, this is categorically a new dawn for Hindus which illuminated a path brimming with reality. What nobody could ever think to do, she has done it with her intrepid statement which made Islamic countries quiver with frustration and seething hatred which they fail to hide in their white gowns and a deceitful notion that Islamists want peace, but the question is how, by beheading someone who stands for her dharma against those who couldn’t learn to respect other religions.

Hinduism has always taught us to revere women incomparably as our ancestors were familiar with prowess, intelligence and dauntlessness of women, creating a significant culture which emphasizes on worshiping unconquerable womanhood as Durga, Sarasvati, and Laxmi. Millions of Hindus including Naga saints are standing by her side, whereas, Islamists are still in dilemma whether they should clarify what Nupur Sharma state, or instigate radicals who are mentally enslaved to be killed for beheading someone for their religion.Here, what’s more hilariously absurd, is how they are cunningly avoiding to correct her statement if they think it’s wrong. If they are not willing to correct her with some convincing  Islamic facts and elucidate what she quoted from sahih Al bukhari isn’t what they adhere to, then they are simply implying that they justify pedophilia, nonetheless no Hindu can question it, and it’s patently okay if a Muslim scholar utters the same words like Nupur Sharma.