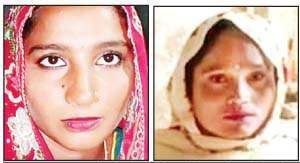 I wait for the day when I don’t have to read this news. Sadly, it has been going on for over one thousand years, and Sindhi Hindus in Pakistan are now on the verge of total extinction. Social media has proven to be a medium where even nations like Pakistan have had to bend their knee in previous cases. So, here is the depressing news of the day. Trigger Warning.

According to media reports from Sindh, Guddi Kolhi, Ria Bheel, and Rekha Kolhi were abducted and converted. They have been married to their kidnappers at a local ‘Dargah’ (Mosque).

Ria Bheel, a mother of three kids and daughter of Nazir Bheel residing in Garibabad town of Kandhkot district, was kidnapped and raped by Ali Hassan Lashori Baloch. She was converted and married to her abductor by the mullahs.

A minor Rekha Kolhi resident of Kunri Shehar township was kidnapped and gang ra… ( my fingers shiver typing this) by an already-married Muslim man three times her age whose name could not be immediately known.