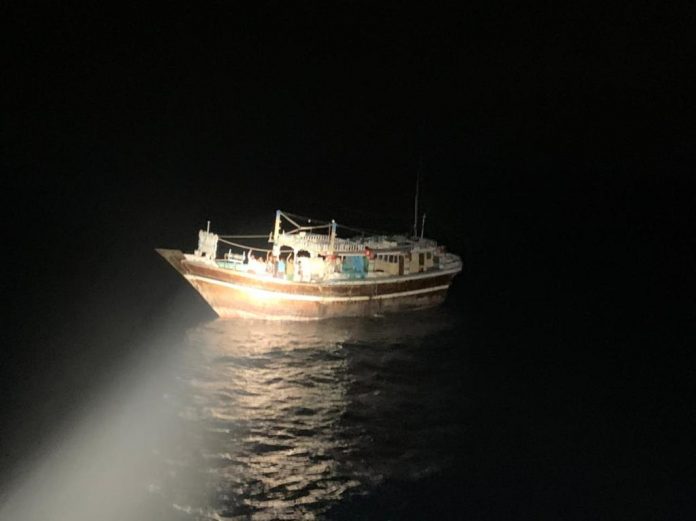 When you consume drugs in India, the money you pay goes to Pakistan, and Pakistan uses that money to send terrorists across borders and attack India. You’ve heard this before, and this is a piece of general news that the world knows. However, what you don’t know is this. Wait for it.

Recently, I received a recording from Pakistan, intercepted by India, and you can hear drug peddlers scared for their life.

Gujarat ATS, in collaboration with Coast Guard, caught 9 Pakistanis who were crossing the India-Pakistan Marine border. They were caught with 56 kgs of heroin worth 280 crores from a boat named Al-Haj. They tried escaping but could not due to the firing of gunshots from the Coastguard.

Later, the Gujarat ATS, after taking out the complete information of the receiver of this consignment, carried out separate operations raids one after the other in Delhi, Muzaffarnagar, and other towns with NCB and caught 351 kg of heroin worth about Rs 1500 crores. Gujarat police with the NCB arrested Raji Haider, Imran, and Sunny. A consignment of the same drugs mafias was also caught from the Attari border where 100 kg heroin was seized whose investigation is still going on.

After this raid, there is so much fear of Gujrat ATS in Pakistani drug markets that now these mafias are not getting any Pakistani drugs supplier who could supply drugs in India. Pakistan’s drug Mafia Haji Hasan had to send his son and his son-in-law to smuggle drugs, but they were caught and locked in Gujarat Jail. This is the biggest ever strike by ATS against drugs in India.

This is not all. There are ten such operations that I will share in the next part of this series.

Thank you, Home Minister of Gujarat Shri Harsh Sanghavi, sir, for helping me with the information. Thank you for keeping Gujarat safe and supporting India’s war against drugs. You’re the best performing minister I’ve ever come across.