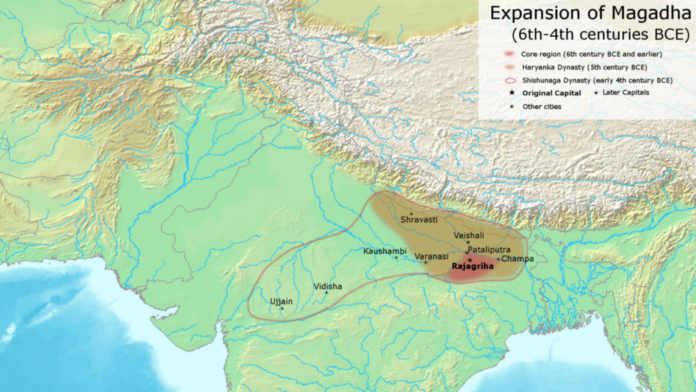 The Haryanka dynasty was an instrumental part of the ancient Indian Empire. It was the second dynasty to reign over the Magadha territory. It was then taken over by the Barhadrath dynasty. The Haryankas started ruling in the 6th century BCE, The Shihunanga dynasty took succession to the Haryankas. The capital of Magadha during this reign was the magnificent city of Patliputra. Even though the roots of the dynasty goes back to Brihadaratha who is said to have laid the founding roots, Bimbisara is the popular founder of the time when the dynasty started growing and expanding in the 5th century BCE. He became king at the age of fifteen and was later succeeded by great and prominent rulers in Indian history.

Bimbisara was the founder king of the Haryanka dynasty. He was the sn of the chieftain Bhattiya and became the monarch in 543 BCE. He fortified a village in Magadha which later came into existence as Patliputra. He is known to have used matrimonial alliances to hold power. His first marriage was with a Kosala princess which got him Kashia as a dowry. The relations between Magadha and Kosala were resolved in this alliance. He also had matrimonial alliances with Viashali and Madra which were neighbouring clans. He took many wives to strengthen his empire. He is said to have met Buddha and became a devout disciple. Thus, Buddhism prospered in his reign.

Ajatshatru was the son of Bimbisara. He conquered the cities of Vaishali, Kashi and Kosala and several other surrounding states to establish a large empire. This comprised of almost all of Northern  India today including the regions of Bihar, Uttar Pradesh, Himachal Pradesh , Madhya Pradesh and West Bengal. He fortified Patliputra and strengthened the defense mechanism to establish a powerful capital. He reigned from 493 to 462 BCE and married the princess of Kosala. He later conquered the Vriji and Vaishali regions as well. His kingdom was motivated by the teachings of Gautam Buddha.

Udayin ruled over Magadha in 460 BCE. He was the son and successor of the great king Ajatshatru. He utilized the resources of the Son and Ganga rivers to strengthen the capital and establish power. He was the ruler who officially shifted the capital from Rajgriha to Patliputra to access a more central and powerful location. This was a prominent act in history for the establishment of Patliputra as a strength in the empire. He defeated Palak the ruler of Avanti in several encounters but was ultimately defeated by him. This was also an era where Buddhism was well appreciated.