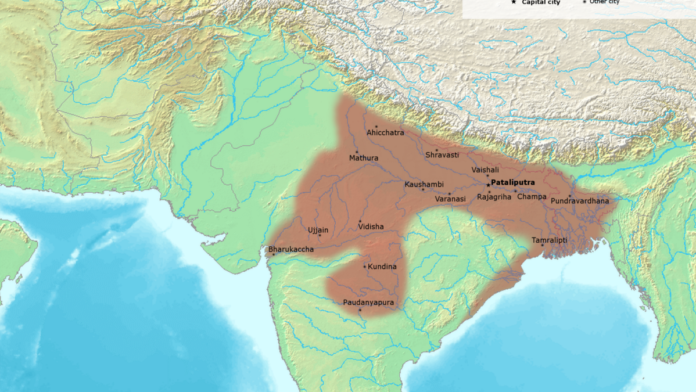 The Shishunaga dynasty was the third ruling dynasty of Magadha in the 4th century BCE. Shishunaga, who is the founder of the dynasty, was originally the amatya or minister of the Haryanka dynasty who overthrew the ruler Nagadasaka and became the king. He came to the throne after the rebellion in 421 BCE. This dynasty ruled one of the biggest empires that are known to have existed in the Indian subcontinent. They overthrew the Pradyota dynasty of Avanti. This was an important event in history as it brought an end to the century old rivalry between Avanti and Magadha. Thus, Avanti and Magadha were consolidated. Kakavarna was the succeeding ruler of the dynasty. He was the governor of Varanasi who later became king. He held the Second Buddhist council at Vaishali in 383 BCE. This empire was later taken over by the Nanda dynasty ruled under Mahapadma Nanda.

The Nandas came into power in the 4th century BCE. They succeeded the Shishunagas in Magadha and continued to further expand their empire towards northern India. The Nanda rulers reigned from the 345 to 322 BCE. This included Ugrasena, Panduka, Pandugati, Bhutapala, Rashtrapala, Govishanaka, Dashasiddhaka, Kaivarta and Dhana Nanda as the lineage of rulers. The Nanda rule focused towards a centralized administration building on the pre-existing system. The gathered great wealth and introduced newer currency along with a proper taxation system. Following the rule of the nine Nanda kings over a period of two decades the last Nanda ruler was overthrown by Chandragupta Maurya.