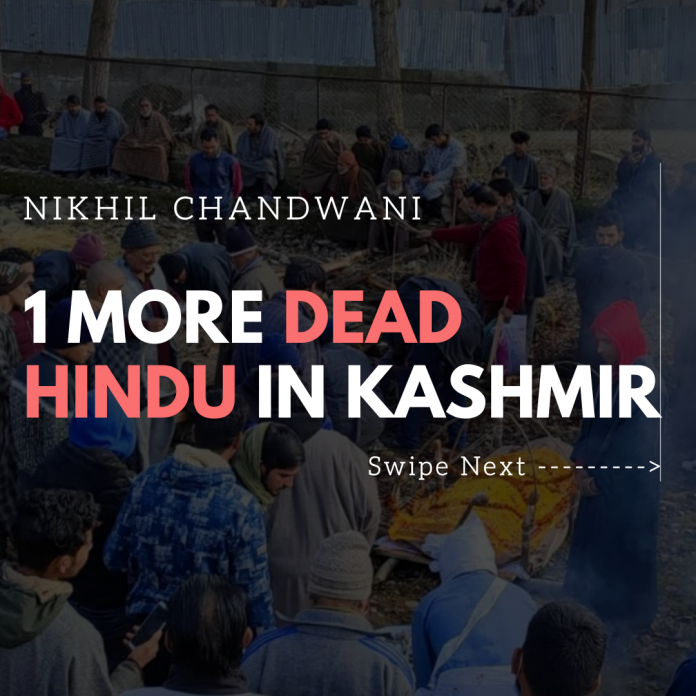 Kulgam, a town in Kashmir, is in the news today.

The lower portion of Kulgam is located on Kaval banks, an offshoot of river Vashiv. Almost all offices function in this region. A scenic nullah Vashiv irrigates the fertile lands of the Kulgam area. Kulgam is called the granary of Kashmir Vally. The landscape of Kulgam is picturesque, and small streams of ‘orchards surround it.’ However, this land has seen blood, lots of it, for thousands of years.

It is the place that has seen invaders trying to rip Hindu culture apart for a thousand years. The invaders chose this place as a gateway to other parts of India with the intent of unleashing hell and converting locals forcefully. But Hindus resisted, and although the invaders were able to convert 95% of the region and murder thousands of others who resisted, 5% of Hindus still remained.

Among those is Rajasthan-born Vijay Kumar, who worked as a manager of Elaqahi Dehati Bank. A resident of Hanumangarh district in Rajasthan, Kumar had recently joined his posting in Kulgam.

Today, he was shot dead by terrorists in Kulgam. He was made a target because of his religion. Targeted attacks on Hindu and Sikh migrant workers and local Hindus in Kashmir have been going on for centuries now. We know how it can be stopped, but human rights activists would try to derail our nation if we take these steps.

The government must not be scared of these ‘WOKE’ Human Rights Activists and clean the valley from every invader and invader supporter possible. It’s now or never to clean Kashmir and reclaim the land of Kashyap. It’ll hardly take a month. If not now, then never. It’s time to clean the valley, reclaim our land and use force to bring back the Land of Kashyaps to India ASAP.

The more we delay, the less Hindus will remain in the region to help us reclaim what we lost. Our delays are problematic and that is something we must understand.

Kashmiri Hindus have backed the present ruling government since decades now. BJP must deliver on her promise, and Modi must direct the army to shoot on sight everyone who’s backing the militants. People who pelt stones at Indian army and support terrorists should be neutralised without the fear of any Human Rights Group. We don’t want these terror sympathisers to live amongst us. Shoot them, clean the valley and help us reclaim what’s ours.