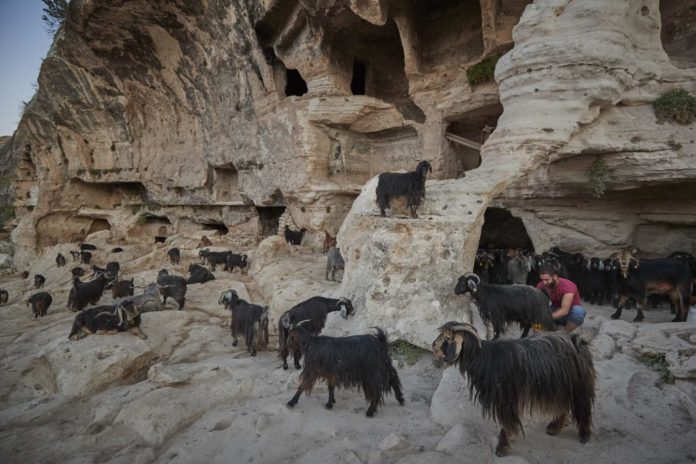 Ask shepherd Ramazan Agalday how long his family has lived in the ancient city of Hasankeyf in southeastern Turkey, and his rheumy eyes cloud over.

“I am 80 years old and I was born here. So were all my ancestors before me and their ancestors before them; it’s been a long time,” he says, tapping his walking stick while catching his breath after the steep climb to the man-made caves in the limestone cliffs where he keeps his flock.

For up to 12,000 years, the Tigris River has sustained the people of Hasankeyf, one of the oldest known human settlements. Now time is running out for the ancient town. Soon a controversial dam project will swell the Tigris until its waters swallow the city whole.

Then, this historic crossroads of empires and cultures and one of the cradles of human civilization will disappear.

Today, after decades in limbo battling to save Hasankeyf, residents have been told they must leave by Tuesday, when the dam will close and the water begins to rise.

Agalday says he has no idea where he will go. Like many here, he cannot afford one of the 700 new homes built in the parallel city of New Hasankeyf, built on higher ground on the other side of the Tigris. Besides, he has been told he cannot take his sheep and goats.

“I will have to sell them. What else can I do?” he says, tapping his stick harder.

The $1.3-billion Ilisu dam spanning the Tigris 46 miles downriver toward the Iraq and Syrian borders is a massive structure — 453 feet high and nearly 6,000 feet wide. It’d been planned for more than 60 years and was finally completed last year.

The Turkish government says it is part of an ambitious hydropower and irrigation project to boost electricity supplies in the region and, with luck, usher in an economic boom.

Yet residents are skeptical they will reap any benefit, and scientists believe the human, historical and ecological toll is too high. The dam’s reservoir will cover 121 square miles, displacing about 15,000 people in the region and consigning 300 archaeological sites and settlements to the depths. In Hasankeyf, where the water will rise by roughly 200 feet, 80% of the city will vanish.

Appeals to the United Nations to declare Hasankeyf a World Heritage Site and spare it from the floodwaters have failed. The ancient city ticks nine of the 10 required criteria boxes, but the Turkish government must first apply for conservation listing, something it has declined to do. A separate appeal to the European Court of Human Rights to stop the dam also failed.

Over the millenniums, more than 20 different cultures have left their mark on Hasankeyf, which sits in the Fertile Crescent in a land once known as Mesopotamia, making it a living record of human evolution. Its treasures include roughly 4,000 cave dwellings carved out by Neolithic settlers, a 12th century Byzantine palace, a 15th century tomb tower decorated with glazed blue and turquoise tiles, the remnants of a 12th century bridge thought to have been used by Marco Polo on his way along the Silk Road to China, and the traces of a Roman fortress.

Today the postcard-perfect view of Hasankeyf from the east bank of the Tigris has largely been erased. The great palace is encased in concrete, ready to be submerged, and seven of the city’s most impressive buildings have been moved to the new town, either dismantled and rebuilt or lifted onto wheeled trolleys and dragged across the bridge.

Zeynep Ahunbay, professor of architectural history at Istanbul Technical University, believes at least one-third of Hasankeyf’s historical treasures — many of them excavated — will be flooded.

In a 2006 report to the International Council on Monuments and Sites, which works for the conservation and protection of the world’s cultural heritage, Ahunbay insisted that the survival of Hasankeyf should take precedence over “short-term economic prosperity.”

“Public opinion and scholarly concerns back up the view that short-lived dams should not be permitted to devastate culturally abundant lands,” she wrote. “Hasankeyf should not be ‘Doomed by the Dam.’ ”

At a cafe on the eastern bank of the Tigris, tourist buses disgorge visitors who take photographs and sip sweet tea or bitter Turkish coffee while dangling their feet in the Tigris. Tourists used to wander into the city; nowadays, more often than not, they jump back into their buses and disappear.

Over the bridge, the old city’s bazaar — lined with shops selling souvenirs, trinkets, kebabs and goatskin and kilim rugs — is deserted.

Shopkeeper Arif Ayhan’s eyes brim with tears as he sits outside his rug store and talks about leaving Hasankeyf. He received two official letters ordering him to go, but says he sent both back.

“I don’t want to leave here. I will protest, but what can we do? We cannot stay when the water comes. This is our home and it will be destroyed along with our history, heritage and culture,” he says. “My parents used to live in the caves. It was a hard life, but they look back on those days and say we were poor but we were happy.”

“I have lived here all my life and my grandparents and their grandparents who used to live in the caves. Why has the global media remained silent, why doesn’t it do something?” he said.

“Hasnkeyf is like an open-air museum. It’s a place of historical heritage. It’s unique. And it’s not just my heritage or the people of Hasankeyf’s but a world heritage.”

Deniz Tas, 38, a kebab chef in a Hasankeyf restaurant, sits amid his family’s worldly goods in the back of a green flatbed truck, ready to head over the bridge to the new town.

“My family has lived in Hasankeyf for more than 500 years,” Tas says. “We used to live in the caves. Of course I am sad to leave, but my wife and I are lucky to have a house in the new town to go to.”

Most of the 3,000 people who live in the ancient city have already left for the cookie-cutter, sand-colored single-story homes on the unfinished rubble-strewn streets in New Hasankeyf. The new shopping mall there is empty and deserted, as are most of the homes. The requirements for buying one of the new homes have been complex and shifting. Single people, for instance, are not eligible, and for many the government simply didn’t give them enough for their old homes to afford a house in New Hasankeyf.

Hasankeyf is in a predominantly Kurdish region and until 2015 was a stronghold of the Kurdistan Workers Party, known as the PKK, which was engaged in a struggle with the Turkish government that had declared it a terrorist organization.

Cetin Bato, 38, of the Keep Hasankeyf Alive lobby group, is one of a few brave enough to voice the widespread local belief that the Turkish government has an ulterior, political motive for the flooding: to disperse the opposition Kurdish population and thwart any hope that the Kurds in southeastern Turkey, northern Syria and northwestern Iraq can form an independent Kurdistan.

“Our protests have forced backers to pull out and forced constructors to stop constructing, but the president has said, ‘I will build this dam.’ He is determined, and the main reason is to crush the Kurds,” Bato said.

“They are deleting our history. Civilizations are based on their history, and if you destroy that, you destroy them,” he said. “And that’s the aim.”

John Crofoot, an Arkansas resident and expert on Arabic and Turkish literature and culture, lives part time in Hasankeyf. Turkey is destroying a “unique artifice of medieval Islamic civilization,” he says, as well as the biodiversity of the region.

“It’s just wrong,” Crofoot says. “It’s not just that it’s home for the people of Hasankeyf who don’t want to leave; this is a huge cultural and historical loss of a site of universal culture and heritage.”

The mayor’s office in Hasankeyf and other government authorities did not respond to efforts to contact them.

The Turkish authorities began filling the reservoir last year but stopped after drought-plagued Iraq requested it keep the Tigris flowing. In this arid part of the world, locals fear the dam will spark “water wars” with Turkey’s neighbors who depend on the Tigris.

“For the last 100 years, there have been problems with our neighbors because of a lack of water,” he said. “Changing the course of rivers changes the world.”