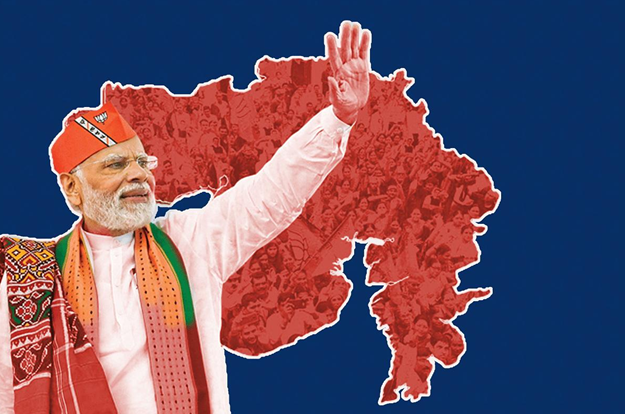 Gujarat has transcended beyond expectations in all fields, accelerating development, and establishing harmony and economy under Bjp government. Which is why Gujarat model is widely discussed almost in all elections, and Bjp utilizes it excellently, convincing people of India to believe in its visions. Bjp managed to remain in power for 27 years, fulfilling its promises and strengthened the Gujarati identity across the nation. It is apparent that politics is an ocean of maneuvers, lies, promises, conspiracies, and a lot more engraved in political tongues. The state that economically shines, where only development and euphonious sounds of cultural occasions are seen, became a fountainhead of headlines even since the election dates were announced and a flock of politicians embarked for Gujarat mission.

Exhilarated over winning Punjab, Kejriwal platoon over excitedly rushed to Gujarat with dreams of snatching the state from Modi. And his penchant for constant chuntering about self obsessive malarkey and concocting fictitious stories to bluff people in order to fetch votes, was lionized by the media. While the congress party was busy in Bharat Jodo Yatra despite knowing what they should really unite, is their own party. On the other hand, Kejriwal was badly fixated on daydreaming about defeating Bjp so fiercely that he even announced whowas going to be new chief minister of Gujarat. How ridiculous!

Currently Indian politics is transmuting into hate and disgusting tactics to win elections and this is rapidly being normalized which we can easily see in Aam Aadmi party. Kejriwal’s party has squandered money in Gujarat elections like an old political party, advertising his fictional Delhi model, disseminating wrong information to traduce people in big rallies, and promoting freebies culture to lure voters. Perhaps, Aam Aadmi party was not familiar with the Gujarati who, like people of Delhi, don’t fall for freebies, compromising with safety, security and development which Delhi hardly saw under his leadership. Despicable politics started when Morbi bridge collapsed, and hundreds of casualties happened in this catastrophic incident, which Kejriwal and his political vultures politicized and disparaged Bjp in Gujarat. All attempts to tarnish the image of Modi through this unfortunate event, were desperately made by congress, and Aap equally. Congress leaders vilified Modi due to frustration, whereas Aap didn’t scruple to prophesy a bumper victory over Bjp in the elections. No party in entire Indian politics behaved as desperately as Kejriwal so far.

Sensing the accountability, Bjp has managed to thwart these sordid attempts of dirty politics made by Aap and congress over the deceased. A party that was born in a movement in Delhi, is now overconfident and uncontrollably behaving as if its lies will be bought everywhere like Delhi. Therefore, Kejriwal badly addicted to manufacturing figments about others, insanely spread a new lie that central govt has asked investigation bureau of India to do a survey to know the public response regarding Gujarat elections, he with a risible laugh stated that Bjp is afraid to lose Gujarat, and now IB report has claimed Aap is winning Gujarat. He brazenly sold this type of lies and his peers in media ballyhooed them vigorously as planned, which 10% of Gujarati have bought without any sane consideration.

The question arises, is this appropriate to mention national agency for dispersing political lies to win elections? Or Kejriwal is considering himself above the national agencies which he uncontrollably thinks, are for personal use and absolutely harmless as it doesn’t inflict any damage, however it should be punishable. Despite theseabhorrent attempts to bamboozle public, AAP adversely fared in Gujarat elections alongwith Congress, losing itself in the figments of Kejriwal, and slangs of Congress leaders respectively, whereas Bjp has scripted history in the annals of Gujarat by clinching a thunderous majority, winning 156 seats solely, and pulverized the hallucinating Aap and abusive Congress party.

Gujarat elections must have taught all political parties specially congress and Aap that neither alluring freebies and amusing lies nor abusive behaviors are necessary to fetch votes. What attracts and binds voters to a party is, how fairly it works for the betterment of the state as well as fulfils its promises in five years. Congress leaders comparing Modi with Ravan was enough to paralyze the emerging hope in people for congress, as Modi is not limited to a political identity, he is beyond imagination. People of Gujarat holds an unwavering reverence for him, not only what he is now, but also for what he has done for the development of Gujarat, overcoming all the hurdles bravely, and erased all distressing issues completely. Furthermore, he is uncompromisingly considered the pride of Gujarat. Anything for a political figure can be said, provided parties maintain decency and decorum. They shouldn’t allow frustration to unchain their abusive tongue to utter something this disgraceful which later on precipitated existential crisis for congress in the state.

In a frenzy of fleeting euphoria, Aap has made inane statements like its leaders did during Punjab elections, and fortuitously their written statements came true and surprised all people. However, such desperation to announce victory even before the election dates depicts how insanely enthusiastic Kejriwal and his ilk were to crush Bjp bastion. Even destiny wanted to clout Aap and Eventually showed the reality about where Kejriwal stands and where stands Modi. Moreover, even Congress might contemplate its decline in Gujarat, and work on teaching decency and proper demeanor for healthy politics in the country as public is not deprived of political options to choose, and now Indiansarecertainly not willing to buy slang and lies, when they can choose development, safety and opportunities. This is an quintessence of good governance. This is categorically interesting to see that not all people blindly believe new leaders who purport to be educated, and sane, like Kejriwal who failed Delhi unimaginably where schools are built in newspapers, where river looks like a cloud of foam, where air is poisonous, where rohingyas get homes, while Hindus refugees from Pakistan are neglected, where government focuses on advertisements and soirees with friendly media, rather than development.

It is foolish of Congress and Aap that they thought Bjp is winning Gujarat by doing nothing like them, deliberately refusing to see the development and economical, cultural growth of Gujarat. Aap ballyhooed its Delhi model of education, ironically, when its Education minister is involved in a liquor scam. Bjp wins not by disgusting maneuvers, politically embellished lies, and freebies, this party wins for the works its leaders do on the field, establishing unmatchablefaithin people for the party which no allurement of freebies, no amount of lies, no abusive behavior can possibly decimate.