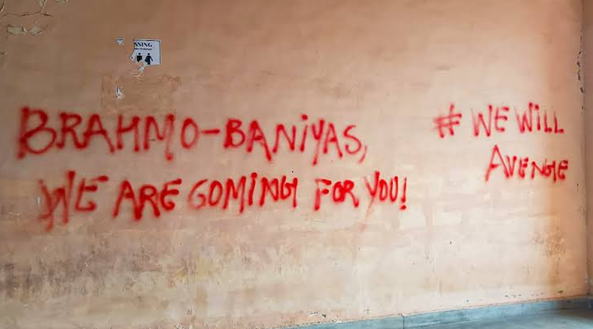 Jawaharlal Nehru university is undeniably a land of controversies, conspiraciesand chaos where traitors who are now purporting to be the voice for uniting India with Congress, had shouted to break India, where students forget to leave the campus due to addiction of free food, stipend, and golden opportunity to be hired as an activist by any political party which extols their ideology. This is the place where even the greatest minds of India studied, but now university is smeared with indelible shame routinely caused by the struggling feeble communist roots. JNU never fails to astound entire nation, we can call it its fame or defame. This is current plight of India’s one of the best universities. However, itis not right to call it university as now it has turned into a political arena where arson, violence, and irrelevant protests are maliciously planned, and after riot, the rioters even disguised as old students find shelter inside and the communists shamelessly guard them.

Where educating new generations with a brand new ways should be a first priority, there hatred for a community is emanating unabated, communalizing a faction of violent youngsters brainwashed by leftists against Hinduism. The influence on particular castes that are profusely fed hate and ire against the upper caste which is already economically suffering because of reservations, is intense that can be seen in recent incident took place in JNU. The walls of the campus were splattered with genocidal graffiti against Brahmin and Baniyas by unknown yet well known communist elements, threatening the upper castes to face the blood with slogans like “Brahman & Baniyas leave India, we are coming for you, and there will be blood”.

This call for genocide of Brahmins and Baniyas is infamous desire of left ecosystem, brainwashing and poisoning lower caste students for their own purpose, lauding Bheemism and promoting hate against Hinduism. Consequently, the deracinated lower caste Hindus still continue to feel the ancient exclusivity and fictitious discrimination which they hardly experienced in their lives now, anddeliberately exasperate upper caste with such graffiti for a conflict that is propitious for the left. As communism thrives on violence and chaos.

Brahmins are rancorously targeted, abetted and threatened by the emerging Bheemism fueled by communists and Islamists. Often times, by different ways, Brahmins are vilified for their culture which Bollywood activists want to obliterate, because they know the end of a community is possible only when its culture is destroyed. Here is why basic ways of Hindu marriages are targeted hatefully and attempts to change the rituals are made through advertisements and speeches.

The threatening graffiti in JNU is disclosing the hidden danger for Hindus lurking behind to harm the community under the aegis of Islamist purporting to be so inclusive and amiable with lower caste students. Dr. Ambedkar is now a medium of all the hate splattered on walls, books, and placards in protests. Using his image is sort of like justifying hate, violence, and genocidal slogans in the name of freedom of speech. Which is why all these hateful graffiti in JNU was accompanied by Jai Bheem slogan written on the walls. This hate painted on walls doesn’t bother any liberal and politicians who get unimaginably saddened by a Hindu man urging to make India a Hindu Rastra. Everything becomes so normal that nobody gives any attention to these threats despite seeing how so-called oppressed faction is misusing their rights to humiliate upper castes due to their unbridled hate against them. Even media is silent as if such things are so common in JNU. The journalists who called a rioter Rambhaktreading his facebook profile, are unable to make a comment on this incident despite knowing the reality behind this popular hatred. It’s probably because the hate mongers are their real audience, therefore calling them bheemists is quite difficult for these self claimed unbiased journalists.

Communalism is continually thriving in JNU, enticing all the anti Hindu elements to do such acts oftentimes in order to provoke the Hindus to stand against this. And when Hindus come out and retort fervently, all the communists, journalistscome out to highlight and weave stories of Hindu communalism to blame Hindus for violence that occurs afterwards. This is very common maneuverused by leftists and Islamists thesedays. This opportunistic rapport between lower caste Hindus and Islamists friendly leftists is strengthened by hate they regale each other. Standing behind schedule caste, leftists and Islamists are pushing their agenda withoutbeingvisible. That’s why this is certainly more dangerous situation for Hindus, as the hate against them is routinely intensified in bheemists beingcajoled and misguided by leftists which we can clearly see in JNU and society where Brahmins are being insulted, forced to do inappropriate things by lower caste oppressors withthreats of false SC St cases against them. However these incidents fail to be headlines, may be because Indian constitution is allowing it.

Graffiti culture has always been used to usher a society either to a chaos or a harmony. This JNU incident is utterly alarming for the Indian society which is not being vigilant about these things demanding blood of Brahmins. The universities are currently on the cusp of becoming educational hell filled with demons craving chaos and violence. This is the need of the hour to bring reforms and discipline in these universities where seeds of violence, hate, conspiracy, treason, and communalism are painted.  It is the time to instill fear of law in these elements who are trained to ignite the fire of conflicts between communities on account of their insatiable appetite and unhealthy conceit. So that educational institutions won’t lose their fame, where students can be taught without any disturbance to contribute to the betterment of the nation which is hardly prioritized in left ideology.

Provocative graffiti can inflict damage to the harmony of the society, as well as the institution. Universities should remain universities, eradicating all the threats, instead of being a battle field. For, if Jai Bheem, Allah u Akbar can be written on the walls along with genocidal slogans, then it would be surprising if we witness other religious slogans in the campus, intensifying the environment. Although this type of provocation crafted by communists has only one purpose– conflicts and violence, yet this can’t be a reason to normalize this amount of hate and violence in the universities. University administration must be vary about these incidents and restrain such effrontery of anti Brahmins elements in the premises.