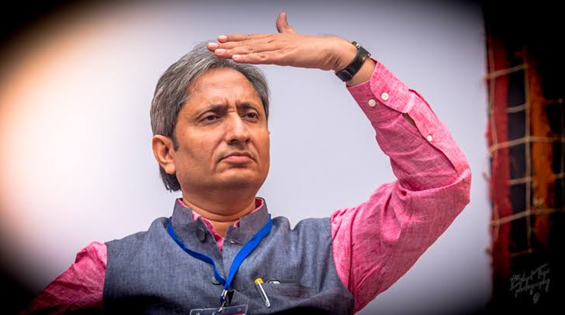 A news channel that used to dominate Indian media and insanely brainwash Indian minds for decades, delighting its masters in the power, is now on the brink of extinction, or say it is losing its identity that thrived under Congress regime. Ndtv has always played a role of a politically important villain in Indian politics which never fetched anything for India, however it yieldeda lot for the Congress party as well as the left ecosystem. Before 2014, Ndtv journalists were like the spokespersons of a few political parties particularly congress, always prepared to show the viewers how excellently Congress party had contributed to the betterment of the nation, brazenly condoning the disastrous conditions in the country such  as corruption, terror, and religious conflicts where Hindus were invariably scorned, vilified and blamed. It was the time when secularism was only to blame Hindus, and cajole Muslims for the vote bank, taking Hindu community for granted until they chose Bjp as the Savior.

India is rapidly changing its old identity through reforms in all fields including media which I believe is the most important. Since 2014, Indian politics took a sudden, unexpected turn when congress was dethroned. It not only shook the pillars of the oldest party of India, but also shocked Indian media that was completely worshipping Congress for relishing parliamentary revelries along with dalliances with Congress leaders. Indian journalists who were too addicted to sycophancyto wake up to face the new dawn of Indian politics, are now purporting to be a model of rectitude and candor which their journalism always lacked. Their audacity to question public anger against the Congress’s profligate tendency and ignorance about the policies, was prevalent, destroying the fourth pillar of the constitution. In order to gladden their masters, journalists even would blame public for being too sulky and despondent, whenever inflation along with other chaoslike Islamic terror and corruption soared up.

Media dominates when the govt wants it to rule the minds of people, therefore until 2014, Ndtv and other friendly media houses never managed to muster the courage to question Congress party about its social, secular, and financialfiascoes, because their tongues were utterly chained, and only praises were embedded in them. Questions were only for the opposition specially Bjp, the mighty opposition back then, was fortifying its saffron rootsfor a new sunup India was curiously waiting for.

Ndtv was flooded with left inclined journalists like Barkha dutt, Ravish Kumar and others, who were politically privileged for their unflinching loyalty towards the ruling party Congress. All kinds of ridiculouslydangerous journalism wasthriving in Indian soil, as a result even national security was breached during war with Pakistan by journalists, terrorists were victimized and immorally sympathized, besides, Hindus were blamed for 26/11 terror attacks as secular journalists were obsessed with emerging Hindutva that instead of questioning the security failures of Congress government, their voice was raised against Hindus and concocted a conspiracy against Hindu community to invent a new terror named Hindu terror, to denigrate Hindus, injecting an indeliblesense of guilt.

Ravish Kumar who is now being painted as a role model for the media rightnow for his decision of resigning from Ndtv which is now on sale as its founders lost shares, has always been an agile political element in the garb of journalist whose tongue never appreciated anything if it didn’t suit his ideology, and never questioned anything that was against his political peers. The journalist who used to advise public not to sulk over petrol, gas and other essentials, who used to laud plausibly formal coy prime minister who was comfortable only with Ndtv, who used to sympathize with islamic terrorist Afzal guru, and was gladdened to be the only reporter present in Parliament premises when terrorists attacked it, is now exaggerating his insecurity of being forced to be mum in Modi era. How ridiculous! Adani buying Ndtv quickly made him so insecure and frustrated that he ended up resigning and claimed that now journalism will be obliterated as if he was the last warrior of unbiased journalism. How ironic!!

He was the first journalist who even attempted so shamelessly to whitewash Kashmiri Hindu genocide on his show and tried to normalize it by not mentioning the Islamic terrorism wholly responsible for this, but feigned sympathy with the persecuted Kashmiri Hindus. This has categorically been a real propensityof Ndtv. Consequently, Kashmiri Hindus never managed to be a headline as the media was under control, and journalists like Ravish Kumar and others were more interested in terrorists than Hindus. That’s why Indian media used to make Terrorist Yasin Malik a headline for days, having dinner with reticent pm ManMohan Singh, instead of showing the plight of fledKashmiri refugees beseeching for justice, sojourning out of their homes in Kashmir snatched by fanatics.

There was a time when Ndtv journalists used to decide which congress leaders should get which ministry, moreoverCongress friendly media houses were even allowed to organize their parties in president house, and journalists would be accompanied with army soldiers while meeting or interviewing congress leaders. Those rosy days have gone now, those who lolled on Congress’s lap for decades, are now concerned about what would happen to Indian media that lauds Modi govt unlike Ndtv. The term Godi media was also invented and named by this prevalent censorious journalist who zealously cherished Congress’s lap for decades until the lap was no more, and the other party came into power and ruined the dreamy journalism he savored for years which even fetched him Magsaysay award. Like usual, attempts to highlight the resignation are being made so that new YouTube journalist like other ex Ndtv journalists could survive on YouTube, since many of them are terribly unemployed, specially the ones who used to get accompanied by soldiers in congress regime. Time has changed, so has politics.

Indian journalism is filthy, it never possessed candor. It only owned bigotry. India has sadly never seen unbiased journalists. All are satisfying their political urges in the garb of journalism, intensifying the emerging ideologies and neglecting real issues. And even those who emphasize important topics, are only concerned for their ideology not people. Which is why now left inclined and congress friendly journalists talk about unemployment which never bothered them in congress time when it was at highest, they highlight crimes against women only in those states where Bjp is in power. Subsequently, any riot in Bengal doesn’t bother these self claimed unbiased journalists, but a thief beaten by people can be a headline decked with unrealistic figments. Thissaddening plight of journalism is explaining why Indians see no credibility in these news channels, as well as these YouTube journalists for their uncontrollable bigotry.