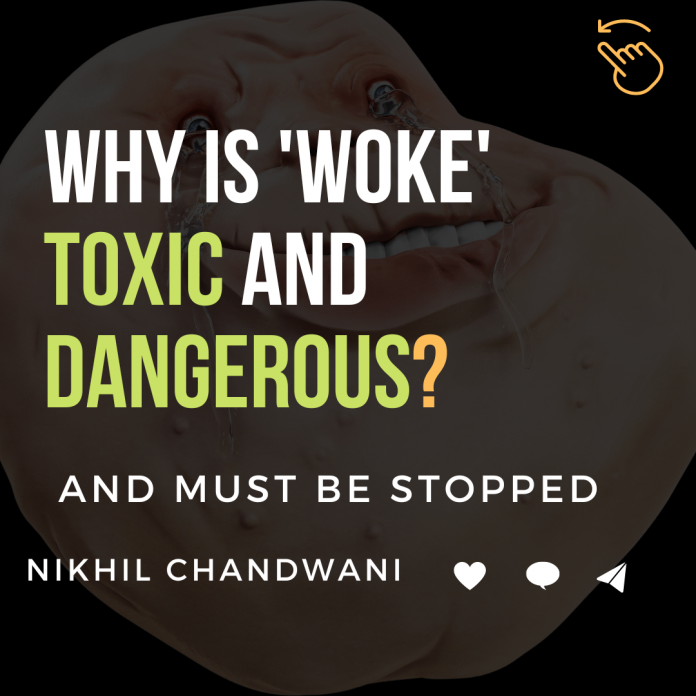 According to modern definitions, woke is an adjective meaning alert to racial prejudice and discrimination.” It came to confine a broader awareness of social inequalities such as animal rights and sexism. It has also been used as shorthand for Western ideas involving social justice and identity politics. It looks like a harmless trait of some empowered individuals in power, but the reality will shock you.

Considering the time I’ve been on the internet, I’ve been exposed to a slew of informational shit. However, there is one topic that is recurrently atop my list of pet peeves: Selective Outrage of so-called alert citizens who are trying to cause destruction in conservative ideas and replace it with something that is impairing support for the problems it is meant to be highlighting. The Woke Activism goes like this – they’ll force you to believe in their selective (almost always a falsified one) cause, even though it is flawed and worthless. They’ll lower your self-esteem combined and develop a pathological preoccupation of hatred towards your country and religion, and then manipulate you to follow their cause.

Woke tried to globally ban the word ‘MOTHER’: Pro-trans organizations told hundreds of public and private employers to say ‘parent who has given birth’ rather than saying mother has given birth. They ensured a universal outrage against the words of mother and father because they felt anyone could become a parent. They did this to create a gender-neutral society because that can stop rapes, according to them. However, the same pro-trans organizations (the woke hypocrisy) are now silent about how two extremists sexually exploited a Hindu boy in Hyderabad in ICFAI, Hyderabad, just because those extremists belonged to a specific community that no organization wants to target.

Hindus have suffered immensely in Kashmir for a thousand years. The current majority in Kashmir are those who caused the destruction, and so the Indian army keeps a close watch to ensure things are not repeated. Rather than sympathizing with the Hindus and motivating them to return to the valley and creating online awareness of our Bharat before Mughal and British invasion, the woke generation is more worried about a blanket ban on fast internet in Kashmir.

They sympathize with the attackers and not the sufferers. The same attackers are killing Hindus in Pakistan, yet I’ve not seen a single woke page or Insta account, or media platform write about it. Whether you’re a millennial, Gen X, or baby boomer (all these are woke terms), you may have been exposed to these online patterns and behaviors. Don’t let this get normal and call them out. If they speak to you, they might engage in guilt-tripping that could jeopardize your confidence; stop them! They’re not just toxic but dangerous.