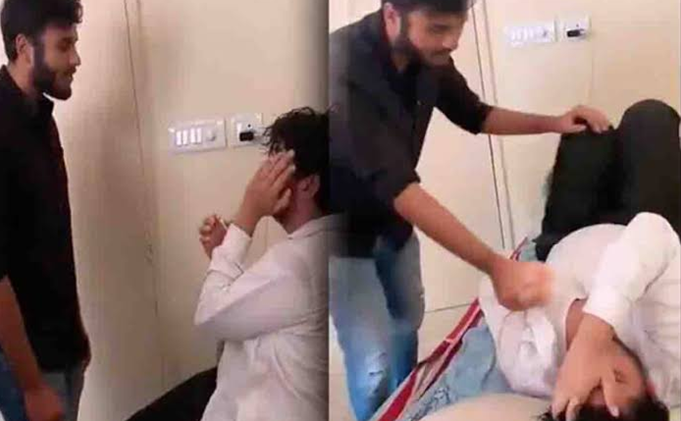 It is an irrefutable fact India is rapidly becoming a hell for the majority. Unlike other countries where minorities are persecuted, tortured, and discriminated against, India is the only country where the majority is routinely traumatized by the Muslim minority. And these incidents don’t even become a headline as it is injurious to the fabricated secularism of India. Unfortunately, this poison initially seen in Kashmir is swiftly spreading across the nation and more gruesome events occur on daily basis, yet hindu phobia is not considered pertinent internationally. Probably because speaking about Muslims committing crimes against other people offends the idea of secularism, even if the crimes by radicals are visible.

Something pertaining to this, has taken place in Hyderabad on November 1, where a Hindu student namedHimank was stripped, beaten and coerced to chant Islamic slogans by Muslim seniors. In the viral video of shameful incident, Muslim men can be seen hurling religious abuses on Himank, threatening him to kill if not comply with their demands of Islamic chanting, twisting his hand mercilessly, and trampled him like they had no fear of the consequences for their actions, as if they were ensured to be safe afterward.

Cowering in terror, Hindu student was pitifully apologizing to these radical Islamists with violent hate for him glinting in their eyes, beseeching for forgiveness as though he committed a crime to be a Hindu in a college where Islamists study or say exhibit their terror to spread their radical ideology coveting to engulf all other ideologies. Islamists disguised as students laughed at Himank’s helplessness and pitiful requests to them, since their hearts were lurking for blood like previous murderers like Aftab and others. They collectively forced Himank to get naked, perhaps due to their prevalent penchant for sodomy, and abused him, belaboring him on his refusal. They wanted to fix his ideology by thrashing him so badly into a coma, and then come out to a new world where Himank would fit into their radical ideology and surrender to them.

All that happened in college, is a hard slap on secularism we are fed regularly by political parties and the proprietors of activism. As per the report, these radicalized factions of students orchestrated violence over a mutual discussion between Himank and one girl in the college who later on vitiated the conversations and shared screenshots with these goons. The conversation is said to be about prophets, therefore any violent reaction from Muslims is quite inevitable.

Since, this type of violence has been reported oftentimes such as the Udaipur murder case, the Nupur Sharma case, etc. Radicalism is too intense to take things legally like Hindus who wait for the court to decide whether religious sentiments are hurt or not. Moreover, like Nupur Sharma, even defending our faith and answering factually can jeopardize one’s life, despite deliberate attempts of provocation made by Islamists. Violence is first reaction we get when Islamists are bothered by a factual rejoinder of Hindus.

This is sheer intolerance regularly performed by Muslims in similar cases whenever educated, moderate Muslims argue and angrily insult other faith, and then get thrashed verbally, and evidently, extremists lurking with sharp daggers come out on the streets and threaten to kill the Hindu, same happened with Nupur Sharma. It is apparently unclear what’s the reason behind this violent incident with Himank, nevertheless, it is not acceptable and tolerable because these things can’t be normalized.

A disagreement in a conversation or debate about any religionis democratically not supposed to inflict violence and threats. India is a secular country, then it is time to teach Muslims to be secular too, and be more tolerant if they are keen to comment on other’s faith as it can’t be healthy if shown by one community. Besides, violence shouldn’t be hidden on the pretext of any fictitious islamophobic talk because if it continues unabated, then eventually every crime committed by radicals against a Hindu would be attributed to a sudden reaction from Muslims and in the end Hindus will be solely blamed for their lynching and murders. Instigation will be blamed not radicalized minds filled with hate.

This case is not like a common conflict between seniors and juniors, neither is it a ragging case. It is plainly a case of hate enticing radicals against Hindus which we have seen in the video how Muslims forcibly embedded Allah-hu- Akbar in Hindu boy’s mouth and grabbed hismouth to chant it, eliciting a sense of dominance in their eyes. The hate in their eyes and voice for Hindus is conspicuous in the way they expressed their ardent desires to beat him into coma and fix his ideology. It transpired that they had a problem with his ideology, as if seeing a Hindu around them is like an allergy to them. This is absolutely the bad impact of radicalism that feels arrogant and grumpy in the presence of any other faith. Influenced, theyunabashedly hankered for killing him, therefore they did everything they possibly could, beating him brutally, making him beg for forgiveness, twisting his hands, slapping him hard, and stifling him with their knees over his neck.

It is categorically an alarming incident worth taking with sheer seriousness by the government as well as Hindu community and moderate, secular Muslims too so that radicalism can’t dig up the place in college environment and thrive like it has grown stealthily in some states and most famous colleges in India.If radicalism starts to exist in educational institutions like detrimental communism, there won’t be any place for education except violence, hypocrisy, and hate that would easily devour the future of India as fast as anti elements crave.

Secularism shouldn’t be present only in books if it truly exists in India. This shouldn’t be utilized just to mock Hinduism in order to gladden Islamists for avoiding any violent reaction from them. Seculars who yell like boars over fake news of Muslim man being forced to chant Hindu slogan, are silent. They might have their definition of outrage, but this is their prevalent hypocrisy. They yell for the minority, but never outage against the Islamists like those Hyderabad students who desire to kill and shame Hindus by forcing Himank to chant Islamic slogans. However, these radicalized platoons of hoodlums must know, any religion can only be embraced willfully, not forcibly, but if this is how they think they can force their faith on others, no doubt why they get easily offended and rush out to kill people who speak about their religion. Furthermore, Govt must be strict and quick to tackle such dangerous hate which can easily disrupt the harmony of the nation and obliterate these symptoms of radicalism promptly with an unbiased attitude.