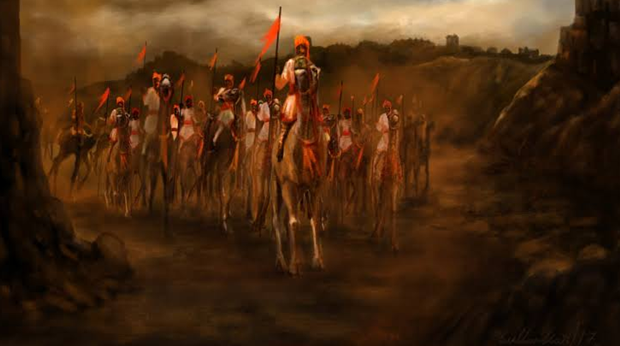 The gigantic fort of Chittoor standing like an immortal sentinel continues to sing the epistles of history of bravery that started with the echoes of Har Har Mahadevand Jai Bhawani, terrifying the enemies outside. The huge walls of the fort are still invisibly debauded with unmatchable gallantry orchestrated by the Rajputani women, their sacrifices pervading entire Rajasthan. It is the only testimony of their Dharma yudhh which they fought against the lecherous Islamic perpetrators who dreamt to devour their beauty, however, Islamic rulers with unbridled lust driven by their unrestrained penchant for Hindu women failed to fulfil their desires, for the Hindu women chose death over being confined into Islamic harem.

They refused to live a life of a slave being sexually tormented routinely. And that’s when two rituals Jauhar and Saka were born when Islamic roots  were deepened in Bharat. They depict distinctly how Hindu kings and queens embodied valor and started a celebration of death under hazardous circumstances when defeat was imminent.But their unconquerable spirit elaborates how they bravely embraced death, and tarnished the victory of Islamic rulers, and immortalized their glory.

Victory and defeat over an empire were so common in India when Hindus kings were ruling their states. Although the bloodbath was as merciless as it used to be in the Islamic era, yet the truces between kings held their own significance as the defeated king’s kids and wives were never tortured or made slaves for the army of the other king. Bharat has also been wildly known for the mercy shown by the kings in the battlefield such as Prithviraj demonstrated his mercy to cruel, wicked Islamic rulers several times, but as soon as Islamic rule was established in India, a litany of Islamic atrocities and debauchery against Hindu kings and their families also came into India from different borders which is why the harem culture thrived vigorously in India as Islamic rulers were driven by hate against Hinduism.

In order to dodge these atrocities, Hindu community started multiple rituals and customs to protect their pride from the evil eyes of Islamic rulers. Veil was also one of them but Indian historians are still engrossed in their reveries and refuse to believe anything else except their conjectures purposely for portraying Hindu customs in a negative way. However, the reality is well known. Hindus under Islamic rule were on the cusp of atrocities, therefore Jauhar and Saka were considered to be the last resort to save their pride in exchange of their lives.

Jauhar was a ritual in which Hindu women immolated themselves in a vast furnace inside the fort when the king’s defeat was imminent and Islamic rulers were agog to gobble their beauty and satisfy their unquenchable lust. In order to protect their modesty and familial pride from being rentby the beasts. Historians could deem it inhumane as it is quite elusive for them to acknowledge the barbarity of Islamic rulers if they caught these rajputani women after defeating and killing their king immorally.

The biggest Jauhar was seen in chittor fort where approximately 16000 women with girls jumped collectively in the pond of fire that engulfed all of them and became a part of Indian history. Their echoes were muffled by historians, some even tried to belittle their sacrifices and bravery by questioning their decision, and created a misogynistic version of this. Jauhar was infact a suicide mission, suicide is said to be a crime now, but it was all that could guarantee the protection from Islamic sexual brutality at that time.

Saka was also a ritual that Rajput performed after the women had committed Jauhar. It epitomizes heroism, unwavering valiance and volition to sacrifice themselves as  the death awaited them on the threshold of inescapabledefeat since they didn’t choose to skedaddle whichwas never a Rajput trait. The men applied the ashes of the women from Jauhar kund, donned the saffron clothes and had a Basil leaf in their mouths. They determined to inflict damage to the enemies as much as they could, as after performing Saka, they embraced upcoming death and then rushed out to massacre the enemies and sacrificed their lives for their pride, with boisterous echoes of Har Har Mahadev that misted over the battle field with clamor of bravery.

These two rituals were clearly a suicide mission, however both can’t be seen inhumane or primitive because Saka also explains how deep the conjugal love was at that time, and it also shows even at that era when women were treated as a link between two empires, a gift for a truce, and just a reward for their heroic actions of kings, the Rajput showed their reverence to the sacrifices of their women, and worn their ashes like a layer of love wrapped in bravery. Their salutations for the women could be found in this ritual.

Saka might be a little bit different from Jauhar but purpose was similar; fight as if death is also a celebration. This attitude of Rajput was unique nobody could ever transcend it so far. The battle field was similar to Jauhar kund for the Armed men wielding their swords fearlessly in front of a giant army ready to torture them if left alive. Nothing even for a second impacted their will power, all that shone in their eyes was the ardent desire to erase the name of their enemies and immortalized their Rajput glory. Echoes became immoral, their sacrifices became indelible. That’s what their gallantry changed in the history, their unconquerable spirits destroyed Islamic sense of victory, and the Jauhar and Saka ended up giving us a privilege to live with the same old pride and glory to flaunt. Sacrifice is always painful, but it was crucial at that time. Otherwise our generations would not have been lucky enough to wear saffron and salute the pride of our Dharma the Rajput died fighting for.