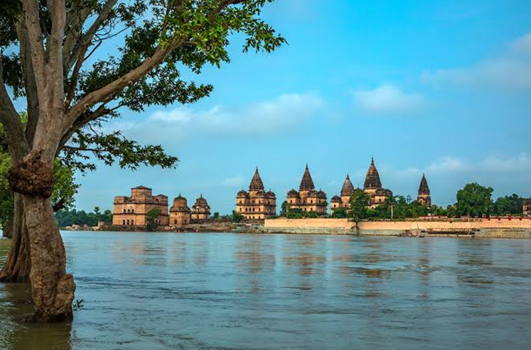 The river Betwa gleams when the sun playfully sneaks out from the walls of the historical cenotaphs of Orchha in the morning, and plunges into the pristine water like an unhooked canoe. The cenotaphs that proudly stand on the brink of the river, silently sing the song of history which is still dangling between their walls and domes. This has categorically been bewitching Indians and foreigners since the advent of Orchha.

Orchha is a beautiful town in Niwari district of Madhya Pradesh, founded by a BundelaHinduRajput king Rudra Pratap Singh in the 16th century. It is truly an architectural marvel in the Bundelkhand region. It’s a place where history is festooned with nature while clinging to the divinity that calmly sits in the temples. The river Betwa that flows on the periphery, caressing the huge old yet unscathed walls of King’s palace, nurtures a wildlife sanctuary in Orchha. The palace was incredibly built, therefore this town is brilliantly decked with natural rapture and Bundela architecture. The sunbathed forts and fortresses all around this place exude unbelievably immaculate vibes which are as soothing to the eyes as the deep slumber.

The King’s palace commonly known as Raja Mahal was elegantly built in the middle of the town that is still standing like an old spry sentinel, restlessly flaunting the grandeur of Royal features. It’s a captivating melange of Mughal and Rajput architectures. It has an impeccable interior with royal architecture, decorated windows, graceful balconies, courtyards, intricate pavilions, and huge murals of Hindu deities. The fort is incredibly alluring with its small, beautifully carved domes and canopies that look like an umbrella standing on the top of the building which makes this fort look like a massive temple. Although, this was solely a residence of the king, yet contains an oodles of temples.

The Maharajah had great relations with the Mughals. That is why their architectures are still unscathed. The kings built a number of buildings in Orchha which is the main reason why it is one of the most visited places in MP. One of the Rajput kings, Vir Singh Deo who was a close friend of Mughal emperor Jahangir, had built a massive fort named Jahangir Mahal for this friendship. This intricate piece of architecture is heavenly and beautiful. A huge pavilion with a slew of canopies standing on decorated pillars and intricately carved windows in the corridors that are amazingly airy, carved its name as one of the most beautiful forts of India.

History sojourns on the weary legs of the forts, accompanying the divinity that sits calmly in front of the Raja Mahal. The Ram Raja temple is surely one of the most beautifully built temples with great architecture and religious importance. It’s a Hindu pilgrimage. This is the only place in India where Bhagwan Shri Ram is joyously worshipped not only as God but also as a king. With a shape of a fort and vast canopies, Ram Raja temple is a tourist spot, and significantly sacred for Hindus. The black idols of Shri Ram, his brother Lakshman, and Sita are exquisitely beautiful. The specialty of this temple is, Shri Ram, just like a king, has a sword in his right hand and a shield in his left hand. Shri Ram is sitting in padmasana, with his left leg crossed over his right thigh. Moreover, a guard of honor is held every day for the king of Orchha who is unequivocally Shri Ram.

On a vast stone pavilion, stands Chaturbhuj Temple which had been built in a way that the big elegantly decorated window of Raja Mahal faces the abode of deities inside it. It is a complex multi-storied building, a blend of the temple, fort, and palace architectural features with tall pinnacles on the top. The construction of this temple was started by Rajput king Madhukar Shah for his wife and completed by his son Vir Singh Deo. This is the place where the idols of Shri Ram, Lakshaman, and Sita were meant to be enshrined, but they refused to move when the Queen mistakenly kept them in the place where now Ram Raja temple is situated. There are umpteen anecdotes about what happened to the queen, and why she couldn’t deify Shri Ram in Chaturbhuj Temple which she had built solely for Shri Ram so that she could see Shri ram first every morning from her bedroom. However, according to Bundelkhandi folklore, in order to shatter her ego, Shri Ram didn’t budge even an inch. And then, the king started to construct Ram Raja temple during Mughal emperor Akbar rule. Chaturbhuj temple is dedicated to Shri Vishnu which is apparent from its name. Chaturbhuj means a man with 4 hands, who is Vishnu!. It’s oneof the most massive temples of India. Albeit, the architecture is very intricate and ensorcelling, yet this is deserted, bleak and bats loiter inside it.

The Cenotaphs of Orchha.

Like the tombs of Muslim intruders who later become emperors, the cenotaphs of Rajput kings were built on the river bank. Fourteen in total, these funeral monuments were built to immortalize the rulers of the Bundelkhand dynasty. The Bundela architecture which is seen in the cenotaphs is undoubtedly a harmonious amalgamation of Mughal and Rajput influences. The cenotaphs were built on raised platforms in a form of tall and square buildings with a piercing domed pavilion and four canopies called Chhatris on each one. These buildings are now dark, rain stained. Yet this place pervades the ambiance with serenity and beauty. The sunset view is quite enchanting and famous here. Sitting on the river bank, watching the sun hide behind these tall cenotaphs is always a beautiful experience that everyone tends to enjoy blithely. The sunlight coruscating through these buildings makes this town more beautiful as tourists are seen to be sitting on the Ghats to capture this fascinating sunset which generally lures all. The sunset looks mesmerizing when the sun seems to plunge into the horizon on the water of river Betwa, surrounded by dense forest. The silhouettes of cenotaphs glistened, floating in the river. The evening bells from the nearby temples enhance the sense of tranquility.

These two pillars stand tall and firmly in the Ram Raja temple premises like two brothers. These pillars are named after Hindu months. As per locals, these pillars embrace each other at a specific time. The faith is so strong amongst pilgrims that they do visit these pillars with unchanged alacrity. These towers are an example of an ancient cooling system. These towers were constructed in a unique way that the upper part of the pillars was perforated so that they can catch the wind and lower part was connected to a water reservoir to keep the towers cool in sultry Bundelkhand summer. These pillars are standing firmly like two untiring sentinels of Orchha, delineating their uniqueness to the historical places that have surrounded Orchha and made it an oasis of history, architecture, serenity, and divinity.