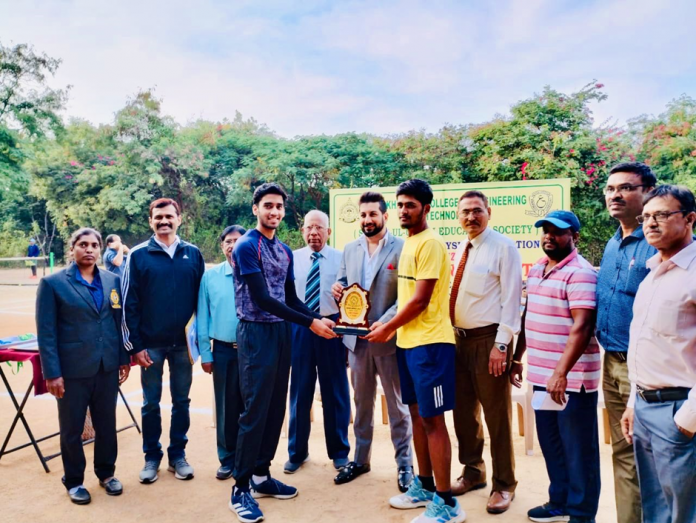 VADLAMANI HANSH KARTIKEYI (Aita Reg No 429835, IPIN No. VAD1473140) was born on 30th April 2004 in Hyderabad and is a top-ranked tennis player in Telangana. He is a Telugu Brahmin who began practicing tennis as a part of his fitness at the age of 14. His father Vadlamani Chandrasekhar is an academician, the author of a book, and the founder of two intermediate colleges in Hyderabad. Additionally, his mother, Vadlamani Aparna, is a homemaker and a professional singer.

At the age of 15, Hansh showed excellent results, and his coaches compelled him to participate in state-ranking tournaments. Gradually, he demonstrated exceptional performance both in the national and international (ITF) tournaments. He played his first ITF, which was a Grade B tournament at Pune Deccan Gymkhana in 2018, wherein he started getting exposure to tennis. He has participated in U16 and U18 tournaments in All India ranking and Nationals. He threw an outstanding performance in both matches. He earned many titles of Winners / Runner Ups in U16 and U18 categories so far.

Presently, Hansh is pursuing BBA in his 1st year at St. Mary’s College, Yousufguda, Hyderabad. He was coached by several reputed and senior professional coaches. He is currently being trained at Lal Bahadur Shastri Stadium, Hyderabad.

He takes his fitness training from GS Naidu of the NFIT academy, who is PTR (Professional Tennis Registry) – fitness, MA, and B.P. Ed. Hansh Kartikeyi has a stellar ranking in the top 10 (All India Ranking) in the U18 group.

He was felicitated by many prominent intellectuals, sports personalities, celebrities, and elite coaches in India for his exemplary achievement in a very less time. Recently, he was awarded a cheque of INR 20,000/- by Sri Gajjala Yoganand Garu, Chairman, and MD of GY foundation and Manjeera group as a token of appreciation for his overall performance in tennis within a fewer time.

Hansh got selected from the south zone representing Osmania University to play an inter-university tennis tournament commencing on Nov 23 in Vellore. This was the proudest moment for him as well as his family, who are elated by all the accomplishments he has made.

The selection for the south zone of Osmania University happened in Hyderabad, where Hansh triumphed effortlessly beating all his co-players from Osmania University and leading his team members to grab a seat in the Nationals tournament.

The peculiarity of Hansh is that his shots are natural like a top-notch professional which is enticing and a treat for sore eyes.

His spellbinding shots are riveting and worth looking which embodies the much-needed passion for tennis.