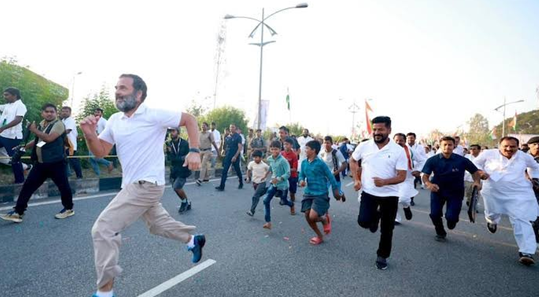 Since 2014, Congress has repeatedly been experiencing a political nadir in the elections as the biggest rival party Bjp is flourishing extensively in all parts of the country. Its rapid growth in clinching power in the states where Congress ruled without any qualm about losing its power, is explicitly an unavoidable obstacle for Congress. For, it is apparent that without power, this party squirms like a fish out of water. This frustration worsened when under the leadership of Rahul Gandhi, Congress continued to fare badly in elections and lost state by state.

Inspired by excellent political rallies organized by the saffron party, Congress also thought to start a Yatra with propaganda to show India is now divided due to Bjp and Congress is ready to fight the hate and spread love and harmony by organizing Bharat Jodo Yatra which is being led by Congress’s scion Rahul Gandhi. It started from Kerala and the party ballyhooed it vigorously as if it was a last frantic attempt to resuscitate Congress and Gandhi’s political career.

Uniting the nation is a good goal, and if someone comes out for doing this vitally important task, he is worth lauding. However, Congress is out with its own political goals through this rally. All the leaders are gallivanting with Rahul Gandhi, trying to show how much they think about poor people in this Yatra. It lacks credibility because those who shouted their desires in to break India in their universities are now participating in this Bharat JodoYatra and urging people to believe them. How funny!

To connect with local people, Congress party is concocting all types of scenes that can be captured very well in media and lionized to make this rally famous. In these attempts, as usual, Congress leaders made fun of themselves, as they fail to utilize their sanity to look more serious about the aim of this rally.

In order to attack the ruling Saffron party over increasing unemployment, and inflation, Rahul Gandhi with his ilk demonstrated their anger against the govt, questioning it about unemployment and inflation with the crowd behind them. However, it seemed like a circus show. It’s because people who were wailing over unemployment and inflation were the ones who wore expensive clothes and had iPhone in their hands. I believe logics are prohibited in congress party. They hardly contemplate logically before starting their farce on the road. Does it have any credibility for people to stand with them and question the govt? No, because public knows these vociferous elements will disappear once they come in power, and nobody will even talk about these issues, let alone solve them. 70 years of Congress in power is a testament of this fact.

Congress sloganeered about uniting communities and accused Bjp of being partial and hateful towards other communities. And also claimed that they would eradicate hate and plant harmony in people, then it will be a country known for secularism. Isn’t it risible? The party that was wholly responsible for India Pakistan partition, the party that broke India for its political ambitions, the party that injected secularism secretly in Indian constitution, is brazenly talking about unity. Irony is dead.

If harmony was Congress’s priority, then no Kashmiri Hindu would have to flee and get killed, if India was so united before 2014, then communal riots would not have happened, if India was so safe under Congress, then there wouldn’t have been any terrorist attack. Truth is, Congress failed miserably in all aspects but questioning this party was not easy for the media too, as most of the channels were addicted to Congress lap and the privileges that were given to them for being loyal journalists. Eventually, those who lost their comfort of Congress’s cozy lap, invented ‘Godi media’. Ironically, nobody has ever been on the political lap more than those journalists who routinely target the ruling party as they lost parliamentary revelries as soon as Bjp triumphed. Congress might have forgotten how hatefully its leaders have mocked and instigated Islamic elements against Hindus, and planned a toolkit to blame Hindus for the sudden surge during covid 19 first wave in 2020 with the help of media. This is enough to show how secular this party is, and how much it works for peace.

Congress Yatra is actually not for farmers who died in its regime, or for unemployed students, it is solely for their politics that went limp in these years. Indian politics revolves around this type of dramas seen on the road. Congress leaders come out only when their careers are at nadir. That’s clearly visible now. All leaders are running like sprinters as if the faster they run with Rahul Gandhi, the sooner they will be ministers. And their heisted money would be saved from the eyes of ED.

Whatever is happening in this political Yatra in those expensive buses for the leaders, seems to be entertaining. Congress’s purpose to make it breaking news, is thwarted by the utter childishness of Rahul Gandhi. In order to reestablish his image as serious leader and down to earth person, he climbed up the bus and sat over it, although the bus was fully empty. Hilarious to see such scenes! The crowd around him shouted as if Raga did something tremendous no politician can ever do. Even congress-friendly media vehemently praised it how brilliantly RaGa is trying to connect with people, nonetheless, this Yatra is being considered nothing less than a circus which is not even entertaining.

On the crutches of its outdated tactics to bluff the public showing their leaders interacting with people, Congress is not going to fetch anything except frustrating disappointment. Bjp has made it too common. Now public interaction between leaders and people has become a basic thing. That era in which the voters would crave to meet and talk with their leaderships, is gone. This is the change that dismantled the edifice of pride of Congress which created depth amongst people. All these dramas of eating at a poor man’s house, holding hand of a girl, touching feet of elders on cameras, showcasing push ups, and running on the highway, are not going to strengthen the party until public sees a ray of hope in Congress, no such political drama will bring it in power again, neither will it connect people with congress and build their trust in its politics again.