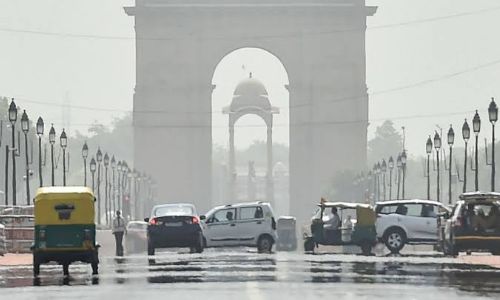 Promises are made in elections wrapped in freebies to lure people, newspapers are immensely filled with the fallacious achievements of the govt, and even international magazines get their palms oiled by the agile politicians for whitewashing their tarnished image. Despite all of these preposterous efforts of the Delhi government, Delhi is still beseeching for breath. Nothing has changed in all these years. The capital of India feels suffocating as pollution grabs its neck every year, coercing people who voted for freebies to beg for fresh air in Delhi.

The national capital is an highly highlighted political arena where all kinds of political maneuvers are planned and performed brilliantly by all of the political parties. Now Delhi has been manacled by a brand-new political ruse of freebies which has unfortunately allowed pollution, drama, and riots to shroud it. That is now costing people their lives, and they can’t ask for breaths as probably Aap govt will remind them of the fact that they haven’t voted for fresh air, development, and harmony, they voted for freebies.

Delhi was suffering due to stubble burning in Punjab and Haryana, as repeatedly asserted by Kejriwal govt. He has always managed to clothe his failures over controlling pollution in Delhi, and brazenly blamed other states, purporting to be helpless, but never attempted to do something about it, whereas his govt squanders crores over advertisement of sewage pipeline, and ballyhoo it vehemently. Irony is dead.

Punjab and Haryana were blamed for years for failing to control stubble burning which causes intense air pollution in Delhi, and creates a health chaos across national capital region. Punjab was responsible for Delhi pollution until Aap came in power there. It’s funny how now Kejriwal is mudslinging Bjp for his own failures. As his ventriloquized govt in Punjab drastically failed to stop stubble burning. Pollution free environment was promised in Delhi during elections, but it was compromised in Punjab. It is because ‘The farmer protests’ was supported by Aap, consequently this party triumphed Punjab, and since then for political power, the govt is complying with the hidden forces that helped it win the state, defeating mighty congress. Therefore, it’s quite difficult for Aap to take action against the farmers, but blaming others is easy as this is how Aam aadmi party was born with this prevalent characteristic.
Tons of stubble is currently burning in Punjab, and this smoke disaster is horribly smothering Delhi, detrimental air pervading entire ncr while Delhi CM and his ilk are sojourning in the states where elections are about to be announced, ballyhooing his Delhi model of abject nonsense, freebies, drama and mudslinging. It is hilarious how shamelessly this party plays with people alluring them with freebies and fallacious achievements that only exist in advertisements. Such as his model of education is the best in the world, however reality cackles at him, showing how his world’s best education minister is now accused of scam and Delhi schools lack buildings, because they are built on papers for advertisement. It is an extraordinary trait of this party— never accept anything even if it is proven.

This party deliberately ignores its responsibility and comes out with its foul mouthed leaders to vilify other govts in order to conceal their debacles. Now Delhi is suffering under Kejriwal. But this time, Punjab isn’t blamed, proving why there can’t be a problem if Aap is there. This political toxicity is a real identity of Aam Aadmi party spreading like a disease everywhere. Delhi is a victim of this politics, but still people of Delhi can’t question as they will be quickly labelled Bjp agents, even if they voted for this faction of bunglers.

What Congress did to Indian politics in decades, Kejriwal did it in a couple of years. He started a govt of lies, advertisements, and drama laden with freebies and fairy tales of Delhi model in which he exhibits his achievements on the newspapers, introducing world’s best education minister, but what the world actually sees, are rioters, and crooks who burnt and looted Delhi and are lovingly sheltered by AAP until they are sentenced. This is how criminals are made heroes in this party, and Kejriwal even demands Bharat Ratna for them. It is undoubtedly risible but it’s a dangerous tactic of normalizing crimes, scams, and riots in the name of politics.

Winning elections is everything, and then development can be seen on newspapers. This is absolute idea of governance for AAP. As a result, instead of alleviating pollution issues in Delhi, be it air pollution or water pollution, Delhi model exacerbates Delhi’s environment since Kejriwal govt is fixated on nonstop advertisement, unrealistically praising his ministers accused of scams, while Delhi is stifled by pollution. River Yamuna flows silently under clouds of foam, showcasing the plight of the capital which never comes on newspapers as media is profusely fondled by this party. Moreover, Yamuna is a significant river for Hindus, and Hindus are not bothered, they are relishing freebies. But yeah, if any monument having a religious identity of other community crumbles, then this party can spend crores to secure its existence for the sake of its vote bank, for not all communities fall for freebies like Hindus.

Delhi can’t breathe, but Punjab is responsible for it. This is what Kejriwal can say and feign helplessness and outstandingly put complete blame on Bjp, as they are familiar with the fact that it’s only Bjp that stands to tackle an issue. Whereas, Kejriwal can only continuously abuse Bjp leaders and then apologize individually, therefore his political image should be highlighted in newspapers, and his failures should not be questioned because questions exasperates him so quickly that he ends up being quarantined for a few weeks until the matter goes limp and everything becomes exciting for him and his world’s best, most educated leaders to politicize matters happening in other states, and playing victim when anything horrible happens in Aap ruling states.

In this game of politics, and slyness, Delhi continues to suffer endlessly. The voters go through medical disaster, while their elected leaders loll in their homes tweeting how bad other party is, prevaricating when unbiased journalists go to Punjab, and show them how Punjab farmers are fearlessly burning stubble and also explaining the benefit of this method that is unimaginably harmful for Delhi.