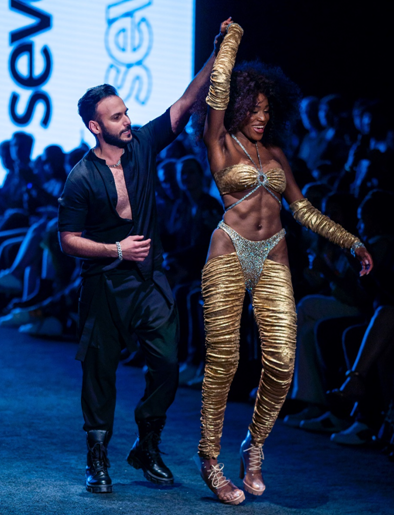 A person needs an artistic and creative personality to operate as a designer. Additionally, people must be skilled at sketching and able to convey their thoughts in sketches. Fashion designers can see concepts well, conceive in three dimensions, and translate those ideas into actual clothing.It is all about pursuing passion and succeeding in the desired profession. Numerous individuals sacrifice their dreams for various reasons. The journey of success starts with small steps. No one becomes a star overnight; it requires patience, strong belief, and restless effort to the right path.

People with strong beliefs do not give up. They end after achieving what they dreamed of. The progress might be slow, but the effort with consistency takes the individuals from nowhere to a big start. The same strategy goes for people aiming to pursue a career in the fashion industry. One such individual is Usama Ishtay – a self-made fashion designer.

Born in Venezuela to a Syrian immigrant family, Ishtay always wanted to create his professional career in the art industry. Plus, he has had a great sense of fashion since his childhood. However, Usama’s parents believed there was no success in such a creative career. So, they persuaded him to study the field most common parents desire. To fulfill his parents’ wish, Usama graduated in Petroleum Engineering in 2010, and later, he received his master’s in Geology in 2012. However, Usama never had any interest in working in his education field. So, he decided to focus on his own startup business.

On his first trip to the United States, Usama met his friend, who used to run a clothing wholesale business. He visited a few stores initially with his friends, which developed his interest in working in the fashion industry. The firm belief and craze for doing something enabled him to start working in this sector. Every big business was once a small startup. And with the same motivation in mind, Usama began selling women’s clothing. The working model was simple. He used to buy merchandise, redesign the pieces and sell unique designs in the market. Success was slow, but the relentless effort made him stand out among the competitors in the industry. Meanwhile, his country’s political and economic situation, Venezuela, was not on good terms. Although he owned three boutiques, he lost everything due to the country’s catastrophic economic and political crisis.

After losing everything, Usama’s hopes were not down. He decided to move to Los Angeles and start everything from the beginning. But this time, he came with a vision and experience. He had made up his mind to build his own clothing business. He kept working, and today, he has his own brand, with the name Usama Ishtay. He has designed dresses for well-known celebrities, earning him a great reputation in the fashion industry.

The simplest definition of fashion is the different clothing and accessories that individuals or groups choose to wear at any particular period. The high-end designer clothes displayed on Parisian, or New York City catwalks may not look the same as the mass-produced sportswear and streetwear in global markets and malls. The design, production, distribution, marketing, retailing, advertising, and promotion of all kinds of clothing (for men, women, and children) are all included in the fashion industry, from the most exclusive and pricey haute couture and designer fashions to regular, everyday clothing like sweatpants and ball gowns. The more general term “fashion industries” is occasionally used to describe a wide range of businesses and services that serve millions of customers worldwide.

Today, Usama has positioned himself as one of the most successful young talents in the fashion industry. He has dressed numerous celebrities, including the television representation and model Tyra Banks, the rapper Eve, singer and composer Carry Underwood, and so on.

Usama Ishtay is a live example for those strugglers who have big dreams to do something special in life. No matter how hard the journey is, people can fulfill their dreams and achieve everything they want with strong determination and relentless effort. Nobody knew Usama a few years back, but today the entire industry admires his legacy. He is a shining star in the fashion industry.