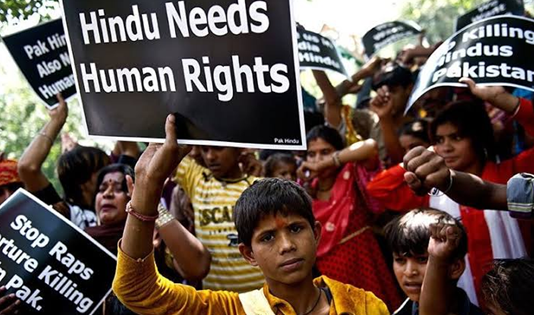 It is unfortunate to see the plight of minorities in Pakistan where horror pervades the air. As it houses terrorists who are unbelievably obsessed with jihad against Kafirs. Whereas, Indian Muslims are facing no religious discrimination like Hindus in Pakistan. It is a curse that Pakistani Hindus are living in an Islamic hell where even air is religiously polluted, and discriminative, where breathing is controlled by the govt, and where even worshipping is not allowed as it offends radical Muslims. Imaging how horrible incidents take place in Pakistan on daily basis against Hindus is enough to be thankful to be able to live in India. This is the helplessness we feel when we see how Hindus are persecuted in Pakistan for their religion and how disdainfully they are routinely snubbed, even the courts giggle with their persecutors.

The hospital doesn’t save lives in Pakistan –

I want you to close your eyes and envisage being in Pakistan for a few minutes. Now think you are debilitated by intense fever, leading you to go to the hospital. It seems normal in any country as the hospital is a place of treatment. But it’s not like this in Pakistan. What will you do if you are ill-treated in a hospital by a cop for being a Hindu? Shocking? It is. You can’t do anything as you are a Hindu in Pakistan. Something more inhumane happened a few days back there, a Hindu man was murdered when he went to hospital for treatment. A cop on duty deliberately got into an altercation with that sick man, and mercilessly thrashed him, belaboring, and chased him. This is what happens in Pakistan. He was stripped, and beaten up so brutally that he had to run naked on road in a bid to hide himself in a drain where his body was later discovered.

This is quite provocative for the Hindu community in Pakistan, however, the courts are used to seeing these things daily so they remain unbothered which is why the accused cop wasn’t arrested while Hindus are still protesting against this planned torture, but their screams are not heard there. Their screams are muffled by discrimination residing in the courts chained to sharia law. All they can do, is mourn until something more painful happens to the new one.

Unlike love jihad in India, Pakistan has become a hell of sexual maneuvers against Hindus.As debauchery was entrenched since Islamic rule. Now as Pakistan is an Islamic country, Islamists possess absolute freedom to fulfill their unhealthy sexual penchant for Hindu girls. Therefore, newspaper and international headlines are routinely brimming with news of gruesome rapes, abduction, force conversion and interfaith marriages between old Muslim men and minor Hindu girls. Recently a 15years old girl was abducted, held captive for days, raped, converted and married to a Muslim man. This incident sparked outrage all over the world specially in India. Consequently, to hide their face, a Pakistani court has ordered for an investigation after a huge protest in Sindh province.

The video of the girl sobbing after getting in contact with the family went viral. Any sane person can guess her age by looking at her physical appearance, however, Islamic court of Pakistan is too blind to see it, so it ordered to do a physical test and investigate the alleged conversion. Later on, the horror won. As the court declared that the girl willingly converted to Islam and married the man. Despite knowing the reality of how she was kidnapped, raped and converted, the court made this frivolous statement. However, that’s what makes Pakistan an Islamic hell for minorities. Where Hindu girls are devoured by radical debauchers, where Christian teacher is beheaded for false case of blasphemy because her student saw her insulting Islam in his dream. How insane!

Here we can only guess how helpless Hindu parents would feel when their daughters are forcibly snatched away from them by Islamists and eaten up sexually. Moreover, the courts allow this sexual terror against Hindus. This helplessness oozes out from their teary eyes and screams when they beseech for justice but injustice and atrocities are all they are forced to experience.

Temples are used as toilets –

After all the relentless forced conversion and gang raped of Hindu girls and women, the religious affront is a more despicable crime repeatedly committed in Pakistan which is fully enjoyed by Islamists sitting in the courts as well. Furthermore, this Islamic Pakistan has the audacity to teach India how to treat the minorities, I don’t know what Pak Pm wanted to advise India because India houses millions of mosques that stand tall even if terror activities are often reported, however in Pakistan, temples are dismantled, idols decapitated, and turned into toilets as this act of violence gladdens the sense of Islam possessed by Muslims in Pakistan.

A temple dedicated to Varun dev and Bhagwan shiv has been plundered and attacked by Islamists, destroying its glorious history of 1000 years, and damaging its architecture and carvings for their Islamic satisfaction. It is now being used as a toilet for tourists, may be this was inspired by their Chinese friends who turned a huge mosque into a public toilet. This is the religious humiliation Hindus have to bear in Pakistan where their faith is belittled, their temples are ruined, and their religious freedom is incarcerated on daily basis. Nonetheless, their helplessness remains the same in all cases.

Kafir Kot, a massive premises consisting of ruins of 5 temples and a large fort protecting it in ancient time is a living example of Islamic barbarity for the world to see and think about. This temple is lost in ruins now. In many videos on YouTube, we can see how Islamists in white kurta pajamas hurling religious cuss against Hindus while standing over the ruins. In history, this temple held an unfading significance in Hindu community but now faces humiliation. Even it is named Kafir kot for insulting Hindus. The huge stones are begging for their glory which Islamists have snatched from it, but Hindus can’t do anything for their faith as they are hardly capable of protecting their existence in Pakistan. Mourning is the only fundamental right they have been given in this land of terror, horror and torture.