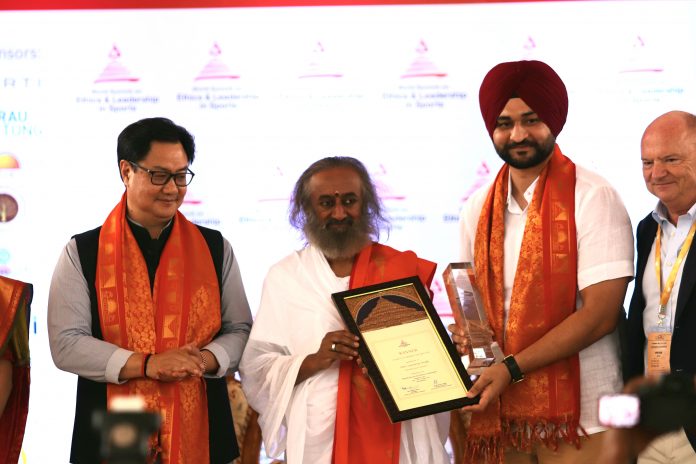 13 October 2022, Bengaluru: To facilitate a deeper and constructive dialogue among stakeholder on the matters of preserving ethics in sports, corporate governance and the role of sports in connecting humanity, The Art of Living along with World Forum for Ethics in Business organized the 6th World Summit on Ethics and Leadership in Sports on 13-14th October, an event that was also livestreamed and viewed by thousands online.

The dignitaries present included Gurudev Sri Sri Ravi Shankar, Hon. Mr. Kiren Rijiju, Minister of Law and Justice, Government of India, Mr. Pullela Gopichand, Chief National Coach, national badminton team, Narain Karthikeyan, India’s first Formula One Driver, Ms. Savita Punia, Captain of the Indian Women’s National Hockey Team, Shri Sandeep Singh, Hon. Sports Minister of Haryana, Former Captain of the Indian Hockey Team, PR Sreejesh, Goalkeeper of the Indian National Hockey Team, India, Pankaj Advani, 25-time International Billiard and Snooker world champion, Mr. Yashpal Solanki, High Performance Director, Sports Authority of India, Kalyan Chaubey, President of All India Football Federation and a former Professional Football Player, and Mr. Sudhanshu Mittal, Vice President, Indian Olympic Association.
“Sports can be that one thing that can bring people together. But today sport is played like a war and wars are waged like a sport,” said Gurudev Sri Sri Ravi Shankar. “Players should play with a sense of responsibility and have a sense of sacredness towards their viewers and fans. Ethic is simply not doing what one does not want done to them and this awareness is very important,” he adds.

Shri Kiren Rijiju, Minister of Law and Justice, Government of India, and former Sports Minister with the Government of India shared his views on the need to encourage a culture of sports in India, creating career opportunities within the sports ecosystem for players to take up roles as coaches, managers, sporting businesses and for a diverse viewership in sports outside of cricket.
“India has a rich history and tradition of sports that goes back to ancient times. But over the years, the evolution of the society didn’t bring sports culture in the country to the extent we would desire,” he shared “sports isn’t only about winning and losing, it is more about participation and engage the self.”
“Loving your favorite sportspersons is good, having an attachment to the game is critical. Let us compete in games with sportsman spirit instead of fighting with bullets.”*
Shri Sandeep Singh who was once hit by a stray bullet and subsequently fought back to lead the Indian hockey team shared, “Sports is not just about playing a game. It brings honor to the country by becoming a medium for national anthem to be played at international forums when a player wins a game. In sports you can win in the international arena, without violence.”

Themed ‘United for Ethics in Sports’, the coveted group of speakers, policy makers, administrators, and accomplished sportspersons deliberated on promotion of ethics and integrity in sports, the lessons for businesses and politics to draw from the world of sports, showcase successful CSR activities in the field of sports, assess and address current challenges in sports ethics. The summit sought to draw a roadmap to use fair and clean sport as a tool to unite people in a post-pandemic world riddled by conflict, economic crisis and mental health issues. The matter of ethics in sporting events had recently been the center of discussion, especially with the upcoming controversial FIFA World Cup.

The summit not only focused on bringing attention to the critical challenges related to sports governance such as corruption, doping and human rights, but also recognized the good that sports stands for by celebrating positive role models.
“Ethics, leadership in sports is not discussed often enough,” said 25-time billiards and snooker world champion Pankaj Advani, “I appeal FIR is also known as – fairplay, integrity, and respect in the world of sport. This is to believe that we actually can play sport with fairness, integrity and respect not only for our sport but for our opponents, audience and rules.”

The Summit proceedings also featured the announcement of the Ethics in Sports Award 2022, a prize that recognizes outstanding individuals and organizations that have demonstrated the importance of human values and ethics in life and in the sports arena.
The winners this year included:

The 6th World Summit on Ethics & Leadership in Sports is organized by the World Forum for Ethics in Business (WFEB), a Brussels-based global NGO with special consultative status at the United Nations’ ECOSOC, in partnership with Dr. Rau Foundation, and is a continuation of WFEB’s dedicated Ethics in Sports conference series. Earlier summits were held in collaboration with institutions such as FIFA, FC Union Berlin, Anti-Doping Norway and FairSport.