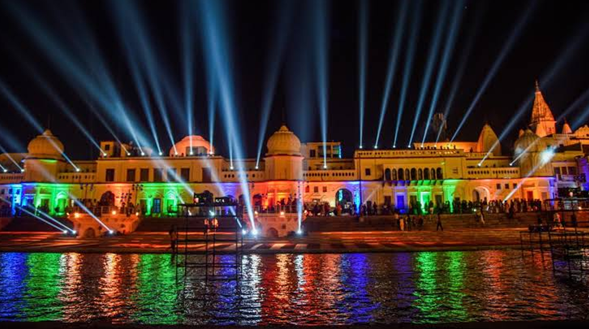 It is unequivocally wonderful to be able to witness the divine moment on Choti Diwali when Ayodhya divinely scintillates with millions of Diyas, amazingly imitating the land of gold. However, this sacred luster of Ayodhya remained captive for decades as political leadership was allergic to this place. It was bleak even on Diwali for decades, but then political reform happened in 2017 when Uttar Pradesh dethroned accidental Hindus, and chose to give power to an unapologetic, proud, intrepid leader Yogi AdityNath who started a new festival of lights to enliven the blurred glory of Ayodhya by organizing a huge Dipotsav on Saryu Ghat which quickly became a center of attraction on Diwali as the up govt made it popular. Dipotsav isn’t limited to Diyas and the crowd. It is more about to replenishing all Hindus with an unfading sense of pride and reverence for their history, and Dharma.

All of it started with one effort of Yogi AdityNath, and now this year, even the Prime Minister of India visited Ayodhya and celebrated this festival of light in this sacred land of Shri Ram. Although it is a proud moment for us, yet it is strange to realize how politicians avoided to visit Ayodhya and Shri Ram for their politics until Bjp came to into power and changed the entire political attitude towards Ayodhya.

Ayodhya is gleaming extraordinarily nowadays. Efforts of Yogi govt are changing everything and beautifying this land with infrastructure, development and creating employment and tourism by organizing such a great event that is watched, attended and waited for by millions of people across the nation. Dipotsav is not only bringing tourism and devotees back to Ayodhya that was ignored for decades, but also providing recognition to artists living in this awadh region. This year Ayodhya set new record of lighting up 1.5 million diyas in the event, and becoming more prevalent in this era. It is an extraordinary feeling to attend Dipotsav as Ayodhya shines beautifully wrapped in the lights of Diyas and drenched in laser lights while the devotees along with political leaders dance and savorthis enchanting beauty. The curiosity in Hindus and other groups for Dipotsav was planted by yogi jiseven years ago which we can notice in this event. Millions of tourists visited Ayodhya for witnessing its religious significance. Of which, the construction of Ram Mandir stands foremost.

This event is a celebration of Dharma and the glorification of Shri Ram. We must not forget how Ayodhya was chained to political ignorance. It lacked development, it lacked facilities. Moreover, even its identity was blurred under an Islamic name of the district. All of this happened because of Ram Mandir, as political parties were too profligate for being in power to talk about it, because their vote bank was allergic to Hinduism. Their Hindu identity was only for fooling Hindu community. That’s why Ram bhakts were shot dead when they fought for their Dharma.

Ayodhya, a sacred land for Hindus waited for centuries for its lost glory, while Indian govt was busy providing free trip to Mecca in order to seem secular and gladden minority community. However, Ayodhya failed to draw their attraction until Bjp came into power. Now, it feels absolutely surreal how Hindu sacred places are being redeveloped, embellished, and regaining their significance under new leadership. India is currently changing its old attire of political discrimination and donning a cultural attire for equality after bigots lost the throne of power.

Dipotsav is definitelya beautiful dawn of change in Ayodhya. So, it also attracted anti Hindu elements hidden in the garb of secularism and liberalism who even questioned this celebration, concocting stories of poverty behind Dipotsav with pictures of people collecting oil from diyas clicked as planned in order to target saffron party and accused Bjp of focusing on Hindutva rather than poverty and employment.

This fraction of frustrated liberals are uncontrollably obsessed with Hindu festivals for demonstrating their unrequired activism. Everything offends them. A Hindu worshiping Mahadev with milk reminds them of poor people, while they celebrate their birthdays by playing with cakes as if poverty is gone from India. They are bothered when Hindus celebrate Dipotsav, spending their own money and time without begging for fund like them. Therefore, liberalism is being treated like a disease in India now after it is badly exposed for being full of bigotry and hate against the majority. It is fascinating to see how Hindus have abandoned this sense of secularism of being ashamedto celebrate their faith. Consequently, these liberals and pseudo secular lolling on the lap of other political parties drastically failed to tarnish the event of Dipotsav.

If you truly want to know what Ayodhya means to Hindus, we must communicate with our elders, and attempt to fathom the reverence for Ayodhya they hold within themselves. In North India, old people revere Ayodhya so much that they call it ‘Ayodhya ji’. I have felt this when I first heard my grandfather saying it and I was captivated and realized how much it matters to Hindus. As this land is about Shri Ram, Dharma and existence. It is divine brimming with splendid history and sacrifices as once it was drenched in blood of Ram bhakts. Their sacrifices glitter in those diyas we light up every year on Diwali, and we must be thankful to them for giving us privilege to celebrate Diwali with absolute freedom and pride which remained a dream for many generations.

Ayodhya is acquiring its significance and demanding us to roar louder ‘Jail Shri Ram’ which was almost banned in India as secularism was offended. Now everything is changed, and certainly this change is beautiful and divine.