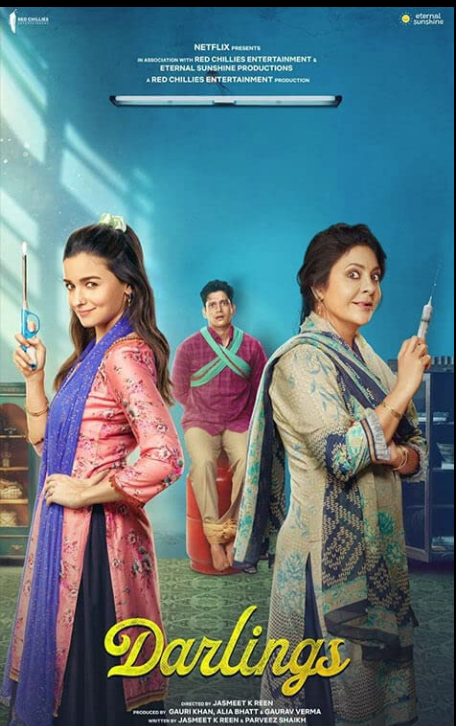 Alia Bhatt, Shefali Shah, and Vijay Verma all shine in their roles, but the three actors’ inherent elegance, at times, overshadows the everyday characters they portray.

Darlings, dismantling the crutches of patriarchy, is a quirky social thriller that almost becomes a well-done public service film on domestic violence. The good news is that the change is mentioned by accident before the end credits.

With an activist’s eye, the film encourages women to fight back against their abusers rather than try to negotiate with the scorpion, a term used to describe their abusive husbands in the film.

It is Darling’s opinion that there are no grey areas when it comes to domestic violence. An abusive husband can’t fall into the safety net of social conditioning and unhealthy eating habits. When he thinks about the “weaker sex” making him angry, the creature’s sense of entitlement comes out.

The story takes place in Mumbai’s Byculla district and introduces us to Badru (Alia Bhatt) and Hamza (Vijay Verma). After three years of marriage, they appear to be a happy couple, but Hamza seems to believe that violence is an inevitable part of the daily life of a man and a woman living together. He hits her, she cries, he apologises, and she thinks it’s because of the alcohol in his system rather than the vacuum in his brain. In the same way that the beautician lives a floor below the couple, we see this toxic pattern all around us but choose to ignore it.

Badru hopes that if he quits drinking, her husband will change for the better. When his rage becomes out of control, she and her mother take action, however clumsily.

However, Hamza, an Indian Railways ticket-collector, maintains his composure despite being forced to perform menial tasks by his superiors. His unfulfilled soul may have brought him home and turned him into a beast.

Finally, Badru and her single mother, Shamsu (Shefali Shah), decide to turn the tables on Hamza by adopting an eye for an eye approach to dealing with him. Her daughter, Shamsu, is a talented cook, but Shamsu’s ingredients are a little too hot for some people. She uses Zulfi (Roshan Mathew), a writer who makes a living selling stolen goods, as one of her admirers, and she uses him to her advantage.

The writers, eager to live up to the offbeat label, try a few tricks to keep the audience entertained after drawing us into the realistic narrative. However, in a film that shifts to a more serious tone in the second half, the comedic twists fall flat. Writing about talaq and khula doesn’t occur to writers who seem eager to get their hands dirty. The central twist appears to have been written first, and then the rest of the screenplay was reworked to make it look more polished.

Vishal Bhardwaj’s music and Gulzar’s lyrics are among the many highlights, but the film’s overall impact is mediocre at best. These days, even thrillers have become predictable due to the excessive amount of information that trailers provide. It has the feel of a short film that has been stretched because of its big message and talented actors.

I would give this movie 3 star for the hard working performances of the the actores. This is Alia at her most agile, Shefali at her most erratic, and Vijay Verma at his most commanding. Despite their impeccable command of the English language and the clarity with which they deliver their lines, the three actors eventually come off as too perfect to belong in the fictional world they inhabit. Dissonance may be the result of a divergent point of view on the part of the director. Despite the fact that it deals with a difficult subject, the film’s execution is stilted and stage-managed.