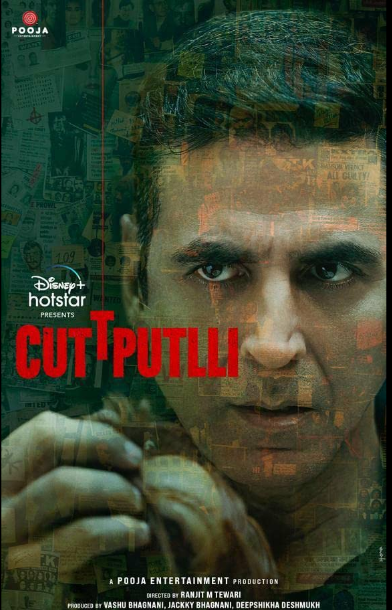 The film “Ratsasan,” which was originally directed by Vishnu Vishal and remade in Hindi, comes across as a generic thriller that is unable to generate any sort of emotional connection with the characters.

The Hindi film industry is currently experiencing a deluge of thrillers, remakes, and Akshay Kumar films during this year’s monsoon season. This week we have a thriller that is a remake of a Tamil hit, and it stars Akshay Kumar in his third film in the last three months. This is a three-in-one situation for us this week. Overkill, anyone?

Cuttputlli is an air-popped thriller that feels like one of those episodes of C.I.D. that keeps you interested without ever aiming to be outstanding. The film aspires to be described as a slow-burn, but in reality, it is more of a quick-burn. It’s the kind of movie where the police officer doesn’t notice the glaring flaw until the hero points it out to him. The film does not contain any editing gimmicks or sounds that are unsettling; the only thing that saves it is that it does not make any obvious attempt to bring us to the edge of our seats.

It follows the plot of the Tamil film Ratsasan (2018), which tells the story of a serial killer who preys on teenaged schoolgirls in the picturesque town of Kasauli in Himachal Pradesh and leaves the mutilated faces of Cinderella dolls as his signature. The film stays true to the source material. Arjan Sethi (Akshay Kumar), a sub inspector who used to have dreams of becoming a filmmaker and specializes in telling the stories of serial killers, is on the hunt for him.

After being rejected by the producers, Arjan takes the advice of his brother-in-law, Narinder (Chandrachur Singh), and becomes a member of the police force. He then applies his knowledge of psychopaths to the investigation to solve the crime. At first, his overbearing SHO, Parmar (Sargun Mehta), mocks Arjan’s methods, but as the number of murders increases, it becomes clear that Arjan is the most likely person to solve the mystery.

By the end of the first half, the focus of suspicion shifts to a sexually predatory educator. However, with only an hour remaining, we have the distinct impression that director Ranjit Tewari wants us to negotiate with the red herrings that are in the hills. On the other hand, the journey in between the turns isn’t nearly as compelling as it should be, and the climax doesn’t live up to expectations, so you end up feeling exhausted. In a narrative that is saturated with so much melancholy, there is only one sequence that makes us choke up. Most of it reads like a crime story that could have been published in a newspaper; all the pertinent information is presented, but there is very little room for interpretation. After the initial spark, the relationship between Arjan and Divya, a teacher played by Rakul Preet Singh, goes in a straight line.

The fact that Akshay does not have to engage in unbelievable stunts during the action sequences is a positive aspect that helps Arjan remain an approachable character. There are times when the actor’s natural simplicity comes through, giving the audience a moment to catch their breath.

However, casting Akshay in a suspense-thriller has its limitations because there is no amount of airbrushing that can turn the star into a 36-year-old, and his image of invincibility gets in the way of any iota of suspense that the filmmakers try to generate. However, casting Akshay in a suspense-thriller has its benefits. When Vishnu Vishal starred in Ratsasan, he was not yet a well-known actor. As a result, the narrative gained momentum when he demonstrated that he was superior to his more experienced peers. He may not be a one-man army in this particular outing, but it is still an Akshay Kumar show all the way through.

This scene does not contain any such emotion. The star should be praised for trying out different versions of the same model, but he plays them with the intensity of a well-oiled machine, which is less exciting than it is efficient.

I would give this movie 2 star for being sluggish and not keep the audience bounded till the end. Once again, the underrated Chandrachur shines brightest in a supporting role. Sargun is cast in an interesting role, but her performance as the police officer who leads a team comes off as a little too self-aware. A little more depth to her character would have been helpful in this situation. The talented Rakul Preet Singh appears to be making an investment for the future by taking on supporting roles alongside big stars. Her performances are very much like this generic thriller, that lacks an authorial signature because there is almost no character arc in any of her roles.