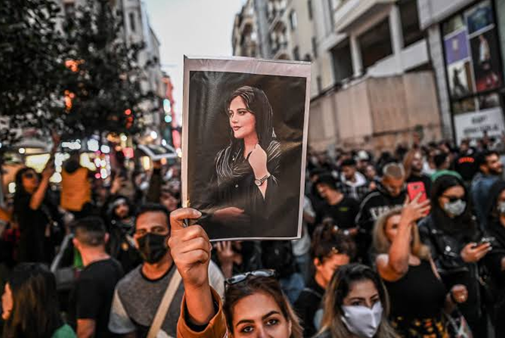 Violent protest erupted in the wake of death of 22 years old Kurdish girl in the Kurdish corners of Iran. This dastardly incident flabbergasted the world, disclosing the plight of women in Islamic countries where their freedom is incarcerated. So, now dictators sitting on the chairs are even deciding what and how women must dress. This girl named Mahsa amini was brutally thrashed by morality police of Iran for infringing the hijab rules in front of her brother which reportedly caused her death. The rule for women in this Islamic country is too strict to let even tresses be visible on the face.

In country where feminists get instantly offended and abusive by a personal statement of a politician about rugged jeans, they are feigning deafness and dumbness. It’s because after seeing what atrocity looks like in Iran, they must have realized how lucky they are to be born in a democratic country, where the government doesn’t decide what women must wear, where unlike Islamic countries, protesters aren’t gunned down for defying the rules of the state while expressing their wrath against injustice.

Looking at this incident, all of us can feel how democracy tastes. Even the feminists who jump on roads naked to protest against any nonsense in a democratic country, are flummoxed that they are hiding inside the hijabs which Iranian women are burning, despite knowing the fact that this can snatch their breaths and land them in the same fate like Mahsa amini as the Islamic countries are ruled by the insanity that sees derisively at women as a creature only for vaginal pleasure. It’s commendable. These women ignited a fire of revolution of sheer resistance against the Islamic mentality that births insane, wicked minds filled with religious and misogynistic filth. Their screams while getting shot by Iranian forces, echoed across the world, waking all of us to speak for them, their rights and their existence that is easily crushed, blown and shot in these countries known for terror and horror.

Their fight against this suffocating religious confinement has started. Albeit, it has demanded them to suffer unimaginably for decades that emboldened their defiance the world is witnessing now. The women are publically burning their headscarves, vexing the radical demons in the country, chopping off their hair to insinuate the message of Mahsa amini that if women’s hair can get them killed, then they are not supposed to grow it. However, the disturbing silence from international and especially Indian feminists is quite difficult to ignore at this hour. But it’s apparently expected from this faction of clamoring chatterboxes who were seen demanding the right to wear hijab in schools in India. This is a seriously detrimental demeanor of Indian feminists who always choose to accept what the world fights to abandon.

At this juncture, despite all the progressive renaissance across the world, we can’t explicitly explain the condition of democracy in Islamic countries where women’s rights seem to be bewildering like water of a mirage in the scorching desert. Imagining any democratic protest in these countries is unfortunately difficult. All the women are being tortured by the radical police forces, squelching their ire, and dissenting voices that quickly offended their Islamic conceit. Consequently, Iranian forces have gunned down 80 protesters so far for violating the hijab rules.

Everything happening to these women is instigating all people except hypocrite feminists of India currently caged in burqa, tethered to their Islamic masters. The world is standing in solidarity with Mahsa against islamic propensity that throttled her, whereas Indian feminists specially Islamic –left influenced ones, shoved their heads in sand, brazenly pretending to be ostriches, widely known for their incurable itching of pretesting. This demeanor shows how pernicious this type of feminism is, that stands for radicals who wanted to confine young girls in hijabs in schools, purporting as if this is what freedom looks like, in sooth it’s the manacles Iranians want to break. These wicked feminists didn’t speak as loudly as they did to allow hijabs in colleges, propelled by their radical masters, exposing their ideology based on hypocrisy outright.

I opine that all the voices raising high in Iran and other parts of the world won’t be tamed easily. Moreover, the silence of these dimwitsdressed as feminists can’t muffle the voice of tormented Iranian women, however it empowers the radical forces to suppress this protest. That’s what I believe is simply jeopardizing all of us. As we know what is happening there at this moment, can happen in all the countries because the ancient Islamic mentality against women is stealthily thriving in all the corners of democracies with a purpose to entrench Islam everywhere. This fact is not unknown to feminists too, but it is deliberately avoided because they know their activism that fetches them good income, can’t survive if the radical force notices it. For, they are familiar with the truth, the moment their voice goes against them, their breaths would be immediately snatched.

Envisaging a life of a woman living in such a horrifying environment created by radicals can transfix anyone living in a democratic country where they have fundamental rights to do anything, wear and go. It scares us to the core to see this Islamic atmosphere that instantly kills women just because their hair is visible. This is sufficient for us to stand against this, and embolden these dissenting voices of Iranian women, and all the other people standing in support of them. This is seriously important to raise our voice, yell at this sickening mentality that is, unfortunately, existing even at this time when modernity is edifying us morally, socially and most importantly, mentally which we believe is the need of time!

We must not flinch on the pretext that this is not currently with us, so why worry? This misogynistic terror is everywhere, all it is waiting for to manifest is a flame of Islamic rule. Therefore, obliterating this current terror against Muslim women, is categorically crucial. If being a follower of Islam, they are being mercilessly beheaded for hijabs, what would happen to Hindus and other religious people, is patently unimaginable and terribly heart-wrenching!