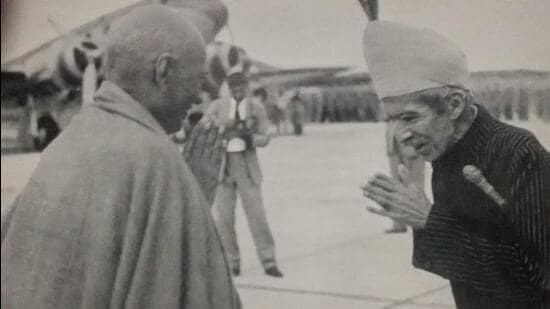 Today Sardar Patel liberated Hyderabad and helped India regain the land lost a few months earlier due to partition. It was also the day when Nizam had his tails between his legs begging India for mercy.

Mir Osman Ali Khan, the seventh and final Nizam of Hyderabad, was a disaster to the Hindu community. Managing one of the biggest provinces in the pre-independence era, he was loved by the British. He gave expensive gifts and considered himself the loyal servant of the Queen. Nizams and their allies, the Salar Jung family, sided with the British during the Sepoy rebellion. Nizam was the wealthiest man on Earth, but the people in his empire were the poorest.

In fact, they are so poor that even today – the districts of Gulbarga, Bijapur and many parts of Telangana, which Nizam ruled in the past, are still staggering under poverty. Nizam abused them through all the ways possible. He charged his citizens heavily and seized all the gold, diamonds and wealth. His stooges were Zamindars and Jagirdars, who were dictators and directed the barbaric feudal system. They enslaved people, heavily taxed peasants, farmers, artisans, businessmen and gave that loot to the Nizam.

hNizam built some really elegant forts in Old Hyderabad. He developed the best castles for himself. He was also featured on Times Magazine as the most valuable man on earth. But all that came with ‘the price’ and the poor had to sadly bear the same. When Nizam realized that India will gain independence and the British will go, he got worried about his Kingdom in the Hindu majority India. He got insecure, paranoid and that destabilized him.

Nizam and his sidekick Qasim Rizvi believed that since Nizams had been ruling for 200 years, Hindus were captives and were only fit to be controlled by the other community. That’s why they unleashed a reign of horror and genocide to keep Hindus under check in the Nizam area. Rizvi organized mercenaries under the name Razakar. People from the minority community were invited by Nizam from all over India to change demographics.

Abruptly, millions of people from the community who wanted to go to Pakistan, but couldn’t go, came to Hyderabad, which was supposed to become part of Pak or an independent state. Hindus were terrorized to abandon their farms and homes. Hindus also tried to establish themselves in Hindu Fauz. But local Fauz containing few Hindus without guns, were no match for lakhs of Razakar with arms. Razakars used to raid villages.

Sardar Patel invited Kasim Razvi to work out an achievable & reasonable solution. Razvi was ruthless & arrogant throughout his meeting with Sardar. He wanted nothing less than an independent nation for Hyderabad. In the first week of September 1948, Patel called for a high-level meeting with the Indian Army to explore ways to march troops into Hyderabad and take control as a form of “police action”.

In the early hours of 13th September 1948, under the code-name “Operation Polo”, Indian Army under Major General Chaudhuri started marching into Hyderabad. It was a two-pronged advance, with the main force along the Solapur-Hyderabad road (186 miles), and a shorter diversion along the Bezwada-Hyderabad road (160 miles). With “state of the art” military equipment (of the 1940s), the Indian Army was ages ahead of Hyderabad Army, and the Razakars, who were just guerrilla militants, started falling like a pack of cards.

In 3 days, Nizam resigned and accepted the Indian union. On 18th September 1948, the formal surrender ceremony was held at 4 pm in which the Hyderabad Army, led by Major General El-Edroos, surrendered to General Chaudhari leading the Indian Army. Razakars surrendered and Nizam’s Hyderabad became part of India and Hindus were saved. It was Sardar who could strengthen India and took on 500 princely states even with Nehru as PM.

If he hadn’t united India or left it to Nehru, we would be a collection of banana republics fighting against each other in a continuous civil war like in the Gulf or Africa. Today, when Indians take pride in Hyderabad as one of their foremost cities – a center of learning, science and IT – they should do well to remember who got it for them and how.

We need to aim for higher co-operation and unity among all the states that the Sardar fought so hard to blend.