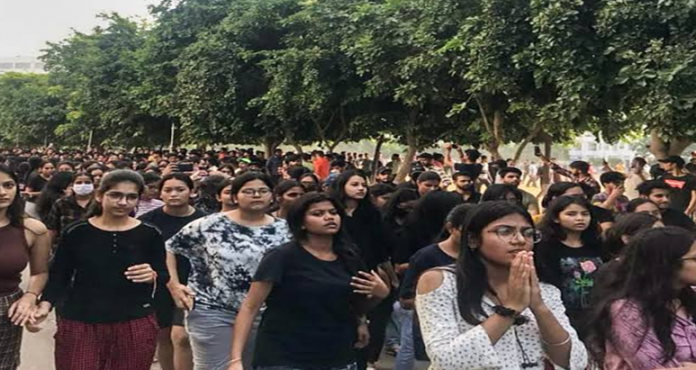 The news coming from Chandigarh university startled entire country, where students of its hostel protested against the inappropriate behavior of the University after knowing a fellow female student allegedly recorded their nude videos and sent to a man living in Shimla, and there these were leaked afterward. Although, the university denied all allegations until students protested and many of them even fainted or reportedly attempted suicide. That’s when this astounding news managed to draw media attention and administration.

Sadly, this is the reality of women’s safety and rights in this country, where they even have to face power that tries to muffle their voices against these crimes committed within the University premises because University management is worried about its reputation more than ensuring safety of students who bank upon them blindly. Fortunately, students didn’t choose what our society generally impose on women –silence. Instead, they spoke against this despite the efforts of the university to dilute this case.

Although the reality of the case is to be ascertained by the police, yet the public response to this case is quite strange. It’s probably because feminists who vociferate over every case in which men are accused, are awkwardly silent. As if the girls whose privacy and modesty was violated by a girl, aren’t women at all. Therefore, the outrage is more about the man than that girl who contrived this whole thing. Her behavior is downright disgraceful and sordid that deserves equal condemnation and punishment as it is given to men. Why did she do something like this to other girls? Why did she send videos to her accused boyfriend? And what was the intention behind this? All of these questions are continuously bothering us and making us worry about our safety and the girls who are living in hostel and Pgs.

We live in a society that advocates punishing men even without proper investigation of a case, but uncomfortably stammers when a woman does the same crime. In this case, the girl is the fountainhead of this immoral harassment. Although her doing this heinous crime is also a question if she was mentally sick, jealous, or threatened, honey-trapped by the accused man? However, even if it’s true, it doesn’t shroud her crime. As it is believed that a threatened person is morally not allowed to jeopardize others for her own safety or anything that purportedly coerced or lured her to do this.

Womanhood shouldn’t protect her from all the public condemnation and defamation for her action. For, our constitution spares no criminal, irrespective of gender or religion. Ironically, gender equality is never seen in such cases as it is seen when prime accused is a man in any case. There are many viral videos going through all apps in which girls are seen saying only man should be entrapped in it. It seems like a snare weaved only for man on account of any personal or romantic rancor against the accused, but crime committed by girl and boy is a terrible reality of this mentality that makes youngsters stoop this low to play with other’s lives, that too without any guilt, let alone a scruple of penitence.

It’s an unequivocal fact that this generation is sexually and mentally doomed. Youngsters are now practicing virtual sexuality inspired by the sexual allure exhibited on social media by celebrities and self claimed influencers, misguiding youths to excessively fall for it. Consequently, promiscuity, unhealthy fantasies, sexual adventures out of the bed, and immoral demeanors are immensely attracting them and devouring their sagacity to understand the right way to fetch sexual pleasure when their brains are hijacked by hormones. In this case, it’s reported that the girl was having a relationship with the accused man, but now another question arises if he was her boyfriend, how come a sane partner would do something like this even if she was beguiled or forced to do it!

In many cases like Ajmer sex scandal, the accused always plans to target one girl, and then makes her help him entrap others. Now social media is not only driving men sexually crazy, but also unraveling hidden fantasies of women who are mentally unhealthy to understand how to cope with jealousy and hazy adolescent competition with others in a state of hormonal effect.

In the era of OTT platforms, where profanity and sexual lunacy is garnished with a false sense of modern perks and directly served to youngsters. It instantly lures them to go for it as they are beguiled to think it is modernity, and everything even shameful actions such as mms are normal and cool. And they believe healthy ways of sexual exploration are outdated and boring. So, such a platoon of sexual maniacs covet to perform like the actor of fifty shades of grey, elevating their lust to reach their minds where sexual satisfaction is impossible and fantasies are enormously unbridled which can be seen in this case. The accused man might have demanded the accused girl to do something like this, and it might have gladdened both of them equally, or the story might be more horrible and even unimaginable after all the layers of this case will be peeled off.

What tarnishes humanity and an image of any institution more than criminals is hypocrite media. And our society has conceived it proudly. What happened in Chandigarh University not only bedaubed it with indelible shame, but also birthed fears in students as well as apprehensive parents. This media claims to be unbiased, progressive and perspicacious. In sooth, media is dressed in hypocrisy and senselessness because it is fixated on sensational news, instead of news that really makes sense. Media only prioritizes outrage, not any injustice or crime. Therefore, despite huge protests at University failed drastically to grab any attention until it pervaded social media.

Undoubtedly media empowers voices but it hardly has any idea about right voice. It adores indistinct noise. That’s what happened in this case. Media immediately became a fountainhead of information without any iota of authenticity and promptly disseminated conjectures about the case. What is truly toxic in Indian media, is it hurriedly becomes a court. Journalists become judges who think they are privileged to be able to decide who is the victim and the accused. Due to this unrestrained penchant, they ended up concocting news stories as illogically as they could do, and show why hypocrisy and senselessness is deeply embedded in it.

Various news channels deliberately blurred the picture on television despite the viral video of the accused student admitting her crime. On the other hand, the media desperately showed the accused man’s photo even when there is absolutely no evidence against him until the investigation is explicitly done. This is seriously detrimental to the male fraternity where crimes are imposed on a man if his name falls on a woman’s tongue. Media trial is injurious to the constitution. And what’s more pernicious, is the ridiculous definition of gender equality in this avowedly progressive and modern country where woman committing a crime is deemed doubtful, but man being accused by a woman is always considered authentic and ghastly.

I believe a progressive society is a place where criminals are treated equally, where people get equal rights and opportunities, and also no criminal is given laxity due to its gender. Hence, all involved in this case should be exposed and the truth behind these mms should be uncovered soon. And the govts take it seriously and attempt to ensure safety of girls in the hostels all over India.

Stop shouldering trauma now, just abandon it as it’s an intruder not a friend