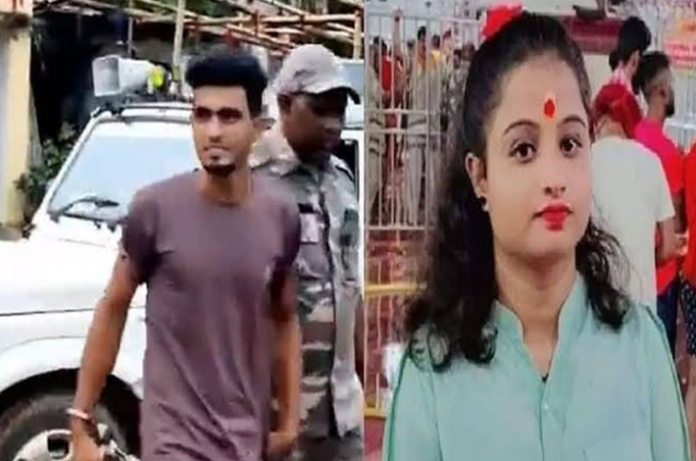 Hindus are currently paying for all the nonsense they were fed by politicians about secularism and brotherhood that apparently never existed. The secularism promoted through cinema and politics to lure Hindus to believe in interfaith love has always played the role of gallows for Hindu girls and boys. And all of these brutal killings of Hindus in the guise of love jihad by radical Muslims purposely to satiate their unhealthy lust to denigrate Hinduism, can’t stop, rather, the number of such cases is rising rapidly.

A 15years old girl Ankita from Jharkhand was mercilessly set ablaze by a radical Muslim boy shahrukh with his friends. The reason of this murder is that the girl has refused to marry and convert to Islam after reportedly knowing his religion. It’s horribly disgusting that such mental illness of love jihad spawned in religious places is living in Muslim boys that provokes them to harass Hindu girls, rape, and kill them anytime. Albeit, political parties depending on Muslim vote banks and secular lobbies infatuated with Islamic perks, always tend to rebuff all these theories pertaining to love jihad. However, truth creeps out whenever such incidents take place.

The case has sparked a religious controversy in the country, implying the reality of interfaith friendship and relationships that led to such murders where only Hindus lose lives. A video of a charred girl recorded in the hospital, has gone viral as the heat of this case crossed all boundaries, in which the victim demanded to get the culprit met with same fate. However such incidents are basically not healthy for fragile secularism that never wants us to speak against the minority.

Although unfiltered news about the victim being a friend of the accused, is going on, in which they are both seen standing together in pictures. If it turns out to be true, it should be a warning for all the parents of young girls whose maturity is not enough to sense this threat of love jihad. As in most of the cases, mature Muslim men plan to lure young girls and entrap them romantically, harass them sexually and slightly influence them religiously to make them convert to Islam, which is called victory. That’s why this murderer was seen smiling while being arrested, demonstrating his sick mentality against Hindus, and belief in Indian judiciary that never disappoints such monsters.

Why Hindu girls are their preys–

The first reason I unearthed after contemplating for long, is most of Hindu families are not much religious. Their faith is limited to worshipping and going to temple. Although a huge number of Hindus has been awakened by countless incidents, and substantial Hindutva, yet the rest is still following ancient way of faith in which they totally deny to recognize any religious threat coming after them to devour their girls and torture them.

Being an educated society, Hindus community is fervently providing equal opportunities to the girls, proffering all the educational environment, good life style, and phones. Young minds are prone to get influenced by any unhealthy ideology, habit and temptation. Social media is playing a role of a demon that is endlessly enticing Hindu girls to follow the actresses and start making bitchyfaces to show confidence and this social environment injects an urge to be famous, making them twerk in reels that attract such beasts using fake identity and affability created to impress the girls.

Mostly the family environment impacts one’s ideology that can be seen easily in Muslims. Even a 4 years old boy knows why Hindus are Kafirs, whereas minor Hindu girls aren’t even familiar with religion well. So they are doomed to fall for another temptation, be it religious or just romantic.  Therefore, Muslim boys always aim at young girls, chatting with them continually, complimenting them for their pics and videos, showing fabricated chivalry to make a next move, and influence them slowly with their faith wrapped in lies and sophistry. So, these preys are too immature and naïve to notice their sordid intentions, and this is how girls are being trapped, raped, and killed after any kind of denial from their sides.

Opium of freedom, secularism and Bollywood –

I strongly believe that freedom belongs to everyone, irrespective of their caste, gender and religion. As it is the first privilege bestowed upon us by democracy. It’s a right that unfortunately turned into a mental perk. The cinema badly infected with secularism and feminism has always curiously served as Islamic propaganda through their films to promote interfaith marriages with fictitious love stories that stand far away from the reality that Ankita’s burnt body disclosed publicly.

With countless examples of Hinduactresses known as atheists marrying Muslim men, young minds are beguiled to believe that love has no boundary, and end up falling for monsters with an intention to taste their bodies and convert them. Freedom to have their privacy at a very young age is a strong push towards the pit. Social media is confusing them, they are perplexed to differentiate between reality and fake world they are addicted to. Moreover,here comes what is the most dangerous chemical called secularism that murders all qualms. So, any opposition from family pushes girls a little more towards these perpetrators lurking to pull their skirts down and encourage them to do what they want, and defame their families.

I opine that Muslim men can’t be entirely blamed for these acts. That’s their basic teaching. They are trained, exhorted, and sponsored for these actions for a future plan to rule India. The negligence of Hindu parents must be blamed for not knowing their responsibility well. Instead of trying to extinguish fire, one must step back and know how he can protect himself. Monitoring minor girls is important. Impacting them religiously, and strengthening their faith and teaching about the hidden dangers of love jihad, must be prioritized. No matter what ideology youngsters want to follow, the onus is on us to clear their haze of immaturity and bewilderment. So that, no sugarcoated tongue of a monster can confuse them and devour them like Ankita.

We are a community besotted with secularism, unable to know what to do in order to save young girls from these demons walking around, selling veggies and fruits. As we all are familiar with the Indian judiciary, culprits feel safe in jails, as they bank upon the courts that the bail will be given to them no matter how heinous their crimes are. Which is why handcuffed Shahrukh smiled at the media, the smile that oozes no iota of shame, or regret for what he did to Ankita. The smile that laughs at Hindus, and their helplessness. The smile shows reality of Indian judiciary.