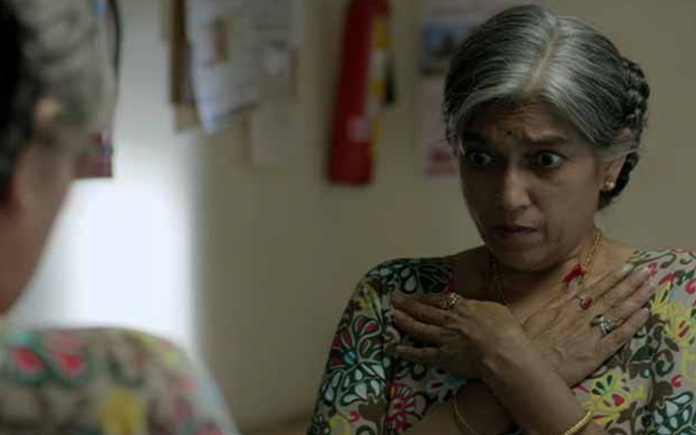 Bollywood has been badly infected by its prevalent propensity to degrade Hinduism that creeps out oftentimes through overexcited feminist actresses who are unable to understand basic things due to their involvement in uncanny reverie of modernity and wavering sanity. Liberalism is quite a vogue but effective tactic being rigorously used in Bollywood for fleeting fame in the media while their acting seems dull. This time the most so-called scared family man Nasruddin Shah’s second Hindu wife Ratna Pathak Shah expressed her unwanted opinions about the Hindu ritual known as Karwa chauth, and blurted out that it’s appalling to see India becoming Saudi Arabia where women still do karwa chauth that created a controversy this shah family is generally fond of. As many times, Nasruddin Shah has claimed he fears that his secular family might face mob asking them about their religion. Ironically, these people feigning victimhood never feel unsafe when a hindu is mercilessly beheaded by his customers just for supporting another Hindu who spoke for the Dharma, nor do they find it appalling.

It’s not quite possible to fathom what’s the root cause of this disgusting penchant growing rapidly amongst women who are blindly following these actresses enjoying revelries and giving unfiltered Gyaan about a particular religion for their showcase of feminism. It is why Ratna shah has given such an absurd statement on a ritual known for eternal love between husband and wife. It’s pernicious mentality proliferating amongst over-intelligent actresses influenced by liberal and misandrist frivolity where cultural ways of celebrating one’s belief freely is an issue to this faction of irascible women thinking everything belonging to Hinduism is primitive, as Hindu community is not intolerant enough to harm a woman speaking something about their faith, unlike other communities. Consequently, this type of deliberate denigration of Hindu culture is seen repeatedly in India.

An quintessential ritual of eternal love –

Karwa Chauth is a beautiful festival for married Hindu women to express their unfathomable love and utmost reverence for their husbands. Out of their own volition, they opt to fast for a day without food and water and pray until the special full Moon shimmers in the dark sky. There is a belief in Hindu culture that this fast is for husband’s long life. If all the women follow this ritual for their love, praying for their husbands and prosperity and long-lasting affection in the marriage, how is it appalling to women who believe in Valentine’s day?

If worshipping a goddess with a fast for a day makes liberal women quiver with tremors of anxiety, despite the fact that nobody is going to coerce them to do the same for their unlucky men because they are awkwardly wrapped in a habiliment of feminism but want them to express love on Valentine’s day to dodge any domestic turmoil. This latest version of unhealthy feminism is not going to be effective in tarnishing the value of Hindu faith engraved in women for centuries that can’t be eradicated by these vicious attempts in the name of modernity and liberalism.

Tolerance shownby Hindu community is irrefutably a prime example of why Hindu culture is routinely targeted by pseudo feminists relishing their lavish lifestyle while lolling on their cozy couches. this actress known for her unfunny and conceited tone ‘Monisha’ is basically venting out her husband’s anger on his behalf as now their political inclination isn’t in power.  Time to time, they create a controversy, sometimes using a Muslim victim card, and sometimes using liberal logics like this recent comparison between India and Saudi Arabia, evincing their hatred for Indian culture. The bothering fact is, India shouldn’t be compared with fanatic Middle East countries over women’s freedom and rights.

These frustrated people must take a slight moment and inhale calmness and then ponder what they say without chewing any piece of hypocrisy and bigotry so that they can get an epiphany understanding that India is not a democracy with strict fanatic and misogynistic laws like Afghanistan where women even can’t step outside without a man, can’t roam in market without hijab including minor girls. When defying is noticed, punishments of this offense have horribly shaken the world quite often. Women caged in burqa are beheaded and stoned to death in Islamic countries, their lives are limited to being a breathing sex toy, let alone their rights. No feminism exists where real fanatics live. All the hullabaloo is heard where there is democracy. All the feminist outrage is limited to India and other democratic countries because radicalism is uncontrollably allergic to feminism. As a result, sensing the real fanatic threat lurking behind one statement of these liberals like Ratna shah and her husband, they never target any other religion and their objectionable rituals. Therefore, even after all the intense atmosphere during triple talaq case, such hypocrites were busy basking in Maldives.

Insanity disguised as modernity has to cease –

I believe that it is the time for Bollywood and its overgrown dimwits to control their foul mouths and stop this insanity that oozes out and precipitates unnecessary conflict in the society. It’s an apparent fact that their tongues are besotted, and it suits their lifestyle, however the effect of what they spew out in their befuddled state engenders lots of problems for other women who are truly a real symbol of womanhood, not a yelling mouth that abuses men and attacks particular faith in order to look more secular and get poxy fame that evanesces in a while.

Bollywood must understand that Hindu faith is not a bait for actors with low IQ to become famous amidst secular and liberal lobbies by insulting Hindu deities in the movies, mocking hindu culture, and blame it for all the fictional atrocities against women, cunningly sidelining the real atrocities women are facing in the society due to the fear of radicals and their direct actions against who speak. This controversial couple of Shah needs to introspect now and realize that no woman has been beheaded for not fasting on Karwa chauth and also must gather enough information about what happens with women in Islamic countries when they even think of taking off their hijab and choose to speak against their men. They are familiar with the fact that reality will rend their hypocrisy, and undress their liberalism in a second, therefore they strongly avoid discussing anything pertaining to other religious faith that can jeopardize them. So, Bollywood! The time has gone when all your disgusting content against Hinduism was admired and ignored by mass. Your insanity is not appreciated in new India, your secularism can’t mock someone’s faith, your liberalism can’t make someone feel ashamed of his culture, and faith. An era of dark hinduphobic secularism has ended. The days of comforting hypocrisy are gone.