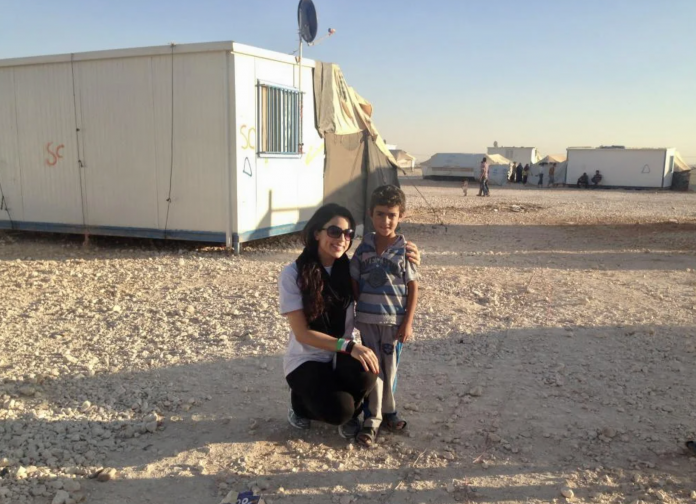 Ayat Abuznade’s humanitarian journey officially began in 2014 when she volunteered to serve in the Zaatari Refugee Camp located in Jordan. As many Syrians fled their homes, they sought refuge in Jordan.

During Ayat’s time in the camp, her heart went out to the families she served as she saw the horrific effects of war on over 80,000 vulnerable people. One such example was Yaseen. Yaseen was an 8-year-old refugee “with a warm gentle sparkle in his eyes that Ayat could never forget.”

Unfortunately, like many other children in the camp, Yaseen had a disability due to the war. A part of his arm was amputated after a missile exploded and tore up his arm. The missile hit as Yaseen and his family were fleeing for safety.

While Yaseen made it out alive, the effects of the war will forever be with him. Understandably, Ayat’s view of the world changed after that day. She would go on to dedicate her life to those in desperate need.

In 2015, she went to Lesvos, Greece to help with the refugee crisis. As thousands of refugees poured in, the small humanitarian organizations were quickly overwhelmed. Ayat saw the misery that the refugees and how some did not survive the harsh journey to safety.

She later returned to Lesvos, Greece in 2018 after hearing that it had become “the worst refugee camp on earth.” So, with newfound conviction, she started Team Humanity USA.

Ayat and her team hope to “alleviate human suffering by advocating for basic human rights, promoting human welfare, and creating opportunities for communities in despair.”

Team Humanity USA’s mission is to provide “humanitarian and educational outreach to vulnerable communities in the US and abroad by responding to major emergencies, fighting disease and poverty, as well as nurturing and promoting human welfare.”

Today, Ayat and her team are involved in humanitarian missions across the globe. In Africa, she started the “Water Well Project.” Their goal is to provide necessary clean water to villages in Kenya by giving them access to wells. Having access to clean water will result in less food scarcity, better hygiene, fewer diseases, and more.

Team Humanity USA has many other notable projects in areas such as Ukraine, Afghanistan, and Lebanon.

In Ukraine, Ayat and her team are responsible for evacuating over a thousand refugees as well as providing needed aid. The team also helps evacuate families in Afghanistan and provides recovery assistance. As for Lebanon, Team Humanity USA provides food and other care to starving families.

Considering everything that Ayat has done, it is no wonder that she received the 2022 Anthem Humanitarian Service Leader of the Year Award. Her dedication to those in need, and her ability to organize and inspire others to do the same is something that deserves recognition.

While Ayat’s journey has been big, it is not yet done, and she hopes to “continue to do anything possible to instill hope and happiness back in the lives of people.”