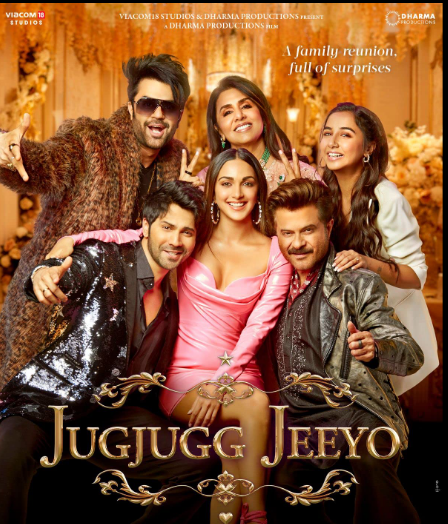 What happens when a son who is divorcing his mother learns that his father wants a divorce as well? If the son can’t manage his wife’s success, then the father wants nothing more than to be left alone.
Director Raj Mehta cautions that respect and faith are necessary to keep love alive in any marriage, whether it was arranged or not. Interestingly, these two components seem to be lacking in his approach to the topic. There are moments that make you think the film is going to offer something fresh, but ultimately it just skims the surface of male entitlement and chauvinism.
The authors have enveloped the complex subject in so much sugary situational humour in an effort to make the bitter pill palatable, but in the process they have diluted its impact. It’s not enough that most of the action takes place in Patiala. Maneish Paul always seems to be accompanied by a background voice calling out “Munda” (boy) whenever he appears on television. Because their reasons have been watered down by the humorous treatment, the characters are difficult to take seriously. When the mother-in-law and daughter-in-law talk about their marriage, the film finally finds its mumbled voice.
For the rest, it looks like the makers don’t trust the audience, so they pad the story of damaged relationships with comedic noises in the background. So, they give the Punjabi family world created by Karan Johar the slightest of prods. Women in the family can now join their male counterparts in raising a glass in celebration. What a step forward!
Each actor does their part to ensure a successful production. It’s safe to say that VarunDhawanepitomises the “tubelight” role Kukoo gives himself towards the film’s conclusion. Kukoo is the type of guy that needs a couple Patiala pegs to light up his intellect, which is hidden somewhere beneath his six-pack abs. Kukoo’s sensitive masculine ego flinches when his wife, Naina (KiaraAdvani), climbs the corporate ladder while he’s left behind to manage a nightclub, despite the fact that they’ve been married for years and are much in love. As a result of her success, he loses his sense of being better than her and loses his sense of being a man.
Before Kukoo can tell his father BhimSaini (Anil Kapoor) about the impending divorce, Bhim confides in him that he is considering ending his marriage to his mother Geeta (NeetuKapoor), whom he calls a “vegetarian lioness,” and that he has found love again with Meera (Tisca Chopra), a math teacher. Some of the tragicomic moments are natural, but others have been artificially inserted to keep the story light and fluffy. One such instance is when Bhim first meets Meera and introduces Kukoo to her.
Meera’s character has been simplified so that Geeta can take centre stage. We are never told what she saw in Bhim that made him become so captivated by her. The film spends a lot of time assuring the audience that the plot has nothing to do with a sudden increase in hormone levels in the teenage protagonist, but it doesn’t have time to address the entrenched patriarchy between the father and son, which has trickled down to their wives and Ginny’s (PrajaktaKohli) as well.
Anil Kapoor, despite the film’s weak script, is the film’s beating heart. His interactions with Varun in a comedic capacity are among the film’s most memorable moments. NeetuKapoor makes a stunning return and steals the show in her brief appearance; one of the film’s most emotional passages may be autobiographical. While Kiara convincingly portrays a wife who feels she has exhausted all possible avenues for saving her marriage, Maneish Paul brings the humour with his impeccable timing.
I would give this movie 3 stars because despite its financial success, the picture will not be remembered fondly by audiences for very long. Only some hearty laughter and lively discussion around the dinner table should be expected.