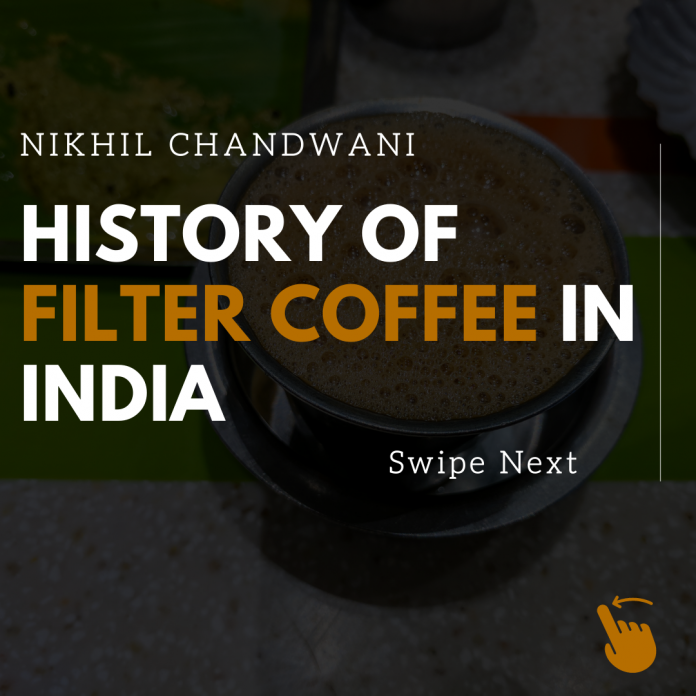 The tale of how a few beans were smuggled across the Sindhu (Arabian) Sea to India and eventually became the second most loved beverage in the nation is a story that will fascinate you. Today we will explore how Filter Coffee was introduced in India and the history of this fascinating drink in our country.

Brewed strong with lots of fresh, sweetened milk and served in tiny steel cups that sit atop horizontal containers, this local coffee has been a favorite in South India for centuries now. According to lots of history websites, on a pilgrimage to Mecca in the 16th century Baba Budan, a Sufi from Karnataka state, discovered the wonders of coffee.

Eager to grow coffee at home, he illegally smuggled seven coffee beans from the Yemeni port of Mocha in his underwear. Returning home, he cultivated the beans on the slopes of the Chandragiri Hills in Chickmagaluru, Mysore State. This hill range was later named after him as the Baba Budan Hills. Yes, the first filter coffee Indians had were grown from seeds that survived in Baba Budan’s underwear for weeks, possibly months.

Rev. Edward Terry, chaplain to Sir Thomas Roe, who was an ambassador at the court of Invader Jehangir, provides a detailed account of its usage (1616):

“many of the people there (in India), who are strict in their religion, drink no wine at all; but they use a liquor, more wholesome than pleasant, they call coffee, made by a black seed boiled in water, which turns it almost into the same colour, but doth very little alter the taste of the water. Notwithstanding, it is perfect to help digestion, to quicken the spirits, and to cleanse the blood.”

According to British Historians, India’s first coffee house opened in Calcutta after the battle of Plassey in 1780. Soon after, John Jackson and Cottrell Barrett opened the original Madras Coffee House, which was followed in 1792 by the Exchange Coffee Tavern at the Muslim, waited at the mouth of the Madras Fort. The enterprising proprietor of the latter announced he was going to run his coffee house on the same lines as Lloyd’s in London, by maintaining a register of the arrival and departure of ships, and offering Indian and European newspapers for his customers to read. Other houses also offered free use of billiard tables, recovering their costs with the high price of one rupee for a single dish of coffee.