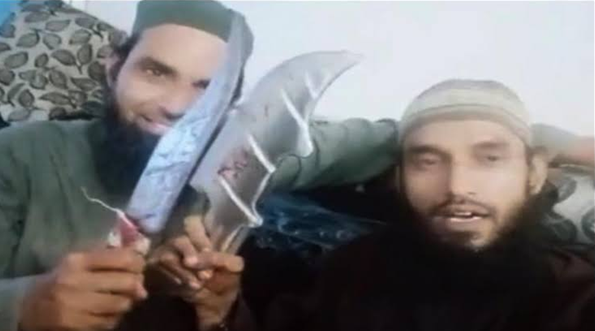 The loud painful screams of Hindus that India was forced to hear in 1990 in Kashmir, are emanating from all parts of the country now. It’s abject helplessness of Hindus in this country where minority is obsessed and privileged to slaughter the majority wearing a habiliment of victimized image created by political parties and secular lobbies for personal gain. As a result, a Hinduwas ruthlessly butchered with daggers in Udaipur by two radicalized murderers Gos Mohammed and Riyaz Mohammed chanting ‘Inshallah we killed him’ in a viral video they recorded and shared on social media while beheading hindu man.A Hindu man Kanhaiyalalwho was a tailor in Udaipur, had recently shared a post in support of Nupur Sharma and was arrested later too in a state ruled by Congress party. Police had received many security concerns by him,yet police seemed reluctant to believe in death threats he received. And then, two Muslims disguised as customers attacked him mercilessly and murdered him.

Humanity is bedaubed with shame, when Hindus community has seen a video of Kanhaiyalal’s agonizing murder with two radical Islamistsrejoicing the murder proudly and expressing their joy after killing a Kafir inthis secular and democratic country where democracy is evidently a paralyzed notion. Soon, horror engulfed entire country as planned by radical killers who also wished their sword to reach Pm’s neck. The visuals of Kanhaiyalal’sbody lying on the road with his blood dying the lane have implied and filled Hindus with horror, making them ponder what is going to betide them if they accidentally believe India to be a safe haven for their community where Taliban ideology of radicalism is thriving secretly.

Silence is only what can be seen after a Hindu killed by cohorts of Islamists who brainwash undeveloped minds in their religious institutions. All the secularism, activism, outrage of Human Rights activists goes missing like a logics of Indian media debates. Question is, doesn’t a killed Hindu matter in this secular country? Do Hindus not have fundamental rights when it comes to expressing their opinions and supporting someone who dauntlessly speaks for their Dharma? Or freedom of speech for Hindus is also islamophobic in India, and a blasphemy? I think we all know the answer –secularism doesn’t want anyone speak for a Hindu if minority is a killer.

Danger is lurking beneath this veil of secularism that came out breaking all layers of sophistry in Udaipur case. Fortunately, nonetheless Muslim communityhas a few intellectuals left unaffectedwho descry this pernicious mentality of Taliban radicalism being covertly implanted in Islamic schools. One of them is Kerala governor Arif Mohammed khan who has brilliantly exposed the rampant radicalization happening rapidly inside Madarsa andsaid, “We worry when symptoms come but refuse to notice the deeper disease. Children are being taught in madrassas that punishment for blasphemy is beheading. It’s being taught as the law of God. What’s being taught there should be examined”. Consequently, India is brimming over with such chants ‘Sar tan se juda’ by radicalized faction of Islamists. That’swhy nowDemocracy feels like a tamed bird caged by radicals.

Shocking enough, recent ruthless attacks on Hindus have soared up rapidly that have to be ascertained with sheer logical thinking. Since Hindutva ideology is flourishing swiftly, awakening Hindus to understand the plight of their rights and exhorting them to outrage against the wicked mentality that has continuously been tarnishing and disparaging Hinduism through art, politics, and liberalism. Moreover, it is also unearthing the buried facts about paralyzed freedom of expression for Hindus, questing them to recognize that the threat of Islamic radicalism is closer than appears in the recent murders and violence. As a result, Islamists are worried about this evolving ideology that is substantially damaging their coveted dream of making secular India an Islamic country like Afghanistan, Pakistan and unappreciative Bangladesh.

Hindus community is bewildered by faceless horror lying in the eyes of Muslim community, that’s why Kanhaiyalal who tailored clothes for his Muslim customers for years, somewhere failed to perceive a death threat before sharing a post on WhatsApp and other platforms. Perhaps, the lessons Kashmiri Hindus taught entire hindu community in all parts of India faded into oblivion, failing to apprise us of what friends, neighbors, colleagues do when it becomesa matter of their religion for them. The killers whom Kanhaiyalalconsidered his friends and customers didn’t flinch even for a second to behead him unabashedly and they recorded this dastardly crime on camera to show the world what radicalizedMuslims can do as a privileged and Taliban influenced minority.

Kanhaiyalal was always a kafir for his Muslim friends, therefore, while chopping the nape of his neck, they neglected his continuous beseeching recorded in the video. “I have two sons, please don’t do this. Sir, what did I do, why are you killing me sir?” these were his last words to the merciless monsters. An imploring hindu with gushing salutations in a terrified state gladdened those self claimed Islamic guards of theirreligion. Their Exhilaration over his blood spurting out of his body was horrible enough to shudder any human being except the ones who are mentally trained to believe in a theory of beheading Kafirs.

Hindus community relentlessly outraged, coming out to raise voice against this terrorist mentality with thunderous slogan ‘Hindu lives matter’ on the road and social media. This boisterous outrage of Hindus for Hindus has deeply affected some magazines that are in the grip of discernible influence of terrorism. Obstinate attempts of shadowing radicalism influencing minority have been quickly made, explaining illogically and hatefully why hindu lives matter is a dangerous slogan. This is how Hindu livesare demeaned, their pain is mocked and their existence is ignored. As these defected parts of journalism are unimaginably enamored with the guns of terrorists, and allergic to the tolerant hindu community because Hindus don’t inject fear of beheading and violence in them like Islamists. So, sadly this type of continuous berating of Hindus has been normalized in India where insulting Hinduism doesn’t scare anyone, nor lands them in trouble leading to brutal murders. For, Hindus aren’t taught to behead anyone who denigrates their faith, and religion, neither are there religious books that justify all violence and killings for the honour of their God.

India is apparently on the verge of Islamic radicalism like Taliban. It is an unfiltered warning coming through these brutal killings of Hindus for utilizing their fundamental right to express. If the govts keep on showing laxity in doing something crucial right now, this culturally and constitutionally enriched democracy would be sabotaged. It’s the time to disbud this growing grisly ideology for the bright and peaceful future of this country, where fundamental rights will be for all, nobody will be hunted down like animals by lunatic elements in the name of blasphemy, nobody will have to tolerate the insult of their faith and retaliate with same intensity. No woman will have to receive death and rape threats for questioning someone’s religious history who deliberately speaks derisively about her faith. India should be a safe place where majority doesn’t have to cry and slogan ‘their lives matter too’, where religious fire won’t perish anyone.