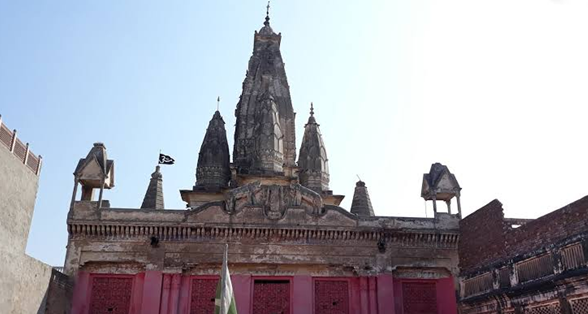 Today, I want to tell a story of a temple that has lost its deities and its Hindu religious glory after the independence of Pakistan as now democracy no longer exist there. Hindus and their temples are in a predicament where anything can happen at any time and there is possibly nothing can be done about it. An illustrious history of Hindus in Pakistan is visibly present in the carvings and towers of ancient dismantled temples and houses with cultural sculptures of Hinduism that are now clothed by Islamic inscriptions.

Traces of a magnificent past

Featuring elaborately carved pillars with intricate motifs of Hindus architecture and one tall tower accompanied by four more small towers decked with Hindu designs like lotus, and bells on their surfaces sitting on the middle of the huge roof with four canopies on each eaves, stands a Hindu temple with the concrete inscription of Hindu deities names engraved on its entrance joined by one idol and two elephants on each side. Bara Mandir formerly renowned as Laxmi Narayan Mandir dedicated to Shri Krishna, Laxmi Narayan and Shri Ram is in Chiniot city Pakistan, the city is liaised with Chenab river. It was built by Sikh Maharaja Gulab Singh jamwal of Jammu and Kashmir in 1840.

Since democracy was banished from Pakistan and it became an Islamic State, atrocities against Hindus and their temples grew rapidly in order to entrench Islamic symbols in every building, temple, and even the minds of people with different religions. Bada Mandir had waded through all cultural and religious alterations, beholding an irascible faction of Islamists chiseling Hindu symbols out of its walls, towers and entrance, ravaging idols of deities and decapitating statues of women and animals built on the walls and entrance for beautification purposes. Now it is a titular temple wobbling on its damaged pillars without any significant Hindu identity except beheaded figures and half smudged hindu inscriptions written on the parapet, still hoping for its deities to return and rejuvenate its marvelous glory which has been tarnished by the Pakistani govt.

The wobbling existence of Hinduism in Pakistan

These splendid 200 old years Bara Mandir has been converted into a school, erasing all symbols of Hindu existence inside the temple and imbuing it with Islamic culture. It is now an amalgam of two religions where half is Islamic and the upper part is a glimpse of the dying Hinduism in Pakistan. This temple is precisely portraying the misfortune of temples that have been malignantly dismantled, razed down, and decorated with Islamic flags replacing saffron om flags. Their ruins are unheard tales of grief and helplessness abandoned by democracy and freedom by the Islamic govt. Their decapitated idols still intact tell a story of murdered constitutional rights of Hindus, showing the world how horrifying it is to shrine in a country where only mosques are believed to be sacred. As a result, thousands of Hindu temples have merged into dust, of which only a few hundred could survive, and their existence is not guaranteed since their survival is based on how far religious tolerance of the Pakistani govt can go, and what happens in India. Whatever happens in India allegedly against Indian Muslims entails huge risks for these temples and the Hindu community in Pakistan, that’s why Hindus are immensely tortured and killed there, and temples are destroyed on festivals, following the news of Indian media.

There is a huge slew of abandoned temples standing with remnants of their glorious history separately in a land ruled by a partial constitution. While the minority in India is proliferating huge mosques everywhere, a minority in Pakistan is helpless to save remaining temples and is forced to wear the Islamic symbol white cap to be allowed to worship their deities. I believe even this comparison is a huge shame as partition was based on religion, so Pakistan was born for Islamizing a bifurcated part of Bharat, but secularism was secretly infused into the Indian constitution, allowing unscathed fragments of Jinnah’s tendency to survive in India. It’s axiomatic why Pakistan is a dark land for minorities where religious freedom is a hoax, where the theory of secularism is deemed ridiculous. Consequently, temples are there, but without idols. Hindus are there but without religious freedom.

Bara temple might have lost its religious prominence under Islamic rule, however, its significant Hindu carvings are still alive, having a historical and cultural sheen on Chiniot’s famous wooden furniture. The intricacy of Lotus and other flowers motifs in the furniture impeccably present centuries-old Hindu culture, and exudes a sense of lamentation reminding us of what we have lost following avaricious and ambitiously profligate leaders who chopped this land for their political penchant and yielded this religious trauma for Hindus in all parts– Pakistan, India, and Bangladesh.

Although all seems to be fine in India, atrocities committed against the Hindu community in Pakistan are beyond our limit. It’s quite elusive to envisage living in a society where you are routinely tortured for your faith, your girls are abducted, forced to marry old men after converting to Islam, where you have to wear a cap to worship your God, where your temples are set on fire by Islamic mobs with no iota of guarantee to get justice in a country where a teacher was given a death sentence for blasphemy because a student saw her saying something blasphemous in his dream. Pakistan is a land where even sanity doesn’t exist, for it is substantially difficult for sanity to coexist with terror and a condescending swarm of Islamists.

It’s astonishing and bewitching to watch this temple flaunting its ancient grandeur despite having lost its religious magnitude. It is emblematic of the resilience Hinduism has endowed all generations from its inestimable advent, encouraging Hindus to not commit such mistakes again, naively jeopardizing their existence. Like temples, the Hindu population is also decreasing on account of continuous pressure and threats from the majority baying to torment them maliciously and intentionally snuff out a last whiff of Hinduism in Pakistan like Afghanistan. So, evidently, it is a dire glint of an invisible danger lurking underneath secularism that is deeply injected into Hindus of India, displaying what would be their fate once they are a minority in India as well. There would certainly be no place to skedaddle to, no religious freedom, no fundamental rights, no hope for existence, just threats hovering overhead and sights of dismantled temples deliberately left with beheaded idols to make them deplore their plight as a minority. Pakistan is an unfiltered reality of the fact as to why democracy and secularism is a bewildering lie for minorities when a nation becomes an Islamic state.