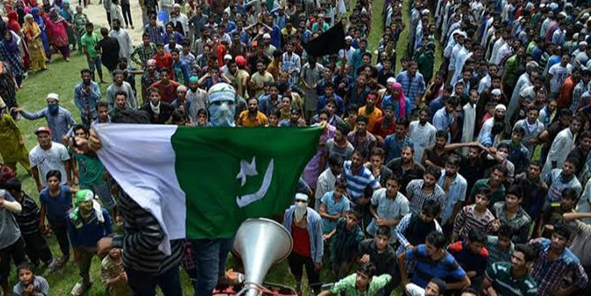 The ongoing target killing of Hindus in Kashmir is a matter of concern not only for the govt, but also for hindu community that has been fobbed off with false assurance of safety, and security in the valley for decades, but terrorist attacks have discernably never ceased. Within a span of a few days, several Hindus have been killed by terrorists whom even agencies fail to find and eliminate. The reason of which lies in a decade old theory called Kashmiriyat, initially it was presented as a term for harmony and secularism in the valley, it, however, is now a hateful Islamist attempt to make Kashmir bleed, as it is overtly inciting these terrorists attacks on Hindus for its despicable purposes.

Kashmir is actually a beautiful hell for Hindus whose religious roots were plucked off by Islamiyat, it’s being reaffirmed by recent islamic attacks on Hindus happening unabated. Kashmiriyat is apparently an injection of hate which is continually producing violence, and a false of martyrdom as exaggerated by radical Islamists in the valley who were immensely but covertly exhorted by political power. It was a discriminative and hateful ruse to erase the complete existence of Hindus from the valley which happened in 90s, when radical Islamic terrorists had orchestrated a bloodshed of Hindus and soaked Kashmir with horror, blood and shame. Wondering why this happened if it was about harmony and secularism? It’s because this Urdu term means Kashmiriness and it excludes Hindus from this. It can be comprehended by what Ambedkar said that brotherhood of Muslims is solely for the Muslims. As a result, an ethnic cleansing of Hindus happened, making Hindus get slaughtered, raped, and burnt. It was like an explosion of a volcano which Islamists created in the hearts of Muslims against Hindus for decades, devouring 80percent of Hindu population. And the entire majority rejoiced this genocide along with the terrorists whom they secretly loved on the streets doused with Hindus painful screams. and are still loving.

After Hindus absquatulated, the Kashmiriyat interpreted by Islamists demanded Muslims to wage a war against the army which is clearly precluding them from leading to their dream to reconnect with the detached parts of KashmirinPakistan. The mosques that were inundated with boisterous chanting RalivGalivChaliv in 90s, had now started to instill more heinous arduous purposes in the minds of Muslim youths, cleverly inspiring them to seek martyrdom as it’s the fight against the nonbelievers, consequently, a whole decade under Congress govt, Indian army was routinely affronted, attacked, and publicly beaten by masked Muslim boys liberally known as misguided youths, because the govt was too timid to unchain the hands of soldiers to edify these radical stonepelters.

Kashmiriyat theory dispersed rapidly in the valley, urging immature Muslims to participate in this avowedly war against Indiawith a bewildering aroma of godly rewards like 72 virgins. Therefore, all the infiltrated terrorists would get shelter, weapons and information about the army to carry out any attack, by local people risibly termed as moderate Muslims. This fidelity with terrorists and anyone who works for the Kashmiriyat is deemed a prayer, and this is still unscathed.

Having abrogated article 370, the govt has decided to bring back Hindus in Kashmir and establish them, employing them under special package, although it seemed to be a new dawn of Kashmir, but as soon as the haze of delusion removed, the reality instant stifled our fledgling hopes. The terrorists issued their objection and ire against this move of the central govt, threatening to kill all Hindus one by one, no matter what. A terror outfit Kashmir freedom fighters released a statement on social media which later was spread by local Muslims having an unbreakable bond with them, saying that Kashmir is a land only for Muslims, furtheradded tourists can’t be allowed to live here, pointing at Hindus. If this necessitates us to sacrifice our lives in this quest, we will gladly be called martyrs, but we won’t ever cease this war. This is categorically obstructing govt’s efforts to establish peace and harmony, and lead Kashmir to new heights of development, however these efforts are worthless as the majority of Kashmir is unbelievably besotted with these terrorists whom they see as their heroes.

At this time, Kashmiri Pandits who were brought back in Kashmir under Pm package, are being targeted and murdered by unidentified terrorists. Terrorists are accurately informed about their targets to avoid any mistake, as a result, of all the employees in the offices, teachers in schools, and doctorshospitals, terrorists unmistakably murdered only Hindus. Nevertheless, suspecting Muslims peers is not allowed in this country as the majority is already termed as islamophobic.

A terrorist is nothing but a boneless puppet, if he doesn’t have political support, religious support, and local support. Here in Kashmir, they have received everything profusely. As the local Muslims idolize them as heroes. Therefore, helping terrorists with weapons, shelter and information about the enemy is explicitly their priority, and the political support standing with them, mollifies their fears of legal action. Moreover, leftists ecosystem is well-prepared to victimize them if any action is imminent. The govt can ensure safety from identified terrorists, but protection from terrorists disguised as co-workers, officers, doctors is quite elusive. As all people involved in these planned murders believe this theory that says a murder a day, keeps Kafirs away. There is a little hope for Hindus to be safe amongst the colleagueswhose religious teachings make them see Hindus as Kafirs, or nonlocals.

What’s really worth noticing, is how intensely business, and tourism is growing along with terrorism which sojourns in latent corners of the valley, but what’s actually bothering the majority in Kashmir, is the presence of Hindus living and working there as citizens of Kashmir not as tourists. This is a dire form of terrorism which is clothed by their definition of Kashmiriyat. Subsequently, within a span of few months, many officers, doctors, professors have been expelled for their involvement with terrorists who lurk to kill Hindus. For, it’s believed to be a fight for freedom, so they gladly connive with terrorists, proffering them crucial information about Hindus, and provide them lethal weapons. If there is a suspicion about this terror affection of Kashmiri Muslims for terrorists, then you all must once rummage through all the details of murdered Hindus in office, schools and hospitals and unearth the truth that removes all confusing, making us all see how terrorists along with their informers planted in all departments professionally pressure Hindu employees to be in office, and kill them, after identifying them, and Hindu teachers are asked to disclose their identity in schools, dragged out and shot dead.

Kashmiriyat is divisive and pernicious –

Kashmiriyat is divisive because it lacks secularism, and tolerance toward other faiths. It is pernicious as it nestles terrorism. Which is why Govt must emphasize the purpose to not only obliterate terrorism which crosses borders, but also that terrorism which secret sprouts in the hearts of Muslims who have penchant for violence, stone pelting, sponsoring and helping terrorists. Govt should be keen to know why Hindu tourists are safe in Kashmir but not citizens. What is the disgusting agenda of Islamic terrorists behind this condescending sense of Kashmiriyat? It behoves the govt to ensure the money Hindu tourists spend in exploring the beauty of Kashmir isn’tused to sponsor the weapons, vehicles and shelter for terrorists who are being trained to eliminate Hindus from the valley.