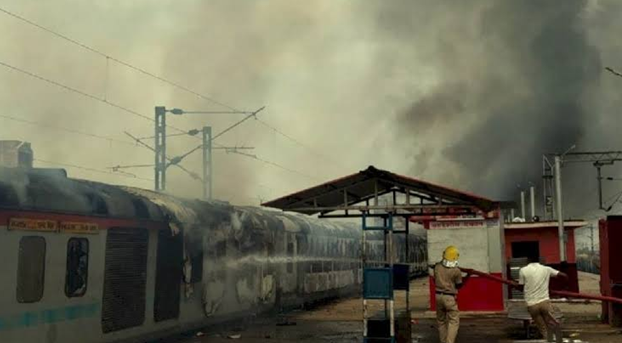 The commotion at the railway stations, roads and highways against any reform or bill or policy of the central government has now been easily normalized in India. Destroying public property and spreading violence on the pretext of protesting against the govt is seriously damaging the reputation of India, and scoffing law and order. Democracy allows all uncompromisingly to protest, but peacefully, however peaceful protests are a sheer joke in this country. Ever since, Indians forced Congress party devolve power to the ruling party, India has been suffering a rash of arson created by people protesting against everything the new govt brings on the table. This is a prevalent Congress’s ruse – don’t let them work, if we are not the one sitting in the powerful chair.

India is currently in the whirlpool of chaos contrived by the pernicious opposition hankering for power more than anything. Ergo, whatever the reform the modi govt attempts to bring in any sector, the fear and misinformation is circulated and then the well funded crowd trained for creating chaos and violence is invited to protest, and then arson engulfs the nation. From farms bills to Agniveer scheme, in the name of protests, rioters purported to be farmers and now as army aspirants have burnt down several trains, buses, and also vehicles belonging to common citizens. The disturbing pictures of masked men with rods attacking police, vandalizing the stations, public property and spreading violence across the nation in the name of protests, are worrisome.

Why is the definition of democratic protest changed in a span of a few years? It changed drastically as soon as the opposition parties fared badly almost in all the elections, and failed to defeat the mighty Bjp that has been enhancing its popularity since 2014.  This miasma of repeated debacles is making Congress and other parties that are clearly allergicto it, uncomfortable and grumpy. This can be noticed almost in the behavior of their leaders. They are despondently dragooned to grab each other and feign friendship with a purpose to pulverize the Bjp. Consequently, they are politically ready to mollycoddle anyone for being able to snatch away power from Bjp. That’s why any kind of protest instantly receives their unsolicited support and manpower. And all it necessitates, is a proof that it is against the Bjp for the revival of their parties. The farmers protest is an irrefutable fact of this ongoing political game

The ruling party Bjp has been in opposition for decades, well known for their discernible and incredible ways of protesting, still protests have presumably never been violent. I reckon that protesting democratically shows the ideology of a group and Bjp is unquestionably a party of ethics imparted by its intrepid, outspoken and political savvies. A party that proudly talks about preferring the nation to power, can’t ever sponsor and instigate a faction of belligerent people to set this country on fire for political gain. Then why is protesting against anything a new political maneuver? Who has conceived this tendency, forcing people to believe that arson is also a part of democracy?. Even deracinated intellectuals sitting in other countries jump in the discussion to justify violence and also explain why a small amount of violence to topple a govt is appropriate. If the govt is of Bjp.

However, this propensity to express rancor against a political party is dangerous for the security of a country where protests are furiously infused with violence and anti national sentiments. The ruling party should break its hauteur slumber and see the condition of the country, and emphasize the need of profferingthe facts about a scheme first before announcing, recognizing the political threats which the party doesn’t seemto be taking seriously, so that political parties lurking to topple the govt fail to meddle the information and provoke the youngsters. For, a hundred mouths yelling fake news can undoubtedly impact a mind that isn’t well informed by the govt. Any harmful effort of political partiesto disseminate rumors about a scheme should be thwarted by the efforts of spreading the reality made by the ministers. Now, the time has gone when lolling in air-conditioned rooms was all a minister was supposed to do. India is terribly hankering for a change, and gale of reforms in all departments for a better future with opportunities, and peaceful ambience.

A protest can’t be a safe haven for rioters and political scoundrels wearing saffron shawls purposefully to vilify the saffron party and Hindus, trained for making India chaotic to make public recall the delusion sense of good days under the prior ruler. A chaotic country is always either a failure of the present ruler being too gawky to use his power adequately, or a conspiracy of the opposition parties that managed to burn it down, befooling, instigating and using public to clinch the chair. Youngsters of this era are immensely fed belligerence and defiance, this sense of being audacious is being served by the movies for them to gobble it. Once enticed, they can behave as per the stimulation which is now being a prime priority in the academies, institutions funded by political parties. No doubt why army aspirants failed to perceive the Agnipath scheme on account of distorted information about the scheme, getting abetted by the politically assembled mob, ended up screaming on the roads, burning trains, vandalizing the stations, shops that led them to lose their chances of becoming soldiers as the Indian army has recently stated that it doesn’t want violent elements, it wants disciplined aspirants. Anyone involved in vandalism is never going to be inducted into the army at any cost. They have been abominably used as scapegoats but they can’t realize it until they face the musiclegally for all the destruction of public property.

It transpired that Agniveer protests were initially planned by the institutions in Bihar where teachers are inclined to be uncontrollably haters of the ruling party being secretly supported by other opposition parties. As a result, violence was sinisterly planned, conducted and exhibited to express the ire. At this juncture, a protest is covertly ventriloquized by politicians who are unbelievably devastated, to evince what their pain is making them do to savor power again even if it demands them to set everything on fire, however, gullible youngsters unaware of this political conspiracy are now traumatized after the govt took strict actions against vandalism. This is a detrimental definition of Indian politics which is now based on lies, rumors and violence, not development, employmentas the entire opposition is desperate to defeat an invincible warrior of Bjp. Hench, now every unnecessary protest is categorically sheer obstinacy of these political parties to ignite the flames of ruckus by fanning ire against the govt which is infact a wall built to protect Hindus and Hindu faith. For, their smoldering desires eitherto rule or break this nation are yet to be extinguished.