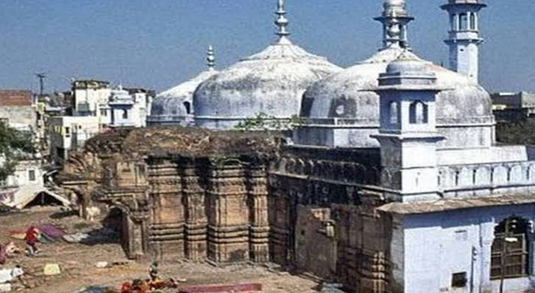 The temperature in India pertaining to the temples buried underneath the mosques is being accelerated everyday as the Hindus community is determined to unearth the truth that had been buried by the Islamic rulers who demonstrated their intolerance and hatred through monstrosity against Hinduism, dismantling the magnificent temples and built the mosques over them which have been continuously serving for decades as a disdainful reminder for Hindus to feel ashamed of their helplessness that couldn’t protect their shrines, and had to endure the pain of knowing the truth which tells them how hatefully the idols of their deitieshave been confined in the basements of the mosques and they couldn’t even fight for them even after centuries and decades in democratic country.

Currently, the case to unlock the truth that silently resides in the basements of a mosque that stands next to the Kashi Vishwanath temple with a Sanskrit name, is currently a sweltering news. As the Allahabad high court has issued an order to conduct videography of the entire mosque including its locked basements which are claimed to be the confinement of the truth that Hindu community wants to know. The Mosque Gyanvapiis in fact a disputed land. It’s because the name of the mosque is also an evidence of the barbarity of the cruelest monster Aurangzeb. Gyanvapi is an amalgamation of two Sanskrit words Gyaan (knowledge) and Vapi (water reservoir) meaning the reservoir of knowledge. The reason behind its name was a well that was inside the temple premises adorned with beautifully carved pillars which were radically dismantled and razed down by the radge islamic ruler and built this mosque without changing its name that clearly implies his scoffing attitude towards Hinduism. Changing the names of cities, destroying themarvelous temples, giving broken idols to butchers to use as weights, torturing Hindus inhumanely for refusing to embrace Islam, and then feeding their decapitated body to the dogs, was factually a documented hobby of psychotic Aurangzeb.

The mosque stood over temple, confining its residues in the basements. The name wasn’t changed for a vile intention to remind Hindus everyday when they visit Kashi Vishwanath temple of an agony which Aurangzeb had given, that despite all proofs of the temple Hindus can’t do anything except sulking unblinkingly looking at the Nandi statue silently glancing at the mosque, relentlessly serving as an adamant devotee of Mahadev who refuses to give up, and is still waiting unabated for Mahadev. Although the Kashi Vishwanath temple has been reconstructed and decked up elegantly, yet the glory of the temple is not completely restored.

In a couple of days, Varanasi is witnessing tense atmosphere due to the legal process happening in the disputed land and Muslim opposing this. Nonetheless, no kind of obstruction is seemingly possible in Uttar Pradesh as the law and order has been improved and strict under Yogi. There is certainly not the prospect of communal tension, so legal process can’t possibly hindered by any citizen. And the truth is all set to creep out, destroying all the opposition of Muslims that claim no hindu temple was on the disputed site, despite knowing the history that explains how Aurangzeb destroyed temples not only in Kashi but also everywhere he thought Hinduism was a threat to his religion.

On the historical note, the mosque stands over the actual hindu temple with a wall designed with hindu architecture and gracefully carved pillars behind it facing the newly built Kashi Vishwanath temple, and Nandi statue. On the wall sit the curvy designs replicating the actual entrance of hindu temple with some dancing idols which have been decapitated with hammers and chisels and few exquisitely engraved pillars insinuating the supporting parts of the temple. The wall could easily have been covered by the domes that sit on the top of the mosque when it was built on decree of Aurangzeb, but it’s not hidden. It’spatently perplexing. Instead, the wall was perhaps left intact deliberately in order to indirectly affront Hindus routinely, exhibiting the Islamic annexation over a temple. Moreover, the wall is unquestionably a witness of the demolition carried out by Aurangzeb, nonetheless Hindus couldn’t claim their right over the disputed land for decades. For, the democracy of India is too fragile when it comes to meddling the Islamic monuments built over the claimed hindu shrines. The judiciary is also reluctant to accept anything except a distorted form of history which has brazenly titled Aurangzeb as a great emperor despite his barbaric history of killing millions of Hindus, and destroying the countless temples on account of unbridled ire against Hinduism.

The wall is the first witness of Islamic intolerance against Hinduism, reminiscing us of what historians, politicians, and seculars bewildered us about, and mocked us for. The truth that’swell hidden under the disputed land, is undeniably a threat to the secularism and historical reputation which was extravagantly created by historians sponsored by the political party obsessed with Islamic glorification. Therefore, incessant attempts to ridicule the demands of hindu community claiming their rights over the disputed mosque in Mathura and Kashi like Ayodhya, are brazenly made to deride Hindus, gladdening the Islamists and conniving with politicians to deter Hindus and make them accept the fictitious version of history replenished with blatant lies, and abandon their hope of vivifying the Hindu glory decimated by the Islamic rulers.

The domes of the disputed mosque with the Hindu architectural features of the wall are apparently a  condescending symbol of inexplicable shame for Hindus, depicting our helplessness that forced us to lose our temples, glory, and our pride which we couldn’t snatch back even after centuries of Islamic reign. However, there is a crystal clear indication coming from the awakened hindu community that opposed to believe in the history dashed off by liars, and oppugned to get enslaved by secularism that shackles them and paralyzes the spirit required for this fight against the mental slavery sitting on the domes of the mosques built over ancient splendid temples.

In coming days, the truth chainedin the dark latent corners underneath the disputed domes will be unveiled, and rapidly dispersedacross the nation, questioning the lies of historians and those who always refused to let anyone question history of India and had a penchant for silencing the dissenting voices with political power in order to solace those people who are extremely allergic to the truth, but the truth will come out, stretching its stiffed armscaused by manacles of historical lies, graciously with the sun one-day and incinerate all the sophistry, lies, and confusticated history in a jiffy.