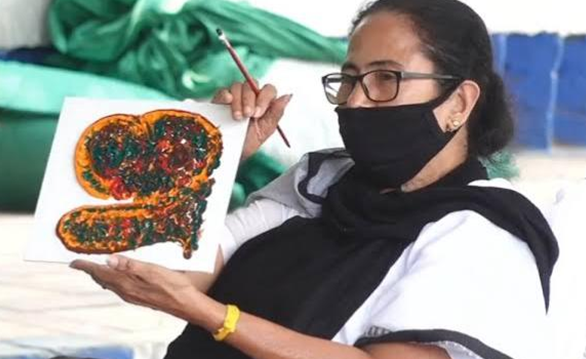 On the occasion of 161th anniversary of the literary legend Rabindranath Tagore, the Bangla academy has astounded India by its decision to honour West Bengal CM Mamata Banerjee with a special Bangla academy award for her unknowntireless literary pursuit despite her fictitiously known contribution in other fields. The education minister of Bengal who happens to be the president of Banglaacademy, said that a panel of eminent writers has decided to confer this award introduced by Sahityaacademy this year on her for her book‘KabitaBitan’ which pays tribute to the best writers of Bengal.

This is a fresh, but eye soring example of the situation when a party paralyzes the system, and inject a new culture of honouring the one who has clearly nothing to do with art and literature. Her power has not only bedaubedBengal with shame umpteen times through violence and political terror which is routinely seen in the state, but also is now insulting the great writers, and artists of Bengal whose art and writings have glorified the state and immortalized the Bengali culture, art and literature which had coerced the world to recognize Bengal and honour it with Nobel Prize. The ruling party TMC is restlessly making strenuous efforts to inject Mamata Banerjee in every field in order to immortalize her name in the annals of Bengal like other legends.

A couple of times, she has been portrayed as Durga to justify her ruthless politics against unapologetic Hindus with an agenda to cajole and gladden her vote bank. She has also been compared to the legends of Bengal like satyajit ray, Bose and Tagore by the TMC platoon in hoardings hanged on the streets of Kolkata. However, the reality calls it juxtaposition, for it apparently is. TMC govt must tell their vociferating leaders to elaborate her contribution to the art and literature in the parliament so that even the central government can get an epiphany and stop honoring the poor, and hard working people for their unmatchable contribution to the nation in various fields. It’s not because they don’t deserve to be awarded, respected, recognized and admired by the nation for their selfless work, instead, just like Bengal govt, the central govt must show their power and confer theprominent awards on the undeserving politicians for their cacophonous recitation of legendary poems, and their blemished art like Mamata Banerjee. For power can do anything. And power can get anyone who doesn’t even deserve it, awarded by a significant academy.

Her relentless efforts of smearingBengal with shame, engraving her name in every field has been orchestrated several times through political murders, terror, and communal violence. Still no extreme criticism has been noticed from any side which has apparently strengthened her penchant for elevating her desires to meddle with those things that are significantly an quintessential symbol of prevalent Bengali culture andits enriched glory. It is undeniably a hard strike on the culture which TMC is continuously tarnishing with its inappropriate politics, affronting every prestigious award and dismantling a glorious symbol of Bengal.

Although TMC is definitely too scary for Bengali people to oppose anything the govt does fervently, yet the intrepidity for which Bengal has been famous for decades, is utterly intact in some of the writers, journalists and artists who haven’t knelt down to TMC and its political terror. People are simply watching TMC snatch all institutions, and domesticate the powerful people to muffle the dissenting voices. Govt is fixated on displaying its power and stupidity by awarding CM whose art is undoubtedly like a bubble of dirt on a rose petal. Awarding her for her contribution to the art is totally ridiculous and an insult to legendary artists of Bengal whose art is intriguing the world and mesmerizing the art lovers internationally. It is a sheer insult of the writers whose words travelled miles to reach new lands and quickly established its prominence everywhere.

While the central govt has been awarding people working on the ground and bestowing them fame for their valuable contributions to the nation since 2014 changing the Congress culture that was interested to reward only elite and govt friendly journalists and writers, Bengal is awarding an artist with no art, a singer with no rhythm deliberately snubbing the Bengali artist, and singers. Although even insulted people are not willing to speak up and oppose this insanity of govt that is a reminder of Nehru and his Bharat ratna event, yet a Bengali folk researcher and author of at least 34 books, Ratna Rashid Banerjee decided to return her prestigious “Annadashankar Roy SmarakSamman”that she had received in 2019 from the PaschimbangaBangla Academy and strongly accused it of deliberately setting a disgusting example by conferring this special award on chief minister Mamata Banerjee. She further explained why she returned the award as she felt unbelievably insulted by the decision of academy to honour a political dilettante, insulting the entire writer fraternity.

The govt ought to protect the integrity of art and literature of the state by creating an indiscriminative environment for all the people who dedicate their entire life to enhance the cultural glory of the state, on the contrary, TMC govt is continuously and deliberately tarnishing its image and forcibly injecting politics into it. For an amateur poet, and titular artist CM Banerjee, award is allocated trampling the relentless efforts and works of authors and connoisseurs. For the time being, The central govt is tirelessly toiling to reach in every nook, and corner of India to find the real, proud and honest contributor in every field comprising of health, education, agriculture, environment, folk, art, music and etcetera, conversely TMC govt is uncontrollably agog to set a despicable example to tell the world that now awards are in fact not for the real heroes who are outright dedicated to the art, and culture, but actually for the one who possess political power, and have unfathomable hunger to get their conceit massaged for amusement and political haughtiness against the rivals. Conclusively, it is a downright disrespect of all Bengalis which TMC is insanely obsessed to flaunt, willing to never desist, and is cruelly dismantling the edifice of magnificent Bengali culture, art and music unabashedly, and unabated.