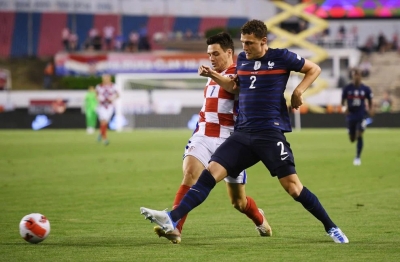 Substitute Andrej Kramaric converted a late penalty as Croatia denied France three points with a 1-1 draw in their UEFA Nations League Group A1 match in Split, while former European champions Denmark defeated Austria 2-1 and Kazakhstan overcame Slovakia 1-0 in the other matches.

Going into the match, both Croatia and France were reeling from defeats in their previous matches and that produced a cagey opening to the game. However, with France coach Didier Deschamps making 10 changes following his team’s loss to Denmark, it was no surprise that it was the hosts who ultimately carved out the first real opportunity.

Mateo Kovacic’s through ball split the French defence, though Ante Budimir’s first touch forced him slightly wide and his eventual shot was straight at goalkeeper Mike Maignan. Les Bleus then grew into the match as the half wore on, and both Moussa Diaby and Aurélien Tchouameni forced saves from home goalkeeper Dominik Livakovic in just under a minute as the interval approached, said a report on UEFA’s official website.

Croatia started brightly after the restart, but it was Les Bleus who opened the scoring with a well-worked team goal. Adrien Rabiot and Wissam Ben Yedder exchanged passes just inside the Croatia half, with the Juventus midfielder outpacing Josip Juranovic down the flank and expertly picking his spot with a cool left-footed finish.

In response, Croatia captain Luka Modric attempted to mark his 150th appearance for the national side with the equaliser, but Maignan was equal to the Real Madrid midfielder’s curling effort.

Nevertheless, just when it appeared that time was running out for Zlatko Dalic’s charges, Jonathan Clauss — only just on as a substitute — sent fellow replacement Kramaric tumbling in the box, and the Hoffenheim forward kept his cool to slot home the resultant spot-kick, sending Maignan the wrong way.

There were chances to win it in the closing stages for both teams, but neither Antoine Griezmann nor Luka Sucic were able to find the target.

Denmark made it two wins out of two in the UEFA Nations League as Jens Stryger curled in a classy late winner to earn his side victory in Austria.

Having secured impressive victories on Matchday 1, both sides looked in a confident mood during an opening period scant on chances in Vienna.

That would change when Christoph Baumgartner collected a raking pass from home captain David Alaba and crossed for the unmarked Sasa Kalajdzic in front of goal, the Stuttgart forward going agonisingly close to prodding the opener.

Austria would rue missing that chance when a neat passage of Denmark passing gave Rasmus Kristensen a crossing opportunity from the edge of the penalty area, the ball deflecting into the path of Pierre-Emile Højbjerg, who swept his side ahead with a ruthless finish.

Yussuf Poulsen would have made it two but for a smart close-range save from debutant Patrick Pentz, and Alaba almost scored directly from a corner, Schmeichel tipping his vicious effort over the crossbar.

Ralf Rangnick made three changes at the break in a successful effort to threaten Denmark more, sending on Marko Arnautovic for his 100th cap in a bid to provide more presence inside the penalty area.

The changes paid off when fellow substitute Michael Gregoritsch pounced on uncertain defending and allowed Arnautovic to tee up Xaver Schlager, who fired a clinical equaliser.

Denmark almost regained the lead when Christian Eriksen hit the post via Pentz’s fingertips with a spectacular long-range effort, and Arnautovic also had a shot denied by the woodwork three minutes later.

There was no such frustration for Jens Stryger, who curled a superb winner beyond Pentz from distance with six minutes remaining to send Denmark three points above their opponents at the top of Group A1.

Among other matches, Iceland were held 1-1 by Albania, Latvia beat Liechtenstein 1-0, Belarus held Azerbaijan 0-0 as did Andorra who played out a goalless draw with Moldova.