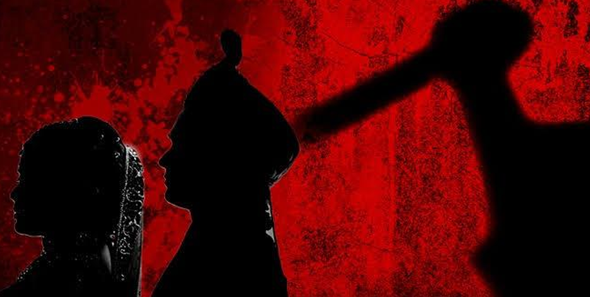 A horrifyingincident took place in Hyderabad where a Hindu man Nagaraju who loved a Muslim girl andlater on, hetied a knot withher in January despite threats and reluctance from her family, was horribly attacked and mercilessly belabored with iron rods by a few Islamic fanatics on the road in broad daylight, when he was going somewhere with his wife on a motorcycle. This incident is not only a serious matter of fanaticism and honor killings, but also bedaubs us with an indelibleshame for being too inhumane even at the time when a lover is lynched in front of people and all they do, is watch this Islamic lynching happening unabashedly on the road. The wife identified the killers, revealing oneof them was her own brother and attempted to stop them from killing her husband, begged people to help, nonetheless, humanity was already throttled and buried in those shameless eyes which watched Islamic fanatics kill the Hindu boy, and pushing the girl aside to behead him outright until their anger to erase his existence culminated.

The video istoo heart wrenching to watch it even for a few seconds, and what is more terrible, isimagine the plight of the girl who saw herfanatic brother with his friends attacking her husband with rods and smashing his head into smithereens like monsters, yet no iota of penance or self loathing seemedto exist in those monstrous eyes of killers fearlessly lynching a Hindu only for loving a Muslim girl in a country where Supreme Court says that the onus to protect inter faith lovers is on them, still fails drastically when it comes to protecting Hindu boys and girls.

From Bollywood to politics, it’s routinely practiced to promote inter faith marriages and needlessly blame those who oppose it with the evidences of its efficacy. When Hindus talk about love jihad which is highly detrimental agenda propelled by radical Islamists to beguile Hindus girls and make them convert, preparing them forliving sexual slavery. Subsequently Actresses, politicians and liberals instantly label it hate, and rancorouslybesmirch Hindus for spreading hate against Muslims. However none of such hypocrite breeds can be seen anywhere now and find real hate in this case. When Hindu girls who are wooed and fobbed off by Muslim men, end up getting raped by family members of their husbands, and being confined in the suitcases. No outrage to condemn this hate against Hindus is seen. All the secularism is dead when love jihad happens. When Hindu girls are coaxed and mentally enslaved by old Muslim men, and then killed, burnt or dismembered after months of marriage.

Interfaith marriages are evidently harmful only for Hindus. As it’s reallyapparent that it’s Hindus who suffer afterwards. It’s because a Hindu girl marrying a Muslim man is deemed secularly progressive, ignoring the consequences and fanaticism that secretly lingers in Muslim’s mind, buta Hindu boy marrying a Muslim girl is deemed Islamic insult by fanatics. So the fate of hindu girl is limited to suitcase, and Hindu boy is brutally murdered for the love. Only hindu pays the price for this love which liberals like to promote enthusiastically through advertisement, movies, or books.

This selective outrage against such grisly crimes of Islamists is undeniably a threat to humanity. In India, the lobbies of seculars and liberals are only aggressive towards the meek Hindus. If what happened to this Hindu man had happened to a Muslim lover, the outrage would have been tumultuous across the nation, but this happened to a Hindu, outrage byevasive liberals is pretty like a sugarcoated condemnation which has a purpose of not hurting Islamists anyhow and slink out without being called hypocrite. Notwithstanding, their hypocrisy is well known now. These loud throats of such writers, actors, journalists and politicians brimming with hatred for Hindus and bigotry are hearableonlywhen they descry the victim’s religion.

All despicable plans of Islamists against Hindus contain love jihad, and honor killings. And these agendas are crystal clear, yet it’s an elusive task toinjectit in Hindu girls blinded by secularism that tempts them to elope with polygamous Muslim men who are trained and advised to honeytrap minor girls who lack maturity and understanding to decipher these sordid plans, therefore, hundreds of love jihad cases have been reported where girls were madly besotted with old Muslim men, and refused to accept anything less than death which came out afterwards. However, love jihad is not taken seriously as oftentimes Bollywood with Islamists promote it vigorously to thwart strenuous efforts of Hindus to disseminate awareness in Hindu girls in order to save them from these dangerous snares woven with the wool of entangled love. This is an quintessential clue of communal proliferation and snobbery.

In such marriages, Hindu boys and girls are killed for the love they think is powerful enough to conquer all, but they fail when it comes to winning an Islamic heart laden with hate and Kafirs concept which fanatics can’t possibly overcome in their entire lives. A long list of Hindus killed for loving Muslim girls can be presented and unveil the hate which neither liberals want to talk about, nor wantus to know which comfortably thrives under secularism. This is categorically a tale of hypocrisy where love for Muslims demands Hindus to be killed and raped. Where their killings don’t ignite any visible outrage, protest or something which can possibly called ‘Rage against hate’. All of this is continually happening in a country where democracy is supposed to rule.

In the meantime, when outage against these communal lynching by highly fanatic Islamists must be demonstrated by all,irrespective of religion, political differences, and ideologies, instead, something more shameful is happening here. Self claimed unbiased, and secular journalists and media houses are brazenly attempting to dilute the matter by dimming it with incredible hypocrisy to veil the communal hatred that lives in Islamists.

A ndtv editor has been caught propelling an agenda to whitewash this Hindu lunching as the killers belong to their favorite community which is factually considered to be a certificate of secularism and liberalism. Ergo, She has urged people not to communalize this murder in order to cleverly paint Muslim killers with their famous evanescent ink of innocence which is brilliantly removed by the courtsafterward. These type of journalists are basically not known for journalism, and probity that is meant to be their first trait, instead their prevalence is for being insurmountably bigot, and hate monger who are lionized by Islamists for communalizing a theft, murder, and rape, in order to proffer them the chances to affront Hinduism, and try to blacken the image of Hindus in the country. On the contrary, they are meek and scared, yet they prevaricate to say anything on such sensitive topics fearing the aftermath, when they are coerced to confront their hypocrisy, wherefore, they condemn such killings with less hurtful adjectives which they are clearly not fond of, in order to avoid any conflict or opposition from Muslims. We are all aware of thefact why they are socoyly timid, when the killer belongs to Muslim community and ironically it is called Indian secularism.