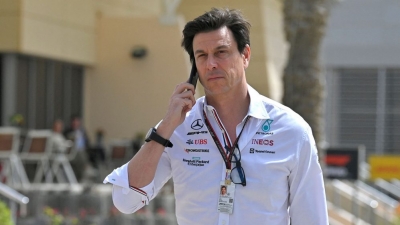 Toto Wolff has thrown his support around driver Lewis Hamilton after the seven-time world champion suffered another frustrating race at the Monaco Grand Prix, finishing in P8.

And the Mercedes team boss insists that it is only a matter of time before the “pendulum swings” in his driver’s favour after so many “unlucky situations”.

Team mate George Russell came home fifth in Monaco – to continue his streak of finishing in the top five in every 2022 race so far – and lies fourth in the drivers’ championship with 84 points – while Hamilton is sixth with just 50. But Wolff believes that despite the gap, his two drivers are “very much on the same pace”.

“I think when you look at the bad spells that Lewis had – I mean look at the race today, stuck again, contact with Esteban [Ocon], stuck behind Fernando (Alonso),” said Wolff.

“The red flag yesterday in qualifying and then you know what happens in races before. I think the pendulum will swing so that these unlucky situations will stop with Lewis.

“He could have been right there and closed on Lando’s (Norris) pit stop window or even fight with George and Lando in the front because that was his pace. They are very much on the same pace, one practice the one leads, then the other, and that is great how also they work together to get our car straight, because we need to get that car straight.”

Mercedes went into the Monaco weekend with huge optimism after a strong performance in Barcelona, but having struggled to keep up with Red Bull and Ferrari, Wolff was asked whether his team’s issues were track specific. The Austrian says they are simply not as quick as their rivals, which he believes is unacceptable.

“If the problem is that we can say well that this is a track where it’s going a little bit better like it was in Barcelona or a track that is worse like in Monaco,” said Wolff.

“I think we are the third team. We are not second and we are not fourth. We have two extremely strong drivers but it’s a huge annoyance for all of us that the gap is about the same. If you are looking at it optimistically it’s five-tenths, if you are looking at it pessimistically it’s more like eight-tenths. And that is clearly for all of us at Mercedes, not acceptable.”