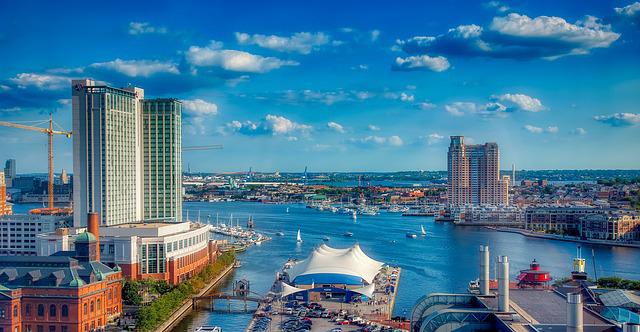 Baltimore is a popular tourist destination in Maryland, in the Mid-Atlantic region of the United States of America, near Washington, D.C. It is perhaps most famously known historically as the city where Francis Scott Key wrote the lyrics for the Star Spangled Banner during the Battle of Baltimore of the War of 1812. Today it has become a major center for tourism and travel. Local highlights include excellent seafood (steamed blue crabs, raw oysters, Maryland crab cakes, and Maryland crab soup) and Camden Yards (the first “retro” major league ball park and where the Baltimore Orioles play). Baltimore possesses a vibrant arts scene with the largest free arts festival in the US (Artscape) occurring annually in July, a renowned arts museum American Visionary Arts Museum that is dedicated to outsider art, and the Maryland Institute College of Art and the Peabody Institute of Johns Hopkins. It is also home to Johns Hopkins University, Morgan State University, University of Baltimore, Loyola University, Goucher College, and the Notre Dame of Maryland University.

Baltimore lies within the humid subtropical climate zone, and weather is primarily affected by three factors: its proximity to a warm marine estuary, its low elevation, and the wall of mountains to the west and northwest. These factors make the area’s climate milder and less extreme than other U.S. cities at this latitude. Summers are humid and hot, but not extremely so, with highs reaching the high 80s to low 90s Fahrenheit and lows in the 60s to low 70s. Winters are cool to mild and moist, with highs in the upper 40s to low 50s, and lows in the 30s and 40s. It is almost never below 10°F in the city proper. Light snow can sometimes fall in winter, although some years there is no significant accumulation and once every few years a coastal storm can dump 8 inches to a foot of snow on the city. Spring and fall bring pleasant temperatures in the 50s-70s(°F), and southern breezes.

While weather in the region can vary, Baltimore does not experience the extremes of weather change that occur further north and inland. Visitors will be able to venture outdoors without a jacket from approximately mid-March to late November. The hot humid summers invite the wearing of shorts on many days. The Baltimore area experiences pleasant fall foliage, usually beginning in mid October and ending in early December. The long warm weather season means that swimming pools are very popular for much of the year as well.

Things to see in Baltimore

As Baltimore is a predominantly African American city, there are many opportunities to experience African American history in this town. The most prominent is the Great Blacks in Wax Museum located on East North Avenue in East Baltimore close to Johns Hopkins University. This museum showcases African American History through art. Another site of interest may be the Reginald F. Lewis Museum of Black History located close to the Harbor Area.

The Baltimore Harbor is the busy center to the city, a major tourist attraction, a must-see, often featuring live music by jazz groups and crooners and plenty of eating and shopping. While locals scorn the Inner Harbor as a pre-fabricated tourist mecca devoid of true Baltimore culture, visitors should see the harbor, and especially should visit some of its excellent museums and other attractions. Highlights range from the Historic Ships in Baltimore (including the USS Constellation), the kid-mesmerizing Maryland Science Center, to the popular and enormous National Aquarium, to the radically eccentric American Visionary Arts Museum.

The tourist district of the Inner Harbor is a great destination, where you will have a great time. But it is oddly ahistoric in one of America’s most historical cities. The most prominent historical attraction is Fort McHenry across the harbor at the tip of Locust Point. It gained an iconic status in American history by successfully defending the Baltimore harbor from the British naval bombardment in the War of 1812, at which time Sir Francis Scott Key was inspired by the tattered but still waving American flag on the fort to write the poem that would later become the national anthem, the Star Spangled Banner.

The other very rewarding historical destination in Baltimore is just east of the Inner Harbor in Fells Point, once a separate town founded in 1730, which became wealthy throughout the 18th and 19th centuries on shipbuilding and the maritime trade (and anti-British privateering). Architecturally, little has changed for more than a century, and the cobblestone streets, old pubs, and quaint harbor area are more than enough to lure visitors.

While you won’t run out of attractions to visit in the Inner Harbor, there are many attractions throughout the city that you should not miss. Look especially for Westminster Hall and Burying Ground Downtown, the Maryland Zoo in Druid Hill Park, the original Washington Monument and the Walters Art Museum in Mount Vernon, and the Baltimore Museum of Art up by Johns Hopkins University.

Baltimore Basilica, 409 Cathedral St, Baltimore, MD 21201 (A few blocks north of Inner Harbor), ☎ 410-727-3565. 830-430. Benjamin Latrobe was the architect for this incredible cathedral, built in neo-classical style. Latrobe went on to redesign the US Capitol after it was burned by the British. The first Catholic Cathedral in the United States, the building has been completely restored. Docents are available to give free tours, or you may walk around on your own. The dome, whose design was influenced by Thomas Jefferson, is worth the visit, even if you don’t have time for a tour. Be sure to check out the undercroft, where the large brick foundations that support the dome are clearly visible. Architectural and religious beauty… this place has it all… right in downtown Baltimore.

Things to do in Baltimore

The Baltimore Orioles  are the city’s Major League Baseball team, playing their home games at the lovely Camden Yards.

The Baltimore Ravens, the city’s National Football League team, play their games at M&T Bank Stadium. Consistently one of the best teams in the NFL, they have been known for their ferocious defense.

Baltimore is famous for being hometown of the Greatest Olympian of All Time: Michael Phelps, who used to train at North Baltimore Aquatic Club.