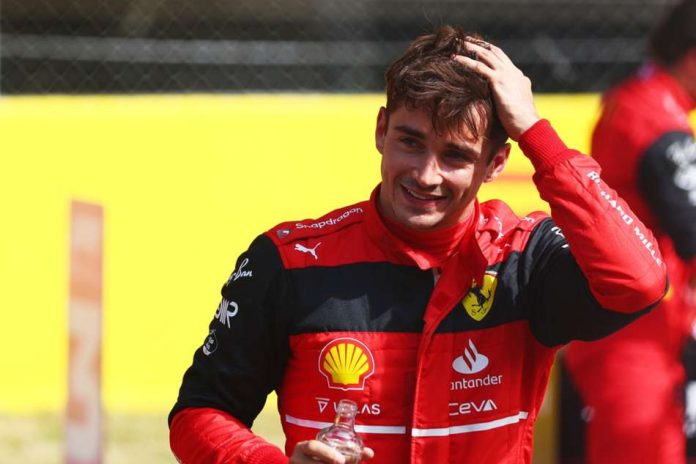 Charles Leclerc of Ferrari overcame a spin to take pole position for the 2022 Spanish Grand Prix, as defending drivers’ champion Max Verstappen lost out his own shot at pole due to some technical issues.

After Leclerc topped the first qualifying session (Q1), Verstappen hit back with the fastest time of Q2 — with Mercedes lurking just behind the Ferrari and Red Bull throughout the first two qualifying segments. Leclerc then dramatically spun on his first run in Q3, leaving Verstappen top.

But the championship leader Leclerc re-emerged to go top with a time of 1m 18.750s. Verstappen was storming towards his pole time – before his Red Bull appeared to suffer an issue. The reigning champion lost out by an eventual 0.323s with local hero Carlos Sainz another tenth off in third.

George Russell smashed his first sector to pip Sergio Perez to P4, the Mexican rounding out the top five ahead of Lewis Hamilton in the other Mercedes.

Valtteri Bottas showed a strong pace throughout and finished seventh while Kevin Magnussen took eighth – his 10th-placed teammate, Mick Schumacher, making it to Q3 for the first time – with Daniel Ricciardo in P9 for McLaren between the Haas pair, according to a report Formula 1 website.

Lando Norris had his Q2 lap time deleted for a Turn 12 track limit infringement and ended up 11th, followed by Alpine’s Esteban Ocon and then the AlphaTauris of Yuki Tsunoda and a despondent Pierre Gasly in P13 and P14, respectively. Zhou Guanyu was off the pace in Q2 and could only qualify at 15th for Alfa Romeo.

In their heavily upgraded Aston Martins, Sebastian Vettel and Lance Stroll qualified 16th and 18th, respectively – Vettel having missed out on Q2 by under a tenth.

Between them was Alpine’s home hero Fernando Alonso, the two-time champion a surprise exclusion for Q2 in P17. Williams rounded out the provisional qualifying standings: Alex Albon P19 and Nicholas Latifi P20.