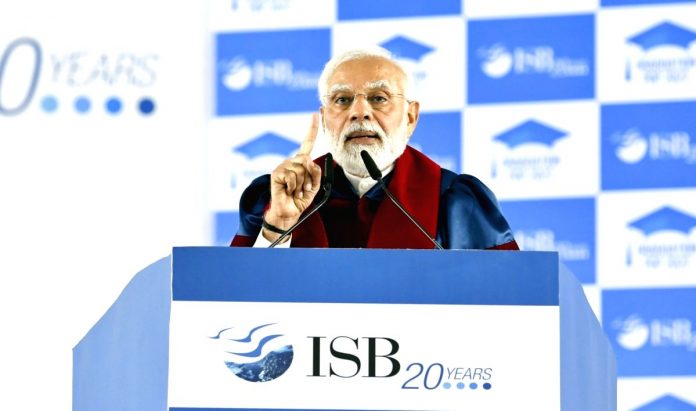 He said during the last eight years, the government with the political willpower brought reforms and they yielded results on the ground due to people’s participation.

He said this while addressing 20th anniversary celebrations and graduation ceremony of the Post Graduate Programme of Class of 2022 at the Indian School of Business (ISB) here.

Addressing students of both Hyderabad and Mohali campuses of the ISB, he said that while the need for reform was always felt in the country, there was always a lack of political willpower.

“Due to the continuous political instability in the last three decades, the country has seen a lack of political willpower for a long time. Because of this the country stayed away from reforms and from taking big decisions. Since 2014, our country is seeing political will and also, reforms are being done continuously. We have shown public support and popular support is assured when reforms are undertaken with determination and political will,” he said.

He cited the example of adoption of digital payments among people. He said in a country where banking was considered a privilege, fintech has changed the life of the common man. He pointed out that today 40 per cent of the world’s digital transactions are happening in India.

The Prime Minister noted that today, India is the fastest growing economy in the group of G20 countries. In the case of smartphone data consumers, India is at number one. India is second in the world in terms of the number of Internet users. India is also second in the world in the Global Retail Index. The world’s third largest start-up ecosystem is in India. The world’s third largest consumer market is in India.

He claimed that even amid Covid pandemic, India proved its resilience. The century’s biggest health crisis disrupted the global supply chain and the war added to the problem.

“Despite all this India is emerging as a major centre of growth today. Last year, the highest ever recorded FDI came into India. Today the world is realising that India means business.”

Modi said it was not the success of the government alone but business schools like ISB, professionals who passed out from such institutes and youth played a big role.

“Be it start-ups or traditional business, manufacturing or service sector, India youth proving they can lead the world. Today, the world is looking at India’s youth with confidence and respect,” he said.

The Prime Minister pointed out that Indian solutions are being implemented globally. “Today on this important day, I would like to ask you to link your personal goals with the goals of the country,” he told the business graduates.

Modi said that resilience and strength of the health sector was proved during the pandemic. He recalled that there were no PPE manufacturers but the country produced 1,100 manufacturers and the Covid infrastructure in no time. There were only a couple of labs for testing but the number went up to 2,500.

“Regarding the Covid vaccines, concerns were being raised here whether foreign vaccines would be available or not. But India developed its own vaccines. In India more than 190 crore doses have been administered. India has also sent vaccines to more than 100 countries of the world,” he said.

Referring to the expansion of medical education in the last eight years, he said the number of medical colleges increased from 380 to over 600 while the number of graduate and post-graduate medical seats went up from 90,000 to over 1.50 lakh.

The Prime Minister stated that bureaucracy has also made firm contributions in the reform process.

“System is the same but results are encouraging. People are coming forward to increase the pace of reforms. When people cooperate, quick and better results are assured. In the system now, the government brings reforms, bureaucracy performs and people’s participation leads to transformation,” he said, and advised the ISB students to study this mechanism of reform, perform and transform as a case study and show it to the world.

He also cited the sport ecosystem transformation. He said after 2014 there has been phenomenal performance in every sport due to the confidence of athletes.

“Confidence comes when the right talent is discovered, when there is handholding of talent, when there is a transparent selection and a better infrastructure is available for training, competition. We can see transformation in sports due to reforms like Khelo India and Olympic Podium Scheme.”

The Prime Minister said that the definition of business is changing and its landscape is widening. Formal, informal, small and large businesses are expanding their horizons and giving employment to lakhs and crores of people.

He stressed the need to give more opportunities for growth to small businesses. He said students passing out of business schools can help them in connecting with the new local and global markets and with technology.

Earlier, Modi paid tributes to those who have contributed to take the institute to its current glory. He recalled that former Prime Minister Atal Bihari Vajpayee dedicated this institution to the country in 2001.

Since then, about 50,000 executives have passed out from ISB. Today, ISB is among the top business schools of Asia.

Professionals passed out from ISB are helming top companies and giving momentum to the county’s business. Students from here have created many start-ups and played a role in creating several unicorns.

“This is an achievement of ISB and a cause of pride for the entire country,” he said.