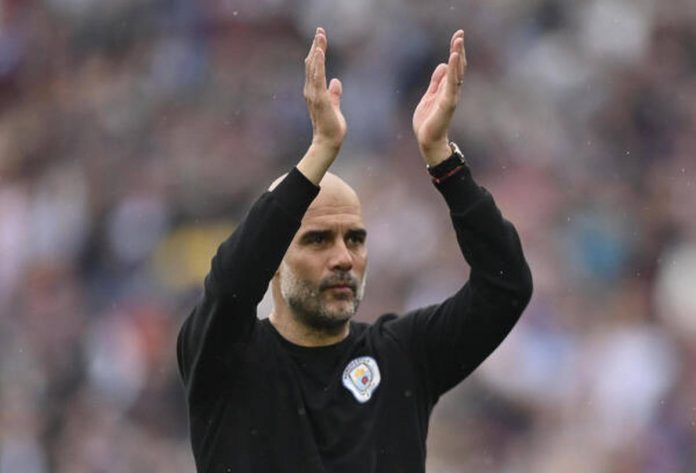 Manchester City head coach Pep Guardiola believes his team could be in the same league as Sir Alex Ferguson’s Manchester United if it wins the 2021-22 Premier League title.

City are on the verge of winning their fourth league title in five years. Manchester United won four titles in five years under Ferguson from 2007 to 2011. City will be up against Aston Villa on Sunday, hoping to grab all three points, as nearest rivals Liverpool are just one point behind and will become the Premier League champions if City drop points against Steven Gerrard’s team.

Guardiola recognized that only United have accomplished this feat, and stated that City will try to join their bitter rivals’ ranks.

“When I arrived, the people here said the Premier League is so difficult, it is the toughest one. Different teams would win, but only Sir Alex Ferguson with United was able to take a lot of championships. When it happened you realised the magnitude of their achievement but now we are close to doing it, being part of that and we have to try to take it,” Guardiola told City’s official website ahead of their match against Aston Villa on Sunday.

The 2022/23 season will mark Guardiola’s seventh campaign at the Etihad. He has already spent longer at City than he has at any other club in his managerial career but the Catalan is confident that his longevity will not lead to fatigue.

The 51-year-old said the quest for silverware and the addition of new players will re-energise himself and his squad and he remains confident City will continue to fight for trophies next season.

“I would say if we had this energy this season and previous ones then why not next season?” he said.

“I think we will be there but at the end of the season we will forget what we have done and I think new players and the competition itself brings this energy. If you tell me next season starts tomorrow, I would say, ‘oh no please give me a break’ but the moment you start pre-season, new players, the first opponent and the second one, then the energy is back,” the coach added.