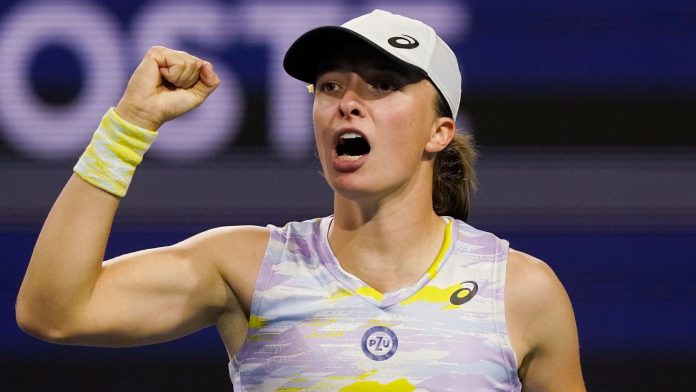 World No 1 Iga Swiatek survived a bruising test to overcome former No 1 Victoria Azarenka 6-4, 6-1 and advance to the quarterfinals of the Italian Open, here on Thursday.

The victory extended Swiatek’s remarkable winning streak to 25 matches, the longest streak since Serena Williams ran off 27 wins in 2015. The victory sets up a marquee match-up against 2019 US Open champion Bianca Andreescu on Friday.

While the scoreline appears perfunctory, Swiatek found herself under constant pressure from Azarenka’s suffocating return game. The 20-year-old needed 79 minutes to complete a comeback from a double-break down at 0-3 in the opening set. Azarenka held at least one break point in each of Swiatek’s service games in the opener, generating a total of 11 break points.

But in the key game of the first set, Swiatek came through a seven-deuce game, wiping out three break chances, to hold for a 4-3 lead. That hold was a part of a five-game run for Swiatek, but Azarenka’s trademark fight never wavered. With Swiatek serving for the set at 5-3, the former No 1 wiped out four set points and broke to get back on serve.

Swiatek kept her cool. By now, the Pole had leveled up her tour-best return game, and she broke Azarenka on her fifth set point to finally seal the set. The World No 1 continued to dominate on return through the second set, breaking Azarenka four more times to close the match and book her spot in a fifth straight quarterfinal. Swiatek finished with 34 winners to 39 unforced errors, while Azarenka fired 18 winners to 31 unforced errors.

Meanwhile, Canadian tennis player Andreescu reached her first WTA 1000 quarterfinal in 14 months, defeating qualifier Petra Martic 6-4, 6-4 in 1 hour and 43 minutes in the Round of 16.

The 21-year-old returned to action in Stuttgart last month following a six-month mental health hiatus, and is making her debut in Rome. In a first-time encounter with last year’s semi finalist Martic, she dealt with the tough challenge of an experienced clay-court expert with impressive sharpness.

No 90-ranked Andreescu’s last appearance in a WTA quarterfinal was also her only previous run to the last eight on clay, at the WTA 250 in Strasbourg last year. This result marks her first WTA 1000 quarterfinal since reaching the 2021 Miami final.

In a clash between two strong servers, the stat sheet illustrates Andreescu’s superiority in this key area and in crucial moments. The former US Open champion landed 72 per cent of her first serves compared to Martic’s 50 per cent and saved six of the seven break points she faced while converting three out of four on Martic’s serve.