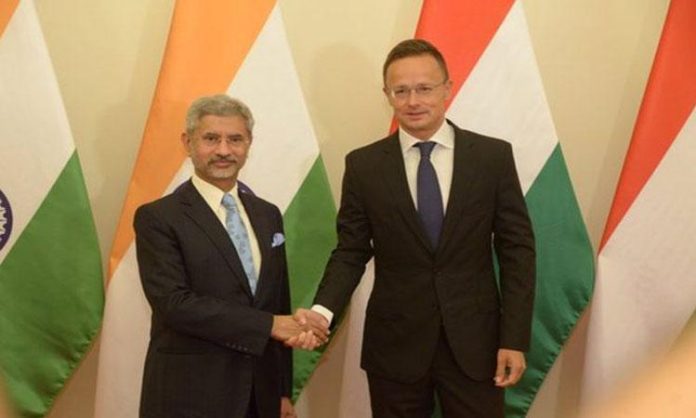 The foreign ministers of India and Hungary on Friday discussed the ongoing conflict in Ukraine and India’s engagement with the European Union.

After the meeting, Jaishankar said, “Valued the assessment of the Ukraine conflict and its knock-on effects in different domains. Also acknowledged Hungary’s steadfast commitment to an expanded Indian engagement with the European Union.”

Jaishankar said that he appreciated the Hungarian support for ‘Operation Ganga’ and discussed admission of Indian medical students in Hungary colleges. He also recalled Hungary’s early recognition of Covaxin and openness to travel arrangements. “Need to strengthen our longstanding cooperation in multilateral forums,” he added.

The Hungarian FM said that the economic cooperation between India and Hungary has been hitting records and last year, a record was hit when it came to the volume of trade. But geographical distance is still considerable, he added.

Szijjarto said that two contracts will be signed-for development of trade and attracting investment. There is going to be an energy supply crisis in Europe and maybe globally, and those countries will be safe who can produce the most of the energy they consume, he said.

Hungary is the newest member of the International Solar Alliance and both countries are working to strengthen bilateral trade and relations.

Minister of State Meenakshi Lekhi and Szijjarto inaugurated a business forum. “Our bilateral trade has seen rapid growth in recent years. This event is a step in realising our full potential in trade & investment & expanding our ties,” Lekhi tweeted