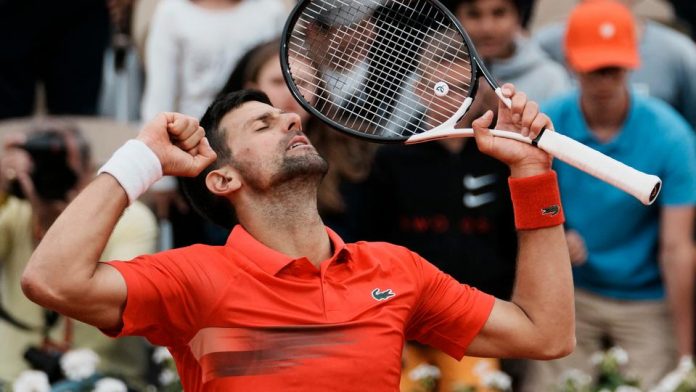 Coached by Marian Vajda, a long-time Novak’s trainer, Alex played well in the third set to stay in touch with world no. 1 and reach a tie break.

Djokovic claimed it 7-4 to emerge at the top and move into the last 16. Novak fired ten aces and dropped serve once from two chances offered to his rival.

The top seed, who hasn’t lost before the third round at this event since 2005, finished the day with 40 winners to 19 unforced errors in picking up his 83rd win at this event.

Molcan arrived to Paris in fine form after reaching two clay-court finals this season in Marrakech and Lyon. But the magnitude of the occasion and relentless baseline play of Djokovic appeared to overwhelm him in the early stages of the match.

The Slovakian’s unforced errors often came in ill-timed bunches during his service games in the first set. He hit three while serving at 1-2 to hand an initial break to Djokovic, then committed another trio of tame baseline errors at 2-5 to hand his opponent an early lead.

Meanwhile, Djokovic encountered few problems on his own serve in the first two sets. The top seed won 29 of 34 first-serve points and didn’t face a break point, freeing him to open up on his groundstrokes and venture to the net for winning volleys. Djokovic broke Molcan once more at 3-2 in the second set and comfortably held three games later for a commanding advantage.

The 24-year-old Molcan offered more resistance in the third set, pumping his fist after taking advantage of a loose Djokovic service game to break at 1-2. But as he so often does, the top seed stepped up when it mattered most. He took advantage of a pair of Molcan forehand errors for a 3/2 mini-break advantage and eventually wrapped up the match in two hours and 15 minutes.

Djokovic hasn’t dropped a set in his first two rounds in Paris since 2010 and has yet to lose a set against Molcan, improving to 2-0 in their ATP Head2Head series.

The Serbian is the top seed at Roland Garros for the fourth consecutive year. He hasn’t lost before the quarter-finals since 2010 and, should he continue that trend this fortnight with a 16th quarter-final appearance in Paris, a blockbuster showdown with fifth seed Rafael Nadal could await.